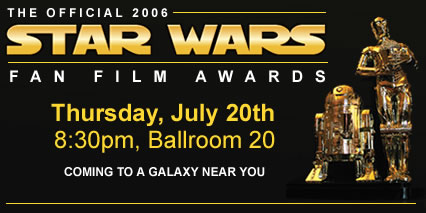 The Star Wars Fan Film Awards return to San Diego Comic-Con International, with the award ceremony scheduled for Thursday night at 8:30 in Ballroom 20. You'll get to see the best of this year's competition, plus an exclusive world premiere especially for Star Wars fans.

For the fifth year, filmmaker finalists vied for recognition and prizes in the competition sponsored by Lucasfilm and Atomfilms.com. The movie judged by filmmaker George Lucas to be the best of the competition will be presented the prestigious George Lucas Selects top prize. The talented filmmaker who wins this prize will receive $2,000 in cash and a distinctive Fan Film Awards trophy. Other category winners will be awarded one of the coveted trophies, plus $1,000.

The film that receives the Audience Choice Award will have collected the highest number of votes from the fans themselves, who cast their votes at www.starwars.atomfilms.com. The winner will take home one of the Fan Film trophies and the honor of knowing that his or her film is a true crowd-pleaser.

In addition to viewing the best films of the competition, those attending the award show will see the world premiere of Volume Two of Return of Pink Five by Trey Stokes. Movies by Stokes created for the Star Wars Fan Film Awards have won both critical and popular acclaim. His first for the competition, Pink Five, was selected by George Lucas as the best of the 2003 competition. Pink Five Strikes Back received the highest number of votes in 2004 to win the Audience Choice Award. Return of Pink Five: Volume One, was released on www.starwars.atomfilms.com. Those attending the Star Wars Fan Film Awards at Comic-Con 2006 will be treated to the very first public showing of Return of Pink Five: Volume Two.

Films entered in the Star Wars Fan Film Awards competition are required to meet set guidelines and performance standards, plus be less than 10 minutes long. The films can be a parody of the existing Star Wars universe, experimental, or a documentary of the Star Wars fan experience.

Congratulations to the ten finalists in the 2006 Star Wars Fan Film Awards: