Bespin refugee - July 02, 2009
"Adult Swim and Robot Chicken creators and executive producers Seth Green and Matt Senreich are celebrating the release of the Robot Chicken: Star Wars Episode II DVD this summer by strapping on a pair of roller skates and living on a tour bus for two weeks just to bring Robot Chicken-style fun to the masses..."

Check out StarWars.com for more details, including a tour schedule. 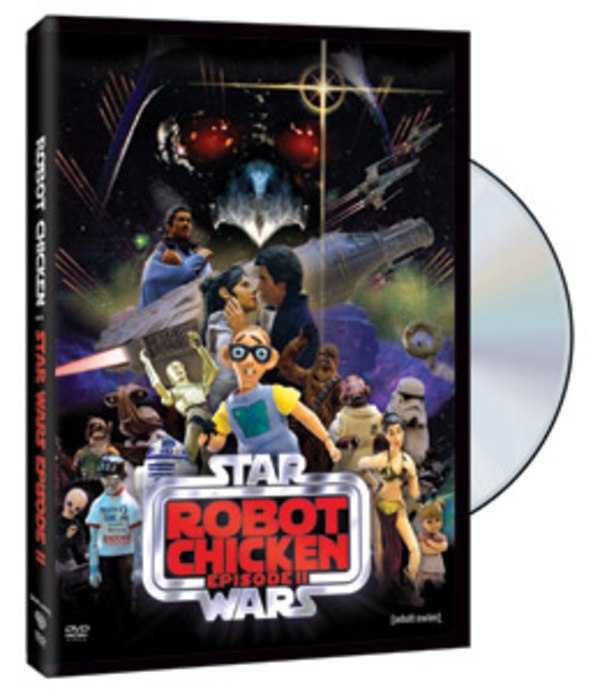 Well whether you agree with the mechanics of it or not, it doesn't mean that it doesn't happen. Sometimes people just get turned off of things when they get too big and too much exposure. Especially the more something gets popular.

People tend to like being different sometimes and having interests that are more unique. Somewhere along the line, if it starts to get too big then they lose interest. I can't explain why seeing that's never been an issue for me, but I've seen it a lot!

I don't imagine the popularity will peak until the sequel. That's when big action movie franchises like this generally do.

I think the popularity of the first movie along with the disgust of a lot of fans over not getting their "more g1" ways did lead to a lot of long time fans quitting collecting. It's just one of the side effects of taking something like this.

I think the thing is, it's one thing when someone doesn't like the new stuff. However, when that stuff gets TOO popular, it gets to where those people actually come to resent it. I used music as an example because it's the classic case of what happened with Metallica. When the black album hit, it was their biggest hit ever and it pissed off SOOOOO many older fans who absolutely loved them and since that album they don't even want to hear another Metallica song again.

You can also see things like this with stuff like Star Trek. Classic only fans who hate the next generation and all the spin off shows.

I don't understand that reaction anymore than anyone else does, but it happens.

And yes, different people have different reasons as well for getting out. I'm not suggesting this is the only reason.

But I mean with the question asked, you can always put up some good ways in which perceptions have changed.

Some people might not feel as awkward or dorky now showing off their love for TF's. Now that it seems every other person is wearing a TF shirt these days.

Or perhaps there were people out there who kinda felt weird having an interest in collecting toys that the new found popularity has helped to ease. It works both ways.

I was wondering (yeah I do that a lot and I know it can be dangerous)....

Now that we've gone through the process of re-popularizing Transformers into the mainstream, has anyone perceptions of it all changed?

You know how some people like a band that few others ever heard of before but once that band gets really popular suddenly they can't stand them.

Now I'm not talking that extreme. Or maybe for some it was.

Come to think of it, I have noticed quite a few long time collectors selling off their rather vast collections. So maybe that's what happened.

Cost of living and gas prices are responsible for that

I'm still trying to figure out if Transformers are truly here to stay, or have simply become an "in" fad again. And if that's the case, what's gonna happen when it's over?

Dude the Transformers have been out for close to 25 years what is this in thing, fad sbout?

Fads last as long as seasons

I think its more of a matter of hard times & people needing cash or just out right getting tired of collecting but not because of the movie if anything the movie just gives them a good excuse and reason to get rid of there stuff at the time due to other hype $$$ wise Right now I think its safe to say transformers is not yet that cool and stilll falls into the dork factor or what not . Yes there is & I think always will be lots of talk when a movie pops up but once its done its done

I guess the one thing I really don't want to see is an eventual fatal crash that brings a lot of the really good stuff we've enjoyed to a screeching halt.

Now I know we've got a long way to go before we see that again, but I can't help but think that time will come again.

Not to mention the upcoming generations may not have as many people who hold that place for TF's in such a high regard as most of us do. Then again, there may somehow be more. We just don't really know.

Ok, on a more personal level, I couldn't be much happier. We're riding the wave from the insanely successful movie that had solid toys, the Animated cartoon is imo the best tf toon ever and the toys look great. I am a bit disappointed w/ the new universe figures; maybe I need to see them in person to appreciate them, but right now I only see myself buying one or two.

Basically, the more money hasbro makes w/ tf, the more money they'll throw at it, in hopes of making more money, so..that works for me. Maybe finding some toys will be a little harder, but I've never not eventually found a tf I wanted.

Plus, hasbro is marketing to a new generation of tf fans, so hopefully the brand will continue for many years to come.

Most of the exclusives I don't care much about, by I do see your point madman.

Plus its suppossed to be coming with a reprint of Marvel TFs#1 and a remastered More Than Meets the Eye DVD. I'd say that's worth it.

But lets put that in perspective a bit. Yeah, the comic is cool but that's not that much. The DVD is totally unnecessary considering just about any long time fan of the original show has probably owned at least several different copies of it already depending on what all they bought for VHS then different DVD collectors sets.

I'd rather just have a nice collectors style box and the comic for a fraction of the markup.

What can I say. It's the sign of the times. Things are extremely tight and getting tighter. Now isn't the best time to start seeing more and more high priced things coming out. I finally got a reissue when I got encore Prime but I would like to have one from Hasbro too seeing that I missed out the last time.

Oh well, hopefully a little good fortune will come my way for a change and it won't matter. Though that is quite the long shot.

I don't think the love for TFs will ever fade for me. While its not the MOST IMPORTANT thing in my life its a hobby that I enjoy and that I'd love for more to enjoy it with me. The 25th Anniversary Prime to me will only be worth it if he has correct size smokestacks. Plus its suppossed to be coming with a reprint of Marvel TFs#1 and a remastered More Than Meets the Eye DVD. I'd say that's worth it.

I also think that many of us who grew up with G1 are now older... As adults there are things more important than Transformers to worry about... Sometimes life is rough and hobbies just going to have to wait...

I'm actually more interested in whether or not at an individual level if you're views have changed at all, or have begun to.

With me, things were great for a long time. Sure there are always things I've wanted but had to pass on at the time, but what I've been seeing lately troubles me to say the least.

I think it's mostly the over abundance of exclusives coming at higher prices. While the trend hasn't quite hit with general retail here yet, they appear to be taking off into the stratosphere with import stuff, and probably soon more convention stuff as well.

I've got that bad feeling that Hasbro's huge price increase for the 25th anniversary Prime reissue will only be the beginning from them. If you add to that the fact that Hasbro has been teasing us with, or one might say preparing us for, an eventual raise in prices sometime in the near future for a few years now. How will that make you feel then?

I think I'll always have the fascination with TF's. I've had it too long for it to just disappear. But I think eventually the call will be out of my hands if the trends keep up. I simply won't be able to afford it anymore.