Jay Cochran - August 15, 2015
Shown below is a new Star Wars: The Force Awakens poster that was handed out to folks at this weekends D23 Expo live-action Movie panel. 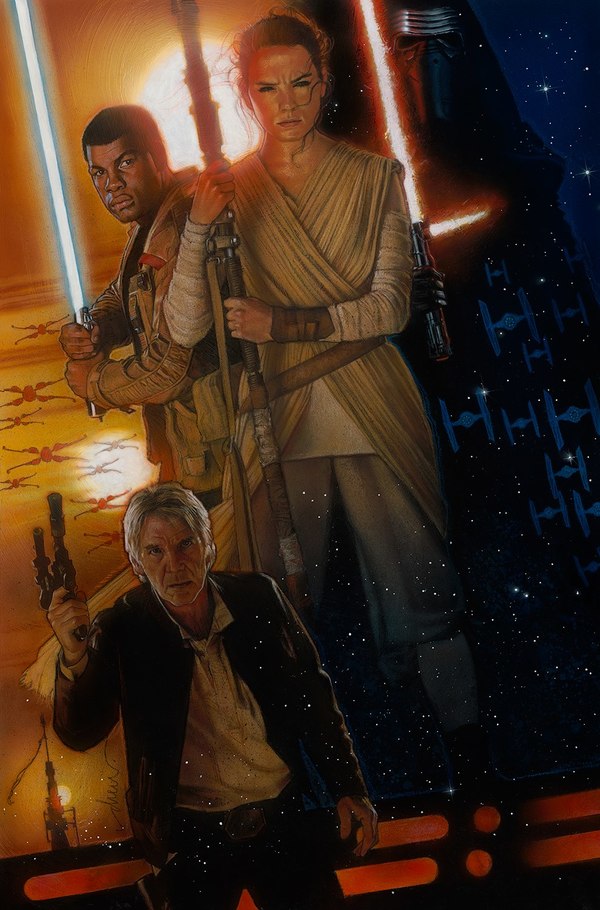 Alan Horn took the stage again to present the Lucasfilm slate and timeline to the D23 EXPO fans. Horn told the audience that there were only 124 days to the release of Episode VII, “Star Wars: The Force Awakens,” on December 18, 2015 and added that there have been record-breaking trailer views and fantastic fan response. Touching on “Star Wars: Episode VIII,” Horn reminded the audience that Rian Johnson will be directing the film slated for release on May 26, 2017. Then in a surprise announcement, Horn informed everyone that Colin Trevorrow (“Jurassic World”) has signed on to direct “Star Wars: Episode IX,” which is scheduled for release in 2019.

Moving on to the new Star Wars stories series, Horn touched on the “Untitled Han Solo” stand-alone film, slated for release on May 25, 2018 by reminding everyone that it will be directed by Christopher Miller & Phil Lord, with Lawrence Kasdan and his son Jon Kasdan writing the screenplay.

· Horn then took the audience by surprise, announcing the cast for “Rogue One,” the first of the standalone Star Wars stories to hit the big screen, which has commenced principal photography. Gareth Edwards (“Godzilla,” “Monsters”) is directing “Rogue One,” which tells the story of resistance fighters who have united to steal plans to the dreaded Death Star.

The filmmakers have assembled a stellar cast, including Felicity Jones, nominated for an Academy Award® for her leading role in “The Theory of Everything”; Diego Luna, who was featured in 2008’s Oscar®-winning “Milk” and the critically acclaimed “Killing Them Softly”; Ben Mendelsohn, recently nominated for an Emmy for his leading role in “Bloodline” and co-starring in the upcoming “Mississippi Grind”; Donnie Yen, Hong Kong action star and martial artist who starred in “Ip Man” and “Blade II”; Jiang Wen, who co-wrote, produced , directed and starred in the award-winning “Let the Bullets Fly” and “Devils on the Doorstep”; Forest Whitaker, recently featured in the critically-acclaimed Lee Daniels’ “The Butler” and winner of an Academy Award® for his leading role in 2006’s “The Last King of Scotland; Mads Mikkelsen, who starred in “The Hunt” and was the memorable villain from 2006’s “Casino Royale”; Alan Tudyk, who plays a performance-capture character in “Rogue One,” stars in the soon-to-be-released “Con Man” series and “Trumbo,” which releases this November; and Riz Ahmed, who was recently featured in “Nightcrawler” and starred in the BAFTA-winning film “Four Lions.”

The film is produced by Kathleen Kennedy and is slated for a December 16, 2016 release.

· “Star Wars: The Force Awakens” ended the live-action presentation with a bang as J.J. Abrams introduced stars John Boyega, Daisy Ridley, Oscar Isaac and Lupita Nyong’o. The crowd cheered when John Boyega announced that everyone there would get a Drew Struzan D23 EXPO commemorative poster to take home. Then, in a bringing-down-the house surprise moment, Harrison Ford, who is reprising his role as Han Solo, joined Abrams on stage to wild applause.