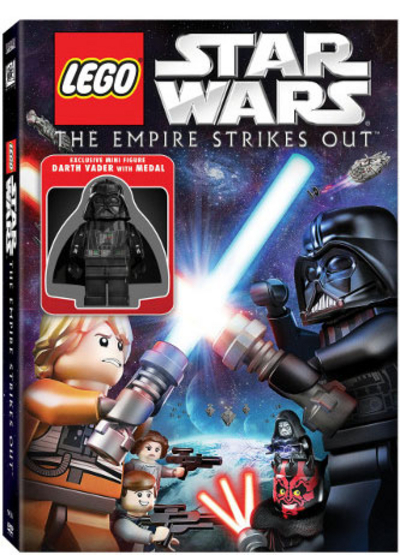 After a record breaking debut on Cartoon Network, The LEGO Group and Lucasfilm announced today that LEGO® Star Wars™: The Empire Strikes Out will release on DVD this coming March 26, 2013. The 22-minute original standalone special will bring the same tongue-and-cheek humor fans know and love in a brand new epic adventure featuring everyone’s favorite LEGO Star Wars characters. Distributed by Twentieth Century Fox Home Entertainment, the DVD will include an exclusive collectible Darth Vader LEGO minifigure and is available now for preorder at www.foxconnect.com/awesome.

SYNOPSIS:
Your favorite characters are back to save the galaxy in LEGO Star Wars: The Empire Strikes Out. The heroes of the Rebel Alliance including heroic Luke Skywalker, swaggering Han Solo and steadfast Princess Leia have no time to celebrate their victory over the Empire as a new Imperial threat arises. But as Jedi-in training Luke embarks on this next mission, he discovers that his celebrity status as a “Death-Star-Blower-Upper” can be a double-edged lightsaber when he’s constantly mobbed by crazed fans. So much for secret missions! Meanwhile, Darth Vader and Darth Maul are locked in a hilarious “Sith-ling” rivalry as they compete for the Emperor’s approval. It’s an action-packed comic adventure that’s out of this world!

I thought that came out already

saw it on cartoon network. it was cool but only like 22 minutes. is that long enough for a dvd release?