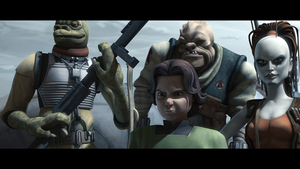 Coming off his appearance at Wondercon last week, we had a chance to sit down for a few minutes with actor Daniel Logan who played the young Boba Fett in Star Wars: Attack of the Clones and who will be reprising his role as the feared bounty hunter in a special 3-part season finale of the Clone Wars Animated Series. We talked about the role and what it’s like to take on such a well-known and well-liked character in the Star Wars Universe. Returning to Star Wars several years after his debut in Attack of the Clones, Logan characterized the experience as “awesome”. He especially enjoys his connection with the characters, the behind-the-scenes people involved in bringing those characters to life, and the fans who support Star Wars.

Growing up, Logan knew of Star Wars but had never watched the movies. When first involved with the franchise, Logan watched the original trilogy at the studio at George Lucas’ behest. He quickly came to appreciate the films and considers himself a lifetime fan – joking that he plays Episode II on his TV all day, every day. Asked about why he thinks Boba Fett has had such enduring popularity, Logan points to the mystery surrounding the character. He says Lucas Entertainment provided just enough detail about Boba Fett through movies, comic books, and TV to whet the appetite for more. As a kid, he was disappointed that he was not able to wear Boba Fett’s jetpack during the live action movie.

Logan sees parallels in the challenges of live action and voice acting for an animated series in George Lucas’ world. Logan’s work on Star Wars: Attack of the Clones was primarily done with blue screens and called on the imagination he honed during his childhood. Voice acting for the Clone Wars Animated Series was similar in the way Logan tapped into his imagination. He credits director Dave Filoni with easing him into the experience and ensuring fun was part of each day. Asked if he prefers live action or voice acting, Logan confessed that he just loves to act – on stage, through a recording mike, or in class. 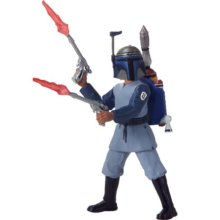 So we had to ask – what can fans expect to see in the upcoming three-part season finale for Clone Wars. According to Logan, Boba is back and here to stay. Without the guidance of his father, Jango Fett, Boba gets involved with a tough crowd. His bottom line – he’s alone in the universe and out for revenge. Logan is taking his assignments day by day but expressed an interest in continuing the part if approached. This seems likely as our Bothan spies have reported that Clone Wars has been picked up by Cartoon Network for a third season. Logan also expressed interest in the recently announced new Star Wars Animated Series.

Like many other actors in the Star Wars galaxy, Logan has come face-to-face with himself of toy shelves in the form of his Boba Fett action figure (and seems likely will have a second figure based on Clone Wars). He describes the feeling as that little flip in your stomach on a really good roller-coaster. Just having his face associated with a character like Boba Fett is a bit awe-inspiring and an experience Logan is honored to be part of. Between Star Wars jobs, Logan is concentrating on honing his craft with acting and speech classes. Even with his busy schedule “putting more tools in [his] toolbox,” Logan hopes to spend time at Celebration V this August.

The 3-part season finale of Star Wars: The Clone Wars featuring Daniel Logan as the voice of Boba Fett premieres on Cartoon Network April 23 and then again on April 30. If you haven't already, be sure to check out below the teaser trailer for this episode that debuted at Wondercon.