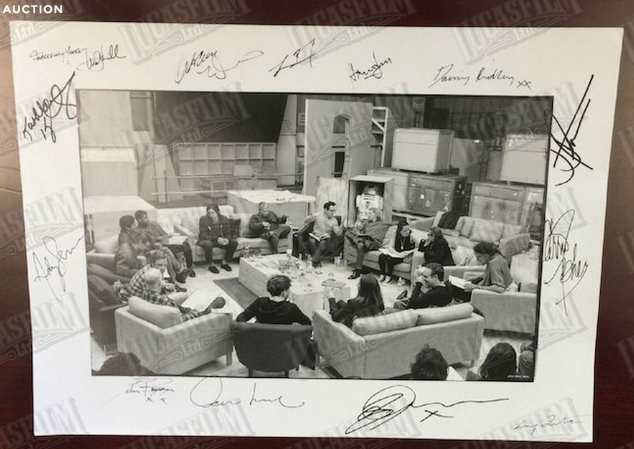 Last April, when the cast of The Force Awakens was revealed, each member of the cast was given a copy of the photo of the table read. Cast member Adam Driver asked members of the cast to sign his copy, which is now being auctioned to benefit 'Arts in the Armed Forces', "which aims to engage veterans in the power and social service of the performing arts."

Star Wars: The Force Awakens Cast Photo Signed By Adam Driver, J.J. Abrams, Harrison Ford, Mark Hamill, and More (Note: you have to log in to view the auction)

The winner of the auction will have the option to have the remaining pictured cast members sign the photo at a later date:
*Bryan Burk
◦Anthony Daniels
◦Domhnall Gleeson
◦Peter Mayhew

they will also be treated to a private tour of the Lucasfilm and ILM campus in the Presidio of San Francisco.