Jay Cochran - July 17, 2009
Hasbro, Inc. returns to San Diego Comic-Con in 2009 with its iconic properties that have entertained fans of all ages for decades. Hasbro’s expansive portfolio of brands that have become part of the global pop-culture such as G.I. JOE, TRANSFORMERS, MY LITTLE PONY, and its licensed toy lines based on characters from the MARVEL and STAR WARS universes, will be on display in the Hasbro booth (#3213).

Following are the highlights of Hasbro’s Comic-Con showcase:

In 1964, the introduction of Hasbro’s G.I. JOE line created the “action figure” category. Since then, the G.I. JOE property has evolved, delivering a unique brand of action for each new generation. This summer, fans of all ages will see the G.I. JOE franchise taken to the next level with the major motion picture release of G.I. JOE: THE RISE OF COBRA, on August 7, from Paramount Pictures and Spyglass Entertainment, in association with Hasbro. The film focuses on an elite G.I. JOE team that uses the latest in next-generation spy and military equipment to fight the corrupt arms dealer DESTRO and growing threat of the mysterious COBRA organization. Hasbro’s 2009 product line allows fans of all ages to capture the excitement of the movie and recreate it in their own homes. The line features dozens of action figures, vehicles and playsets that long time G.I. JOE fans and a new generation of kids will want to add to their collection. In addition to the exciting and expansive new toy line, Hasbro will have several props from G.I. JOE: THE RISE OF COBRA on display in its booth including the SNAKE EYES and STORM SHADOW movie costumes.

It’s been an exciting year in the Marvel Universe with Marvel and Fox’s blockbuster movie, X-Men Origins: Wolverine as well as two new animated television series on Nickelodeon’s Nicktoons network – Wolverine and the X-Men and Iron Man: Armored Adventures. As the master toy licensee for Marvel’s incredible library of Super Hero properties, Hasbro is thrilled to display its highly anticipated toys and action figures for 2009 from its SPIDER-MAN, IRON MAN, WOLVERINE, MARVEL UNIVERSE and SUPER HERO SQUAD toy lines.

Hasbro’s MY LITTLE PONY brand once again returns to Comic-Con. In 2009, the MY LITTLE PONY brand is bringing a whole new look to its core cast, and fans everywhere will be able to enjoy them through a variety of games, publishing and entertainment. Speaking of entertainment, look for the new MY LITTLE PONY DVD, Twinkle Wish Adventure, scheduled for release October 13, 2009. Collector fans will not be disappointed this year and should stop by the booth to check out a display of 18” Comic-Con and Junko Mizuno ponies. A 4.5" edition of the Comic-Con pony will be available for sale beginning at Comic-Con and later for sale at HasbroToyShop.com. And, later this year, look for a 4.5" version of the Junko Mizuno pony available for sale at HasbroToyShop.com and at specialty retailers. Bonnie Zacherle, one of the original designers of the MY LITTLE PONY brand, will be at the Hasbro booth on Saturday, July 25 from 10:00 a.m. – 12:00 p.m. for an autograph and sketching session.

This summer, the colossal battle between the AUTOBOTS and the DECEPTICONS continued when “ROBOTS IN DISGUISE” once again invaded movie theaters around the world. TRANSFORMERS: REVENGE OF THE FALLEN from DreamWorks Pictures and Paramount Pictures, in association with Hasbro, continues the story from the 2007 worldwide blockbuster film that finds two warring factions of robots colliding in a major battle on planet Earth. In 2009, Hasbro continues the legacy with its new line of movie-based TRANSFORMERS toys that capture the action and excitement of the new film. An extensive showing of the new line of action figures, vehicles and roleplay items will be on display in the Hasbro booth.

Of course, what would San Diego Comic-Con be without several Hasbro exclusives? Available at the HasbroToyShop booth (#3329) will be the following:

Just in time for the release of G.I. Joe: The Rise of Cobra, due out on August 7th from Paramount Pictures and Spyglass Entertainment, in association with Hasbro, Hasbro introduces the first and only 12” BARONESS figure. The figure, in the likeness of BARONESS actress Sienna Miller as seen in the upcoming movie, features a soft goods trench coat and body suit as well as multiple signature weapons. The figure comes with an R. Black designed “COBRA recruiting poster” featuring BARONESS and features the “COBRA Office of Propaganda” seal of approval. The figure and poster come packaged together in a premium faux-leather box with embossed foil.

Covertly retrieved from a G.I. JOE evidence storage facility and released by the “COBRA Office of Propaganda,” this special edition 3 ľ” DESTRO 2-Pack represents James “Destro” McCullen’s personal bound tome containing the history of the Clan McCullen. Opens to reveal two fully articulated 3 ľ” carded McCullen figures with masks and accessories as seen in G.I. Joe: The Rise of Cobra, as well as a timeline highlighting the weapons supplying escapades of each McCullen generation throughout history.

Hasbro and friends of Gianni Lopergolo, a Hasbro employee living with Amyotrophic Lateral Sclerosis (ALS), also known as Lou Gehrig’s Disease, are introducing Insight:, a book of Mr. Lopergolo’s stunning and unique photography of Hasbro’s G.I. JOE, MARVEL and STAR WARS action figures. Spanning Mr. Lopergolo’s eight year career at Hasbro, the book features over 90 images of action figures posed and photographed at Hasbro’s internal creative studios. Using simple props and a creative use of lighting and imagination, Mr. Lopergolo revolutionized how the toy maker photographs its beloved action figures. The high quality book features over 120 pages of images, some previously unreleased, for readers to explore and appreciate and will be available for immediate purchase at the HasbroToyShop booth at San Diego Comic-Con July 23-26 as well as online at www.HasbroToyShop.com. Sales of the book will benefit ALS Foundations and the family of the innovative artist. To learn more about Insight: visit www.hasbro.com/giannisbook.

This little kitty pet is showing her super hero side! Featuring comics-themed graphics plus painted-on shiny boots and a mask, this adorable friend is perfect for adding a little extra “pow!” to your LITTLEST PET SHOP pets collection. This HasbroToyShop Exclusive launches at San Diego Comic-Con 2009 and is also available at HasbroToyShop.com. Get this exclusive figure while supplies last.

This Righteous Rebel with claws coming to you in exclusive foil packaging for Comic-Con. “Made from 100% Recycled AWESOME™!”, this X-Man sports a lovable sneer and retractable claws on both hands.

The Invaders are here! Celebrating 70 years of rich comic history, this exclusive box set pays tribute to a classic super team and four timeless Marvel characters. Featuring all original artwork by none other than Joe Quesada, each set includes four separate single carded figures: Captain America, the Original Human Torch, Prince Namor and the Red Skull. Sealed with a commemorative 70th anniversary magnet and stuffed with 4 “top secret” War Dept. files, you won’t want to miss this one!

The popular special edition MY LITTLE PONY figure available at San Diego Comic-Con will have fans “split” in 2009. One side of the iconic MY LITTLE PONY figure features a super hero ready to “save the day” while her other half features a super villain alter ego ready to “rule the world.” This comic book inspired design comes in a very unique package intended to let both sides of this pony’s personality shine through two clear “peek-a-boo” MY LITTLE PONY silhouettes on either side of the colorful box. This HasbroToyShop Exclusive launches at San Diego Comic-Con 2009 and is also available at HasbroToyShop.com! Get this exclusive figure while supplies last.

It was LUKE SKYWALKER’S boyhood dream to one day pilot an X-WING STARFIGHTER for the REBEL ALLIANCE – and when that day came, he was all smiles. Hasbro is offering a 3-3/4-inch “SMILING LUKE” action figure exclusively at Comic-Con 2009! Includes ladder and pilot helmet.

One of the most recognizable characters from the TRANSFORMERS brand lore, SOUNDWAVE is making a retro-comeback for San Diego Comic-Con in honor of the brand’s 25th Anniversary. Hasbro is re-releasing the original 1984 edition of the figure that will include four of the SOUNDWAVE character’s cassettes, two of which have not been released since the 80’s. The cassette characters include BUZZSAW, LASERBEAK, RATBAT and RAVAGE. The four figures fully convert between robot and cassette mode and fit into SOUNDWAVE when in cassette mode.

In honor of the 25th Anniversary of the TRANSFORMERS brand, OPTIMUS PRIME, leader of the AUTOBOTS and one of the most well known characters from the TRANSFORMERS brand lore, is getting the popular MIGHTY MUGGS line treatment for San Diego Comic-Con. This special edition OPTIMUS PRIME MIGHTY MUGG figure, which comes with a detachable cannon, shines with a metallic finish and comes in commemorative foil packaging.
Image 1 of 24 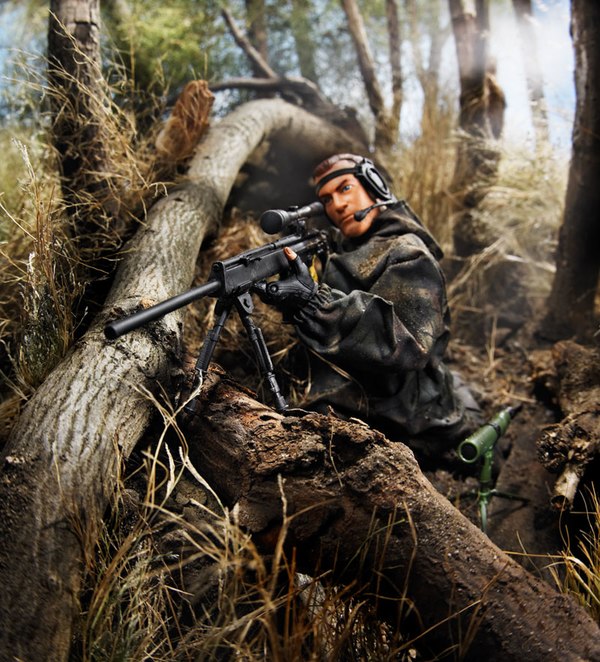 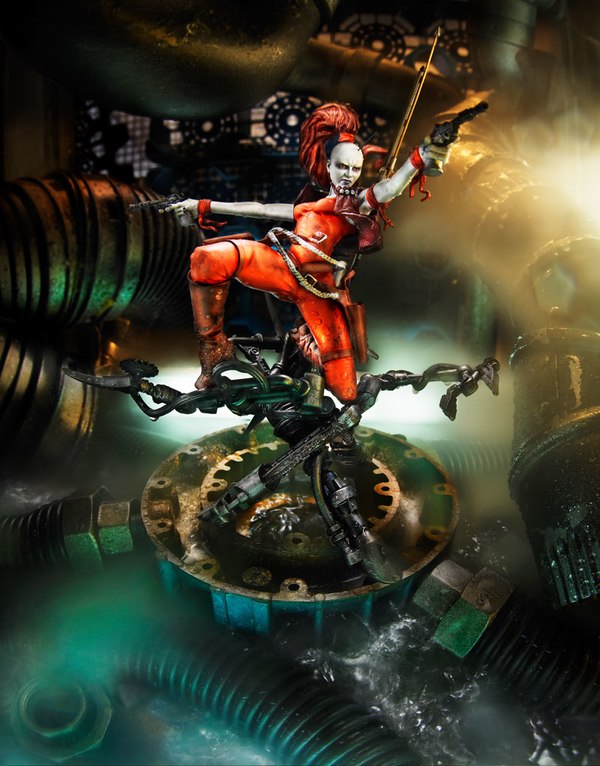 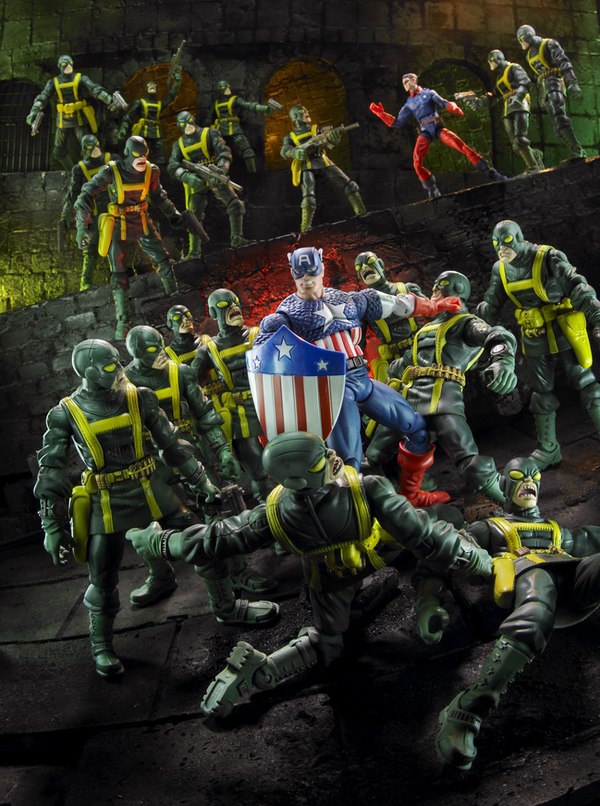 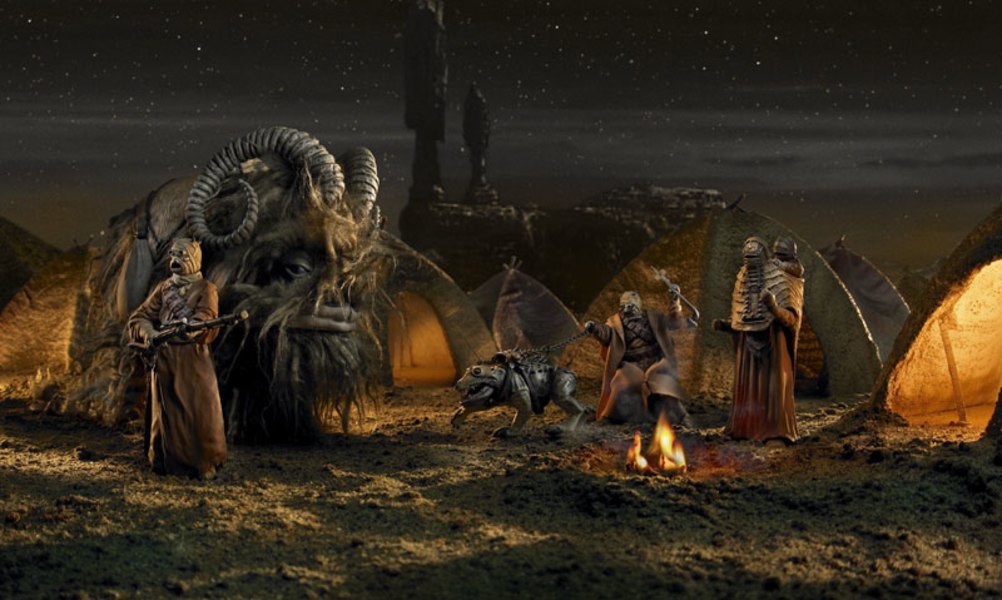 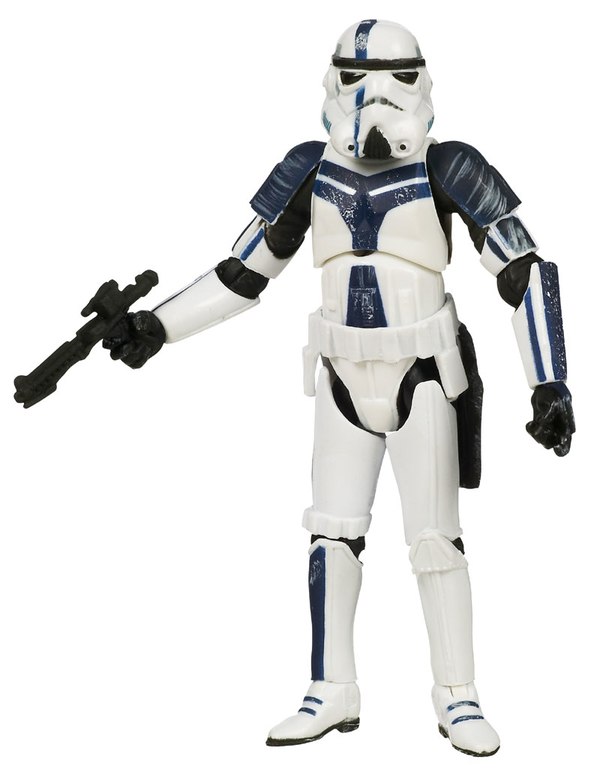 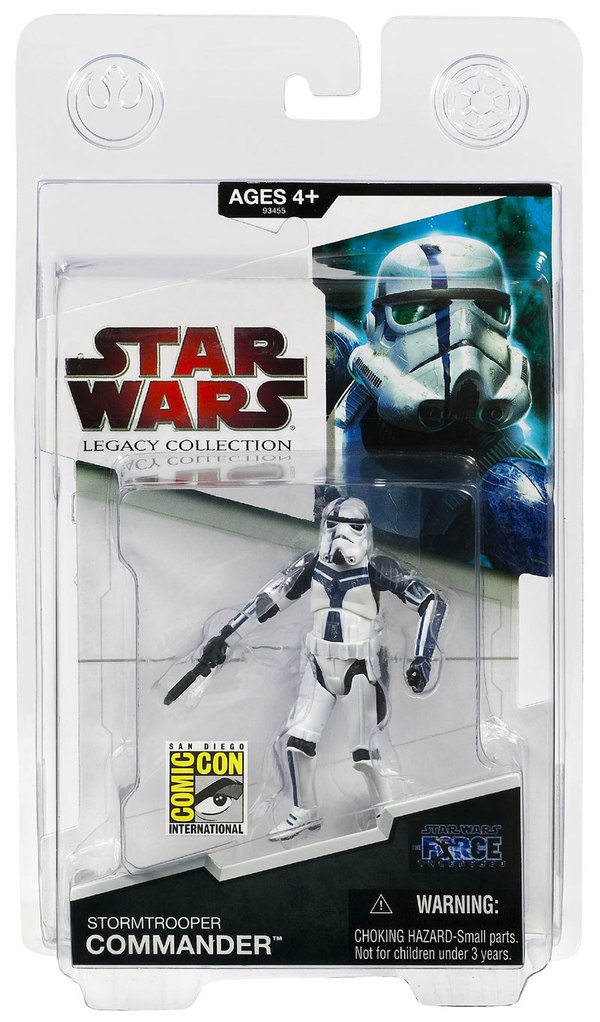 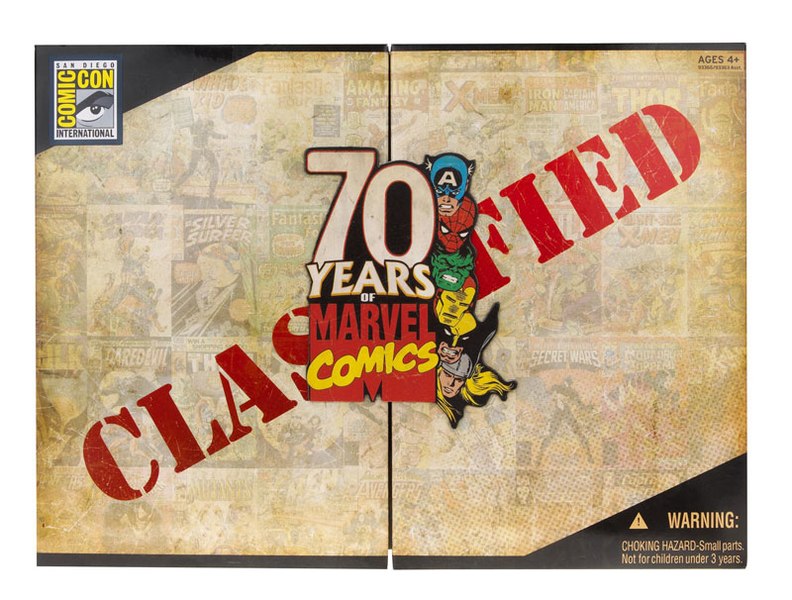 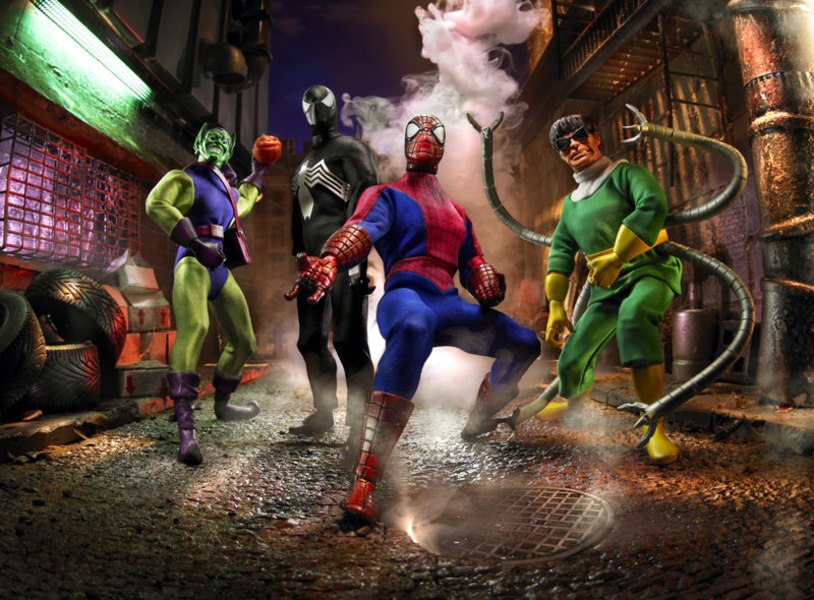 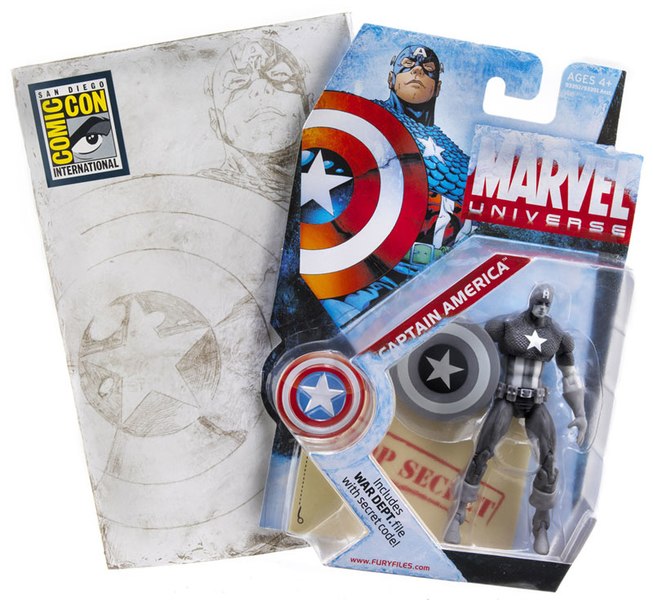 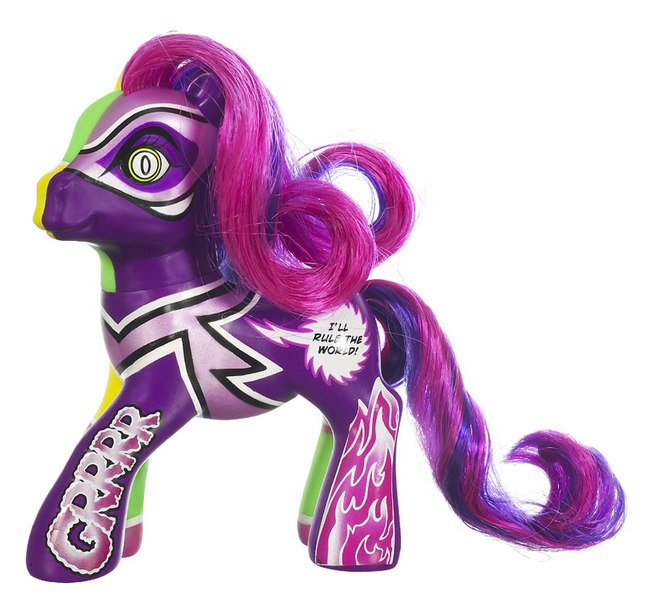 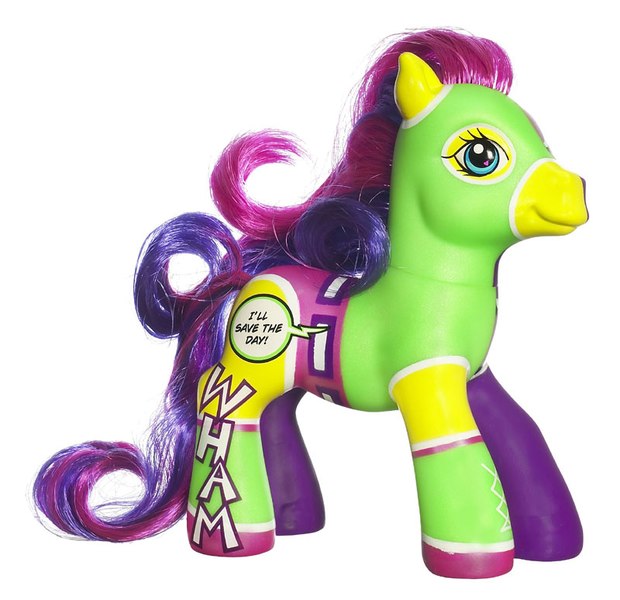 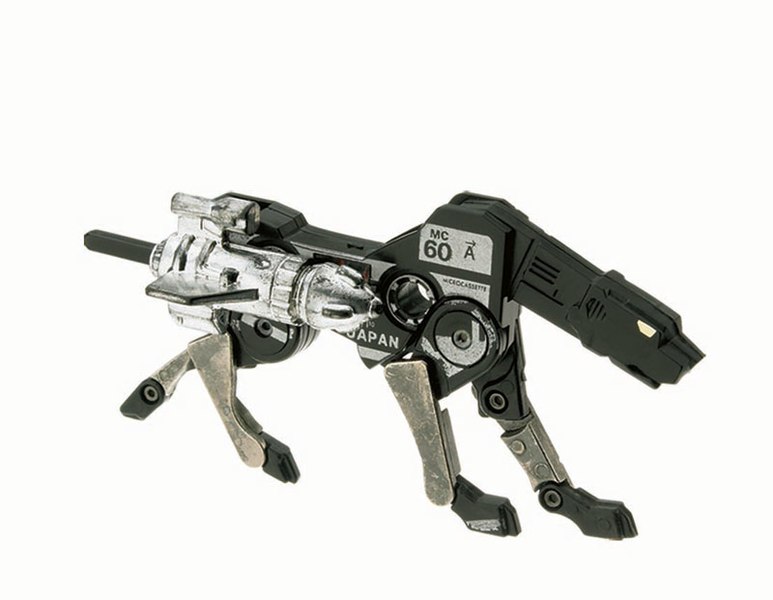 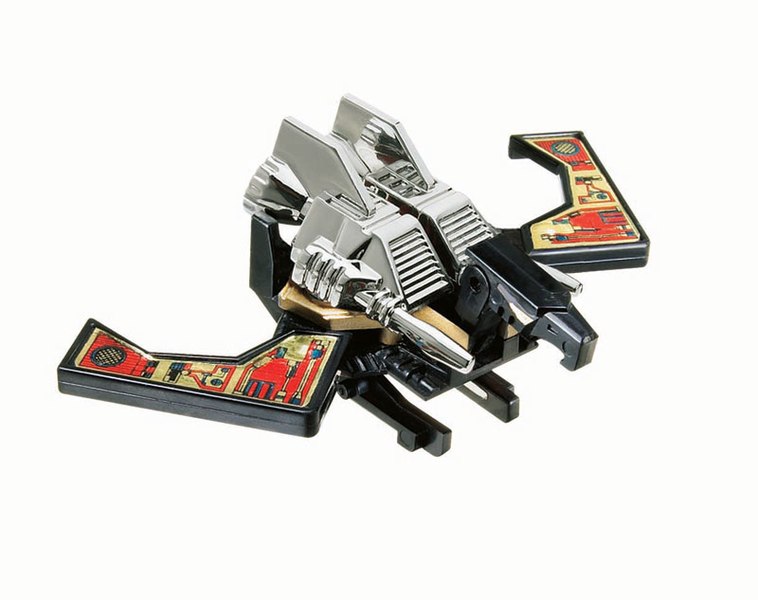 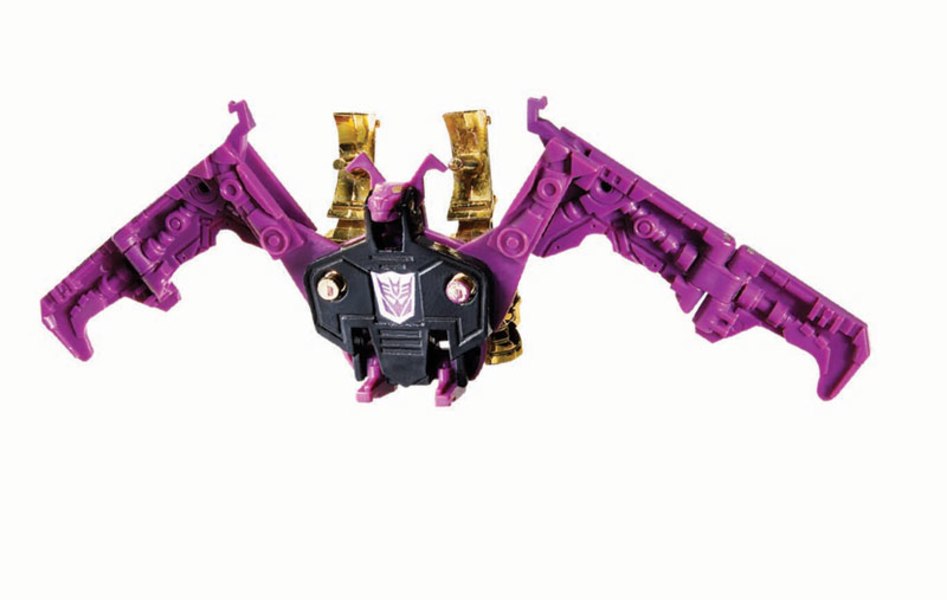 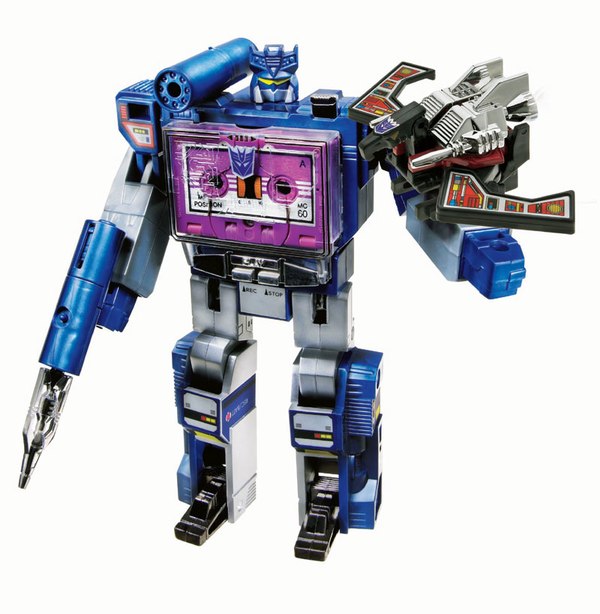 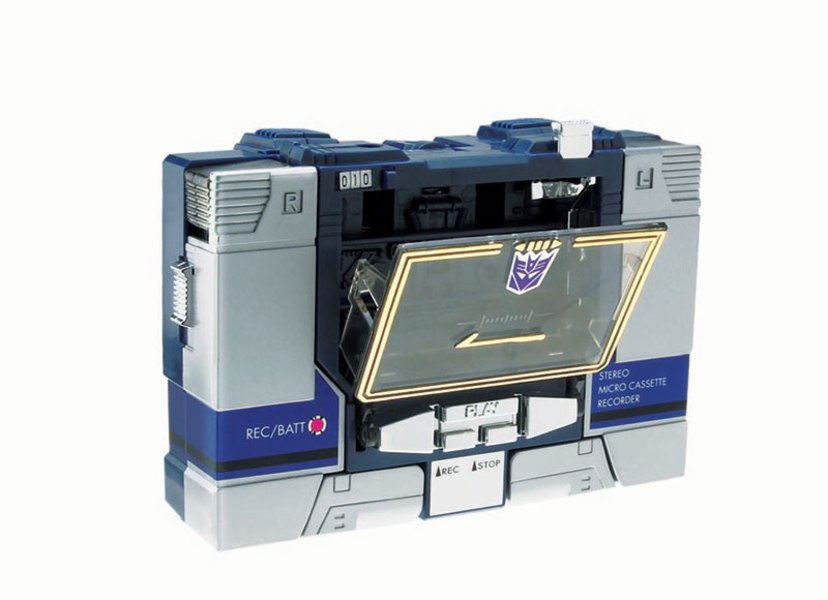 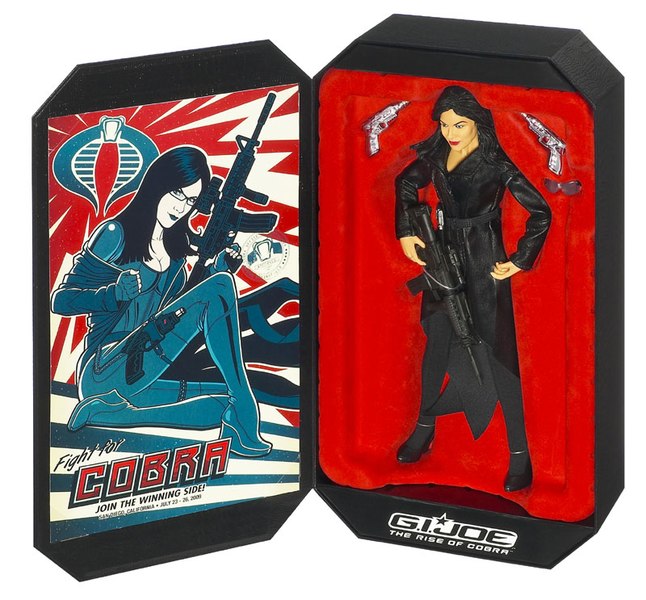 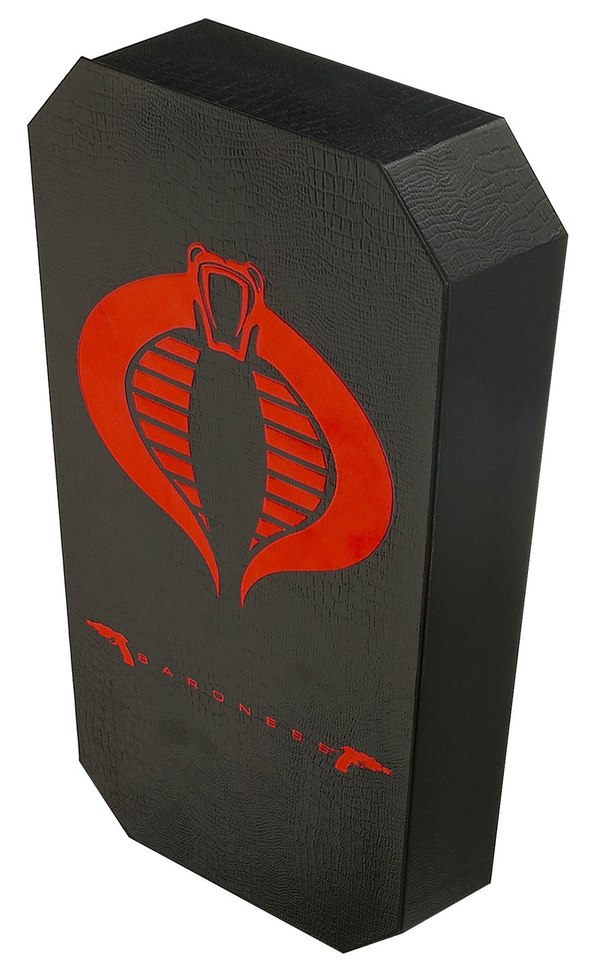 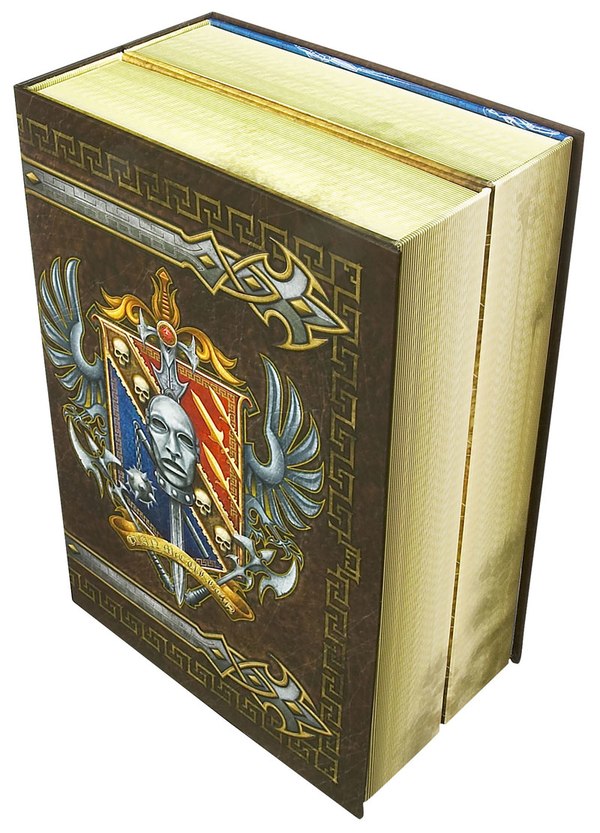 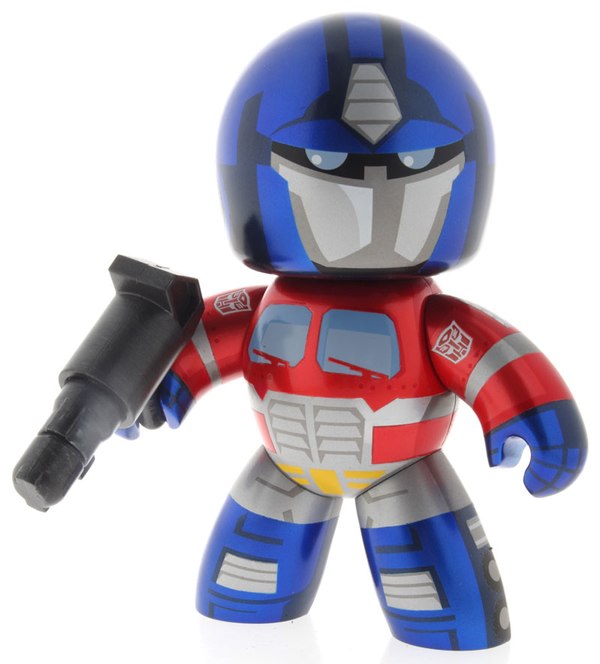 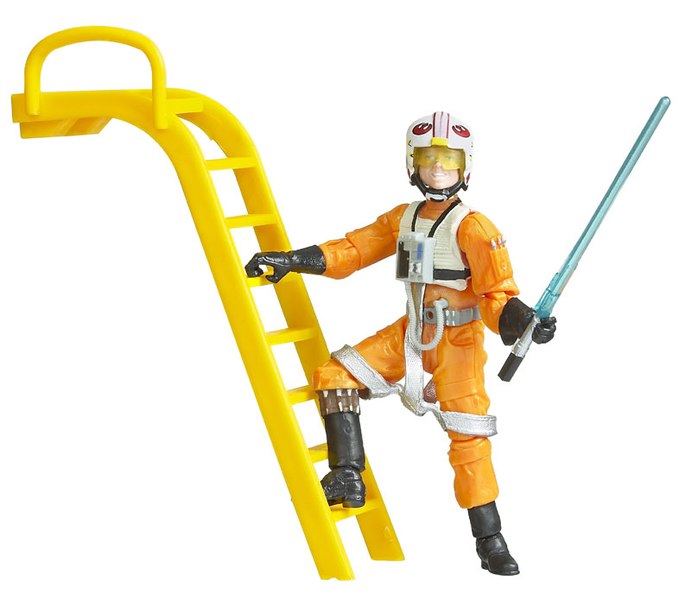 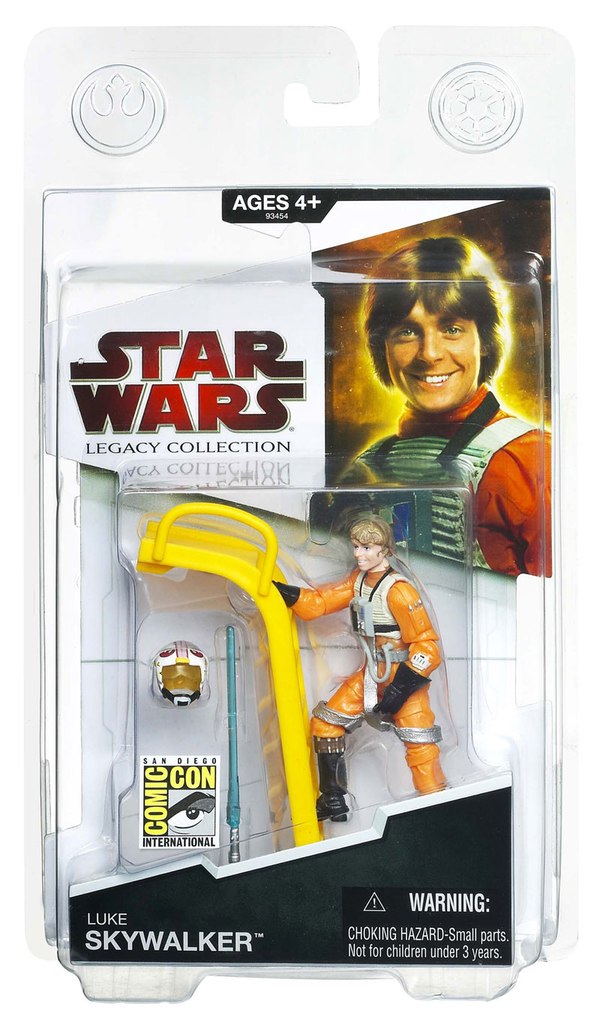 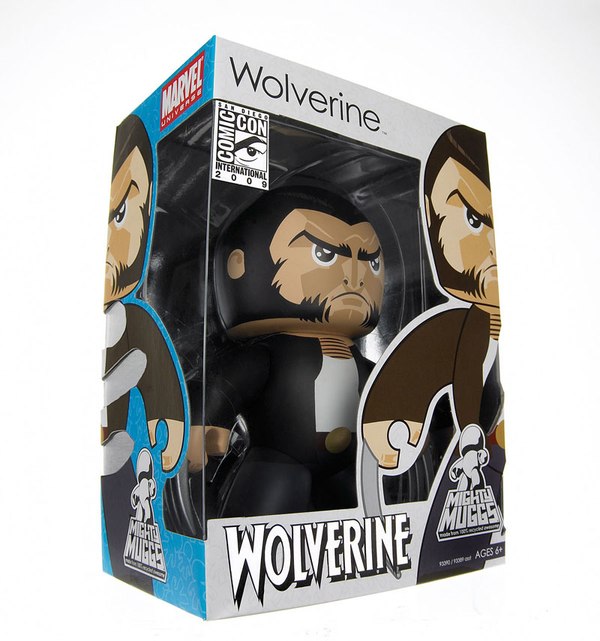 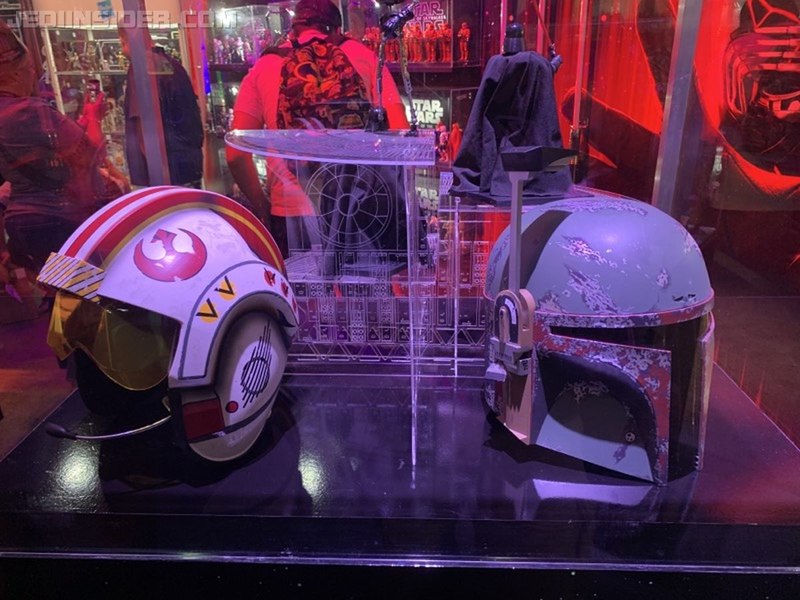