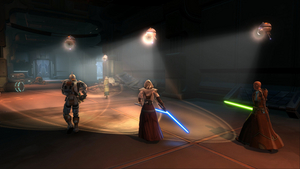 “Prior to release, our main priority for Star Wars: The Old Republic was to deliver a high quality game and service, right from day one,” said Dr. Greg Zeschuk, General Manager of the BioWare Label’s MMO Business Unit and Co-Founder of BioWare. “Now that we’ve achieved that, we have shifted our focus to adding more content to the game and improving and refining the experience for our fans. Legacy is our biggest update yet and a great example of the kind of content players can expect for the months and years ahead.”

Game Update 1.2 presents the next evolution of the Legacy system. Players can now link their different characters together into a single family tree, giving them the power to unlock and share special Legacy-only abilities. Players can further customize new characters by unlocking different species from any class in their family tree. The Legacy system also provides fun new convenience items for player ships, including an on-board mailbox and Galactic Trade Network terminal. Companion Character affection and moral alignment will also benefit from Legacy bonuses, giving players even more control over their crew mates. .

Game Update 1.2: New Content:
· Flashpoint: Lost Island continues the Kaon Under Siege Flashpoint from Game Update 1.1 – Rise of the Rakghouls. Players must survive a menacing island of mystery on Ord Mantell as they hunt for clues to the Rakghoul virus outbreak that ravaged the Tion Hegemony. But the answers to this riddle may prove fatal!

· Operation: Explosive Conflict sends groups of eight or sixteen Imperial or Republic players to a new zone on the planet of Denova, where traitors and mercenaries are selling the rare explosive mineral baradium to the highest bidder. Players will battle through hordes of Droids, mercenaries and deadly creatures all fighting for control of the planet and its valuable resources.

· Warzone: Novare Coast pits two teams in an epic battle to control multiple mortar locations and use them to bombard vulnerable enemy bases. Like the Huttball Warzone, Novare Coast can be played Republic vs. Empire or with players of the same faction fighting each other in a thrilling contest of wills to determine each side’s greatest champions.

These announcements were made today during the first day of the inaugural Star Wars: The Old Republic Guild Summit. Over 200 enthusiastic guild members from around the world have come to BioWare Austin for this two-day event to discuss the state of the game and its future direction with the development team. This event is being livestreamed for anyone who wishes to participate remotely.

Star Wars: The Old Republic is set thousands of years before the classic Star Wars movies, with the Galactic Republic and Sith Empire locked in the middle of an epic, galactic war. By choosing one of eight iconic Star Wars characters, including the Jedi Knight, Jedi Consular, Smuggler, Trooper, Sith Warrior, Sith Inquisitor, Bounty Hunter and Imperial Agent, players become the hero or villain of their own personal Star Wars saga. Players team up with friends online, fighting in heroic battles reminiscent of the films, immersing themselves in a galaxy full of vibrant characters and planets, while experiencing visceral Star Wars combat.

*TRIAL OFFER EXPIRES 14-DAYS FROM THE DATE SENT TO INTENDED RECIPIENT. ONLY VALID FOR NEW STAR WARS™: THE OLD REPUBLIC™ (“PRODUCT”) ACCOUNTS THAT ARE NOT ALREADY ENROLLED IN THE FRIENDS OF STAR WARS: THE OLD REPUBLIC TRIAL. ONLY NEW USERS ARE ELIGIBLE TO PARTICIPATE. SEVEN (7)-DAY TRIAL PERIOD ACTIVATED FROM TIME AND DATE OF TRIAL INSTALLATION. ONCE ACTIVATED, USER WILL BE ABLE TO PLAY PRODUCT FOR UP TO SEVEN (7) CONSECUTIVE DAYS. UNUSED TRIAL TIME IS FORFEITED UPON REDEMPTION OF PRODUCT REGISTRATION CODE OR PURCHASE OF PRODUCT SUBSCRIPTION OR REDEMPTION OF A GAME TIME CARD CODE. VALID ONLY IN TERRITORIES WHERE STAR WARS: THE OLD REPUBLIC IS DISTRIBUTED. SEE WWW.SWTOR.COM/INFO/FAQ/GAME#Q209655. OFFER MAY NOT BE SUBSTITUTED, EXCHANGED, SOLD OR REDEEMED FOR CASH OR OTHER GOODS OR SERVICES. CANNOT BE COMBINED WITH ANY OTHER OFFER, GIFT CARD, REBATE OR OTHER DISCOUNT COUPONS. LIMIT ONE OFFER PER PERSON. RETAILERS, DISTRIBUTORS AND EMPLOYEES OF ELECTRONIC ARTS INC. AND THEIR AGENCIES/AFFILIATES ARE NOT ELIGIBLE. VOID WHERE PROHIBITED, TAXED OR RESTRICTED BY LAW.
ACCEPTANCE OF END USER ACCESS AND LICENSE AGREEMENT (“EUALA”), PERSISTENT INTERNET CONNECTION, AND ACCOUNT REGISTRATION REQUIRED TO PLAY. MUST BE 13+ TO REGISTER. SWTOR ONLINE SERVICE MAY BE DISCONTINUED AFTER 30 DAYS NOTICE POSTED ON WWW.SWTOR.COM. SEE EUALA FOR DETAILS. AGREEMENT TO SHARE ACCOUNT INFORMATION WITH LUCASFILM ENTERTAINMENT COMPANY LTD. (“LUCASFILM”) IS REQUIRED TO ACCESS GAMEPLAY. GAME INTENDED FOR PLAY IN NORTH AMERICA, EUROPE, AND CERTAIN OTHER TERRITORIES. SEE WWW.SWTOR.COM/INFO/FAQ/GAME#Q209655 PRIVACY POLICY AND TERMS OF SERVICE AVAILABLE AT WWW.SWTOR.COM. TERMS AND CONDITIONS TO PLAY THE GAME APPLY AT ALL TIMES. THE FIRST 30 DAYS OF SUBSCRIPTION FEES ARE INCLUDED IN THE PURCHASE OF THE PRODUCT. SUBSCRIPTIONS MAY BE CANCELLED AT ANY TIME. SEE WWW.SWTOR.COMFOR DETAILS.

LucasArts, the LucasArts logo, STAR WARS and related properties are trademarks in the United States and/or in other countries of Lucasfilm Ltd. and/or its affiliates. © 2012 Lucasfilm Entertainment Company Ltd. or Lucasfilm Ltd. 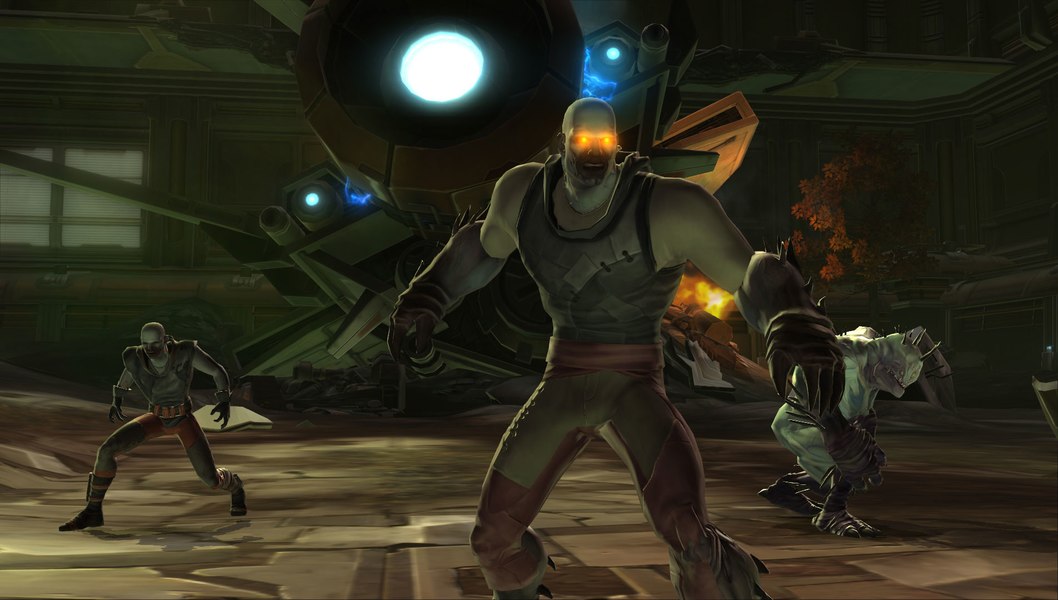 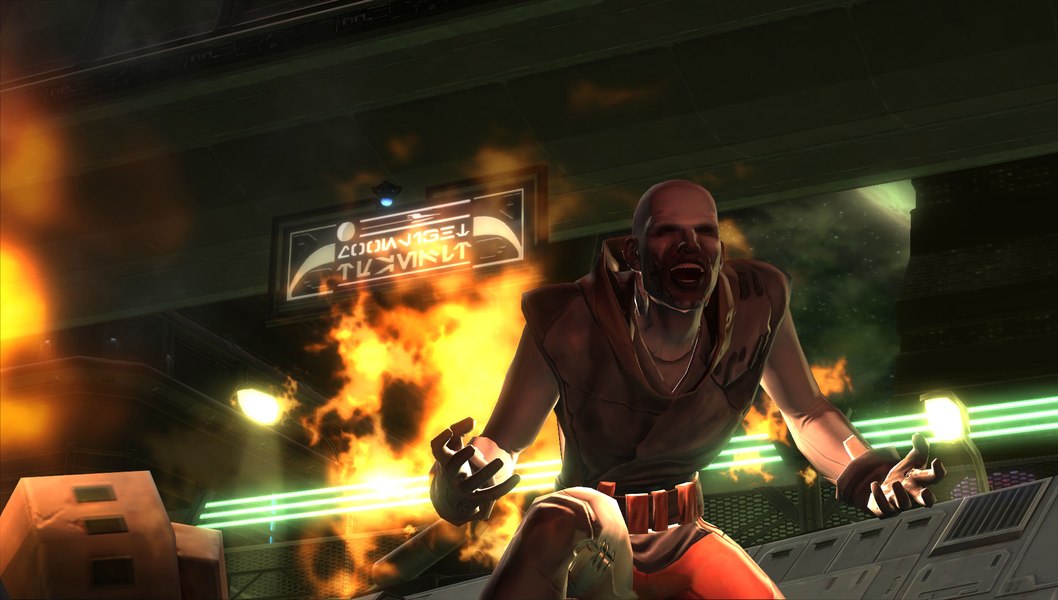 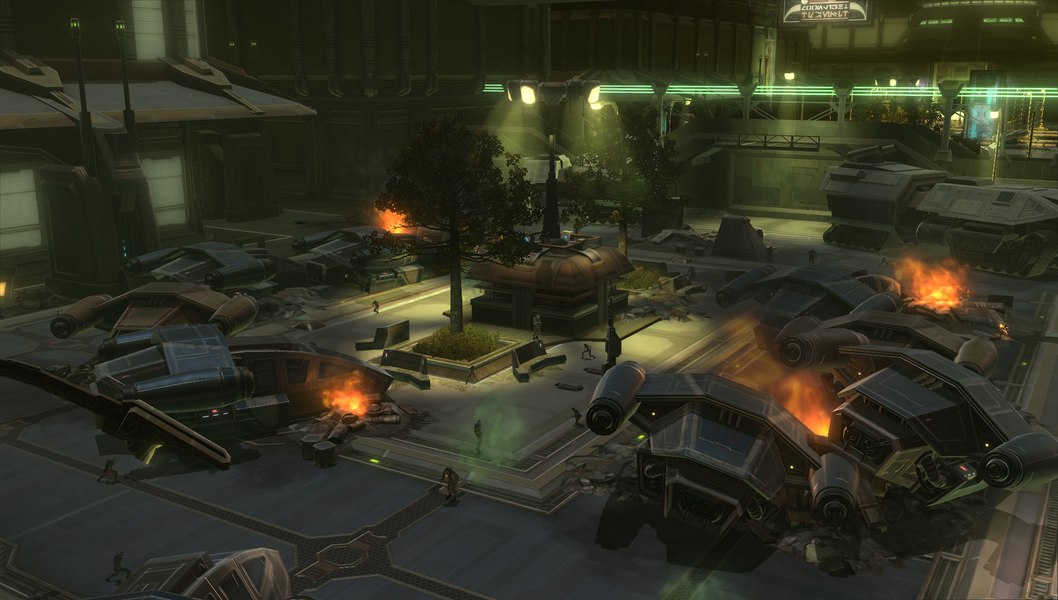 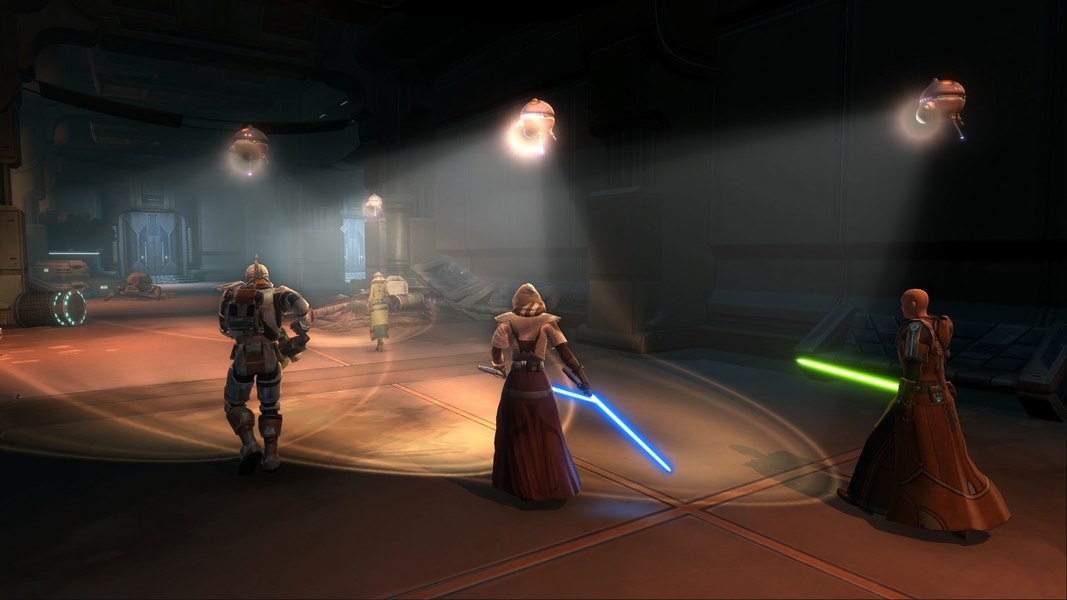 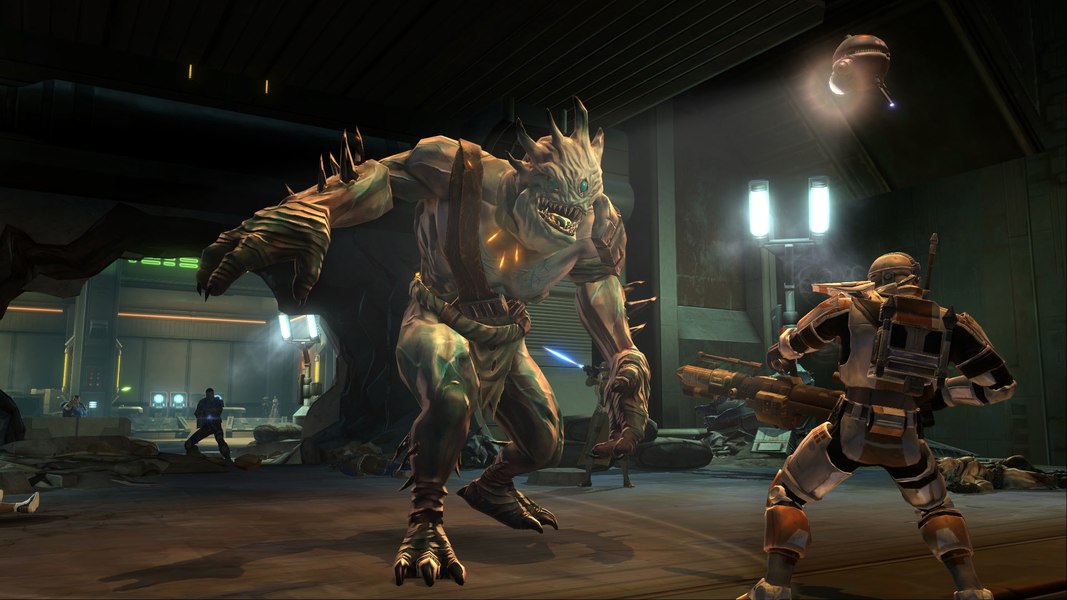