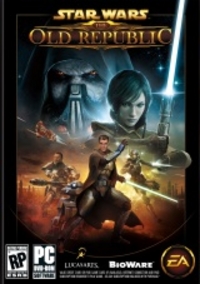 Today during their keynote address at the Eurogamer Expo, Dr. Ray Muzyka and Dr. Greg Zeschuk, co-founders of BioWare, a label of Electronic Arts announced that Star Wars TM: The Old Republic will launch in North America on December 20, 2011 and in Europe on December 22, 2011. Set thousands of years before the rise of Darth Vader, Star Wars: The Old Republic is a massively multiplayer online game challenging players with epic quests, featuring dynamic combat across iconic worlds in the Star WarsTM galaxy such as Tatooine, Alderaan, Hoth and more. Each of the game’s eight primary classes will enjoy their own unique trilogy of storylines, all of which are fully voiced with a sweeping musical score. Anticipation for the award-winning MMO is at an all-time high as Star Wars: The Old Republic has broken EA pre-order records and won over 95 industry awards and accolades from game critics worldwide.

“In 1977, Lucasfilm created magic with the release of Star Wars. Our goal is to capture some of that magic when we go live with Star Wars: The Old Republic on December 20,” said Dr. Ray Muzyka, Co-Founder, BioWare and General Manager, BioWare Label. “This is an incredible moment for everyone at BioWare and our partners at Lucas Arts who have dedicated so much of their lives to building this extraordinary game.”

Added Dr. Greg Zeschuk, Co-Founder, BioWare and General Manager of the MMO Business Unit of BioWare, “We appreciate the patience of the millions of fans who have been waiting for the game’s release. When we launch this groundbreaking MMO with world class storytelling this holiday season, we hope you will agree that it was worth the wait.”

Star Wars: The Old Republic is available for pre-order now at participating retailers* while supplies last. All players who pre-order will receive a redemption code that will unlock Early Game Access**, granting them access to the game before December 20, 2011 in North America and before December 22, 2011 in Europe. Pre-order quantities are limited and Early Game Access will only be available to those who pre-order the game and redeem their code before the game’s official release. Included with the purchase of every copy of Star Wars: The Old Republic is 30 days of access to the game, after which players can continue to play through subscribing*** at either $14.99 per month, $41.97 for 3 months ($13.99 per month), or $77.94 for six months ($12.99 per month).

Star Wars: The Old Republic has been lauded for breaking new ground in the genre by building on traditional MMO gameplay pillars of combat, exploration, character customization and progression, and adding a powerful fourth dimension to the experience – story with personal choice and consequence. The Old Republic is set thousands of years before the rise of Darth Vader, when the Star Wars galaxy is in the midst of a cold war. Players will be asked to join forces with either the Galactic Republic or Sith Empire and choose one of eight iconic Star Wars characters: Jedi Knight, Jedi Consular, Smuggler, Trooper, Bounty Hunter, Imperial Agent, Sith Inquisitor and Sith Warrior. Every player’s story will unfold based on meaningful choices made throughout the game, enabling them to become the hero of their own personal Star Wars saga. Along their journey, players will encounter companion characters with whom they can build and break meaningful relationships as they fight by their side. Players will explore a vibrant galaxy, engage in heroic battles, and experience visceral Star Wars combat.