Jay Cochran - May 25, 2007
We are reporting live from the Hasbro panel here at Celebration IV in Los Angeles, CA. Information is being added real-time so refresh your page periodically to see the latest updates. Information is coming fast and furious; please excuse spelling and grammar errors. Later, check back for a recording of this panel to experience the sights and sounds of a live Hasbro panel (maybe just the sounds...).

The panel has begun.

Derryl makes a joke about running back to the booth -- he's had practice on the mornings he runs to beat the hotwheels guys at Target in the quest for Star Wars stuff. Today's panel features Derryl DePriest, Mark Beduex, Brian Wilk, Brian Parish, David Venomier, Biran Merk and Chris Guliver. Derryl thanks everyone for continuing to make Star Wars sucessful. For the first time, today's kids probably will be attracted to Star Wars by a TV show instead of a movie.

Force Unleashed video game comes out in the Spring 2008. Clone Wars television series is coming in 2008.

New Cinema Scenes will be out this Fall for Galactic Heroes with two each for Wal-Mart, Target and Toys R Us. Caninia Scene with lights and sounds and Secondary Cantina Encounter with Snagletooth will be in Wal-Mart. Battle of Naboo with Qui-Gon and Jar Jar due in July to TRU. Battle of Hoth with Hoth Leia also coming in July to TRU. Assault on the Death Star appears at Target in November featuring X-Wing Luke with removeable helmet. Jabba's Palace with Bib Fortuna and 3PO with some green slime also hits Target in November.

Battle Packs Unleashed Wave 4 will be on shelves July 15th.

Star Wars Transformers: New Deco Obi-Wan vs Vader at Wal-Mart. Wave 4 due out in November has an AT-AT turns into AT-AT driver, Turbo Tank turns into Comander Cody, and Snow Speeder turns to Luke. Darth Vader changing to the Deathstar is due out in October.

All 60 3.75" figures with coins should be out by January 2008. If you have badly scratched coins, you can send them in to Hasbro for replacement. Wave 4 is due on shelves by August 1. Wave 5 is coming August 15th. Wave 6 is due out on October 1. Wave 7 is due out around November 1. Wave 7.5 is due out on December 1. There will be deco on the animated clones cloak.

18 comic two-packs are coming this year, including an exclusive wave of 3. Wave 4 is due out on Nov 1. Koffi has a hole in his chest to fit a lightsaber. Wal-Mart exclusive wave is due out October 1. It includes Obi-Wan and Bail with Luke and Leia babies, Marvel #81 with Bona Fett - Sarlacc goo, STAPP Battle pack, Hoth Patrol , Capture at the Droid Factor and Betrayl at Bespin.

New vehicles will be released on December 1st. General Grevious Starfighter will fit a Grevious figure. AT-TP holds 3 figures, third leg retracts up and other two legs pivot up to be taller.

Exclusives
Bantha with correct deco and battlestands. Cantina Band Member with light and sound base is exclusive to Disney Star Wars weekend. Celebration UK exclusives will be the same figures as US version with different coins and name logo. "I am your father" 2-pack comes out at Wal-Mart on June 1st.

ComiCon exclusive will be available on HasbroToyShop. Star Wars online shop will have a concept Grevious.

Y-Wing with Lt. Lepira and Astomech is due out in August at TRU. The droid doesn't come out but you get a droid figure as well. TRU also has Tie Intercepter and E2 Obi-Wan Star Fighter in December.

Battlefront 2 multi-packs will have Internet and previews exclusives in October. ARC-170 Clone Deco and Battle pack troops due out in Target in November. 7" ARC Trooper Unleashed figure released in September as Internet exclusives.

The "Show us your Lightsaber" contest winner is Lee Vehe.

Panel has ended. Check back later for images and podcasts from the panel.
Image 1 of 18 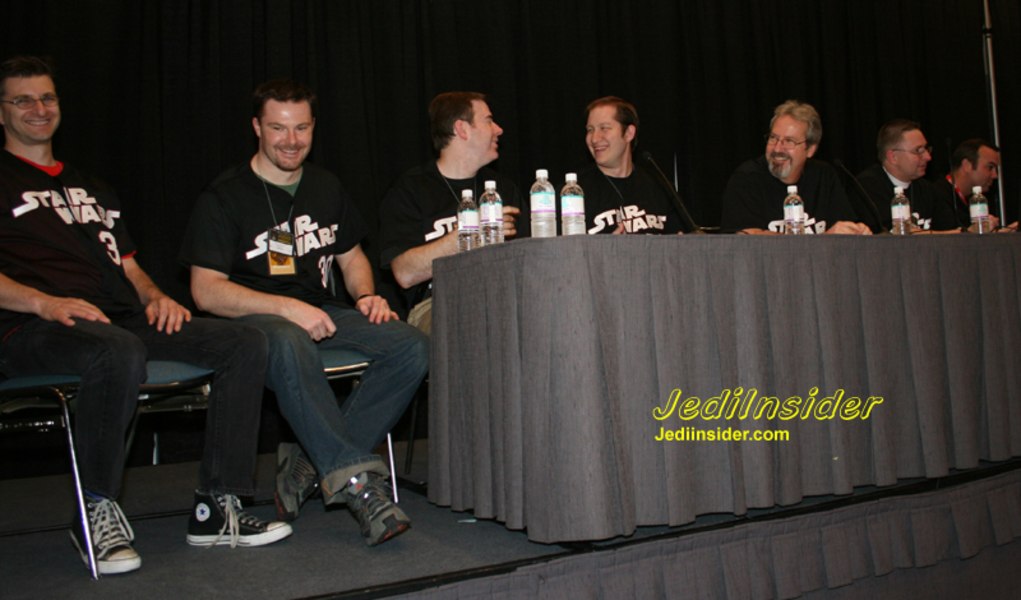 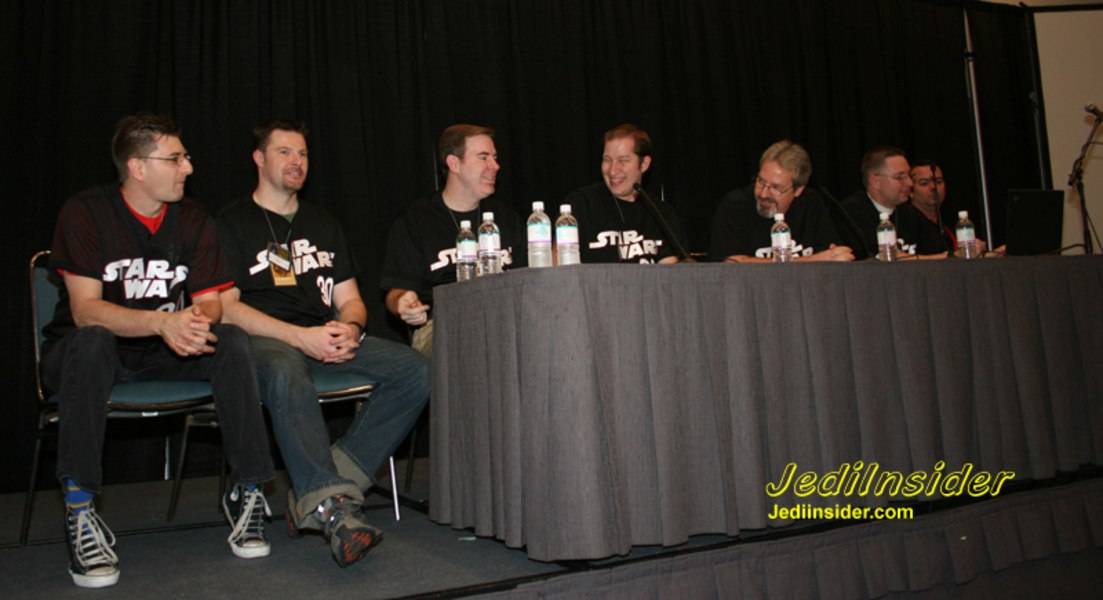 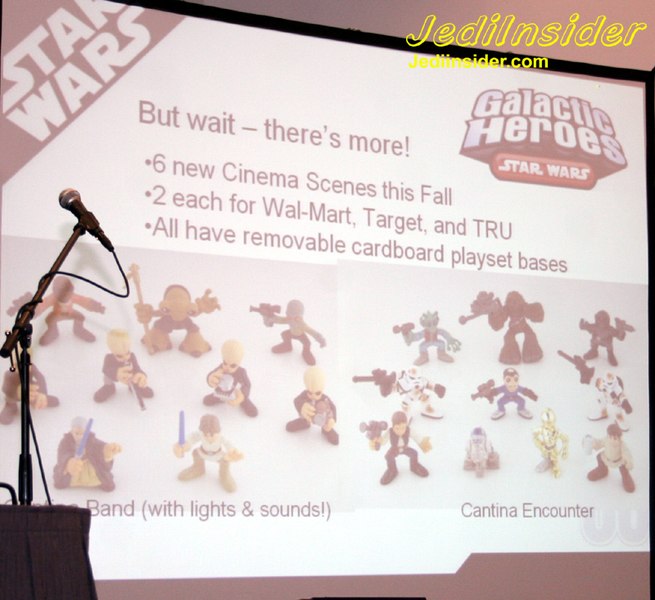 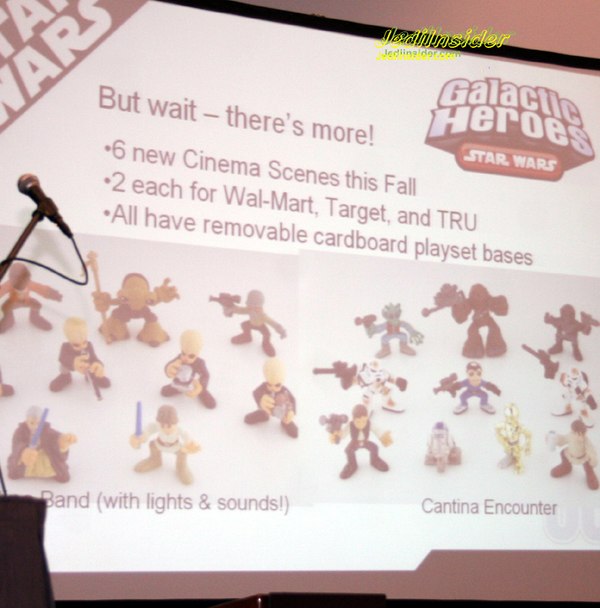 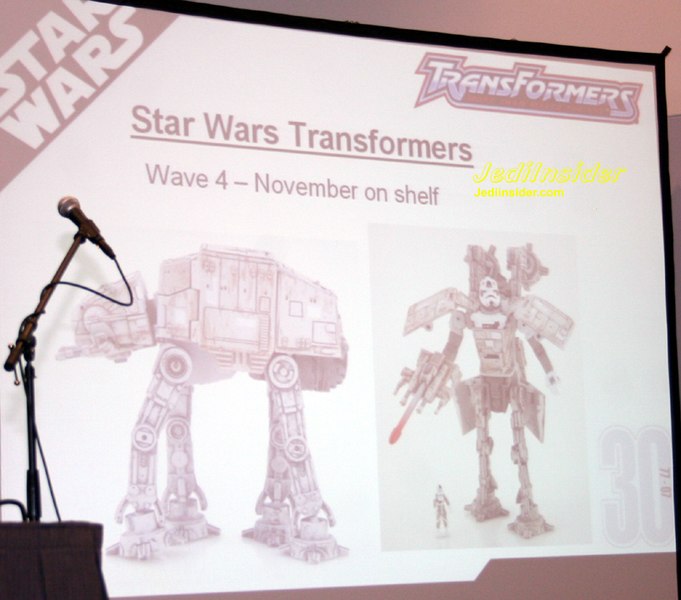 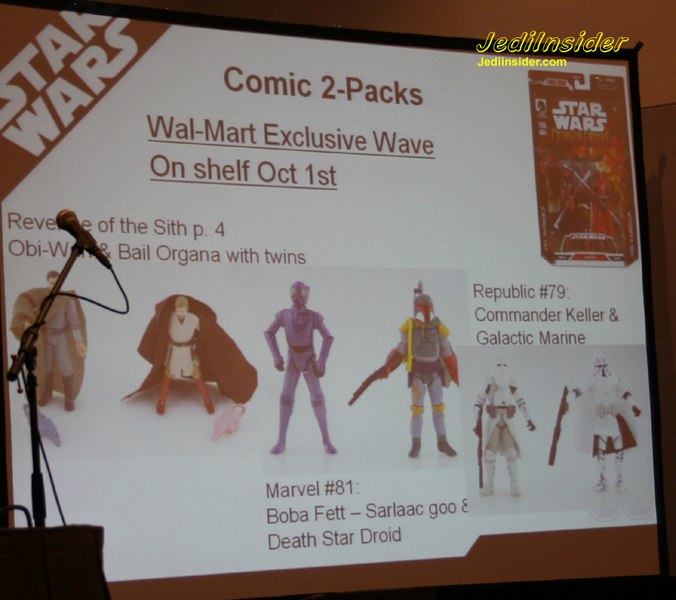 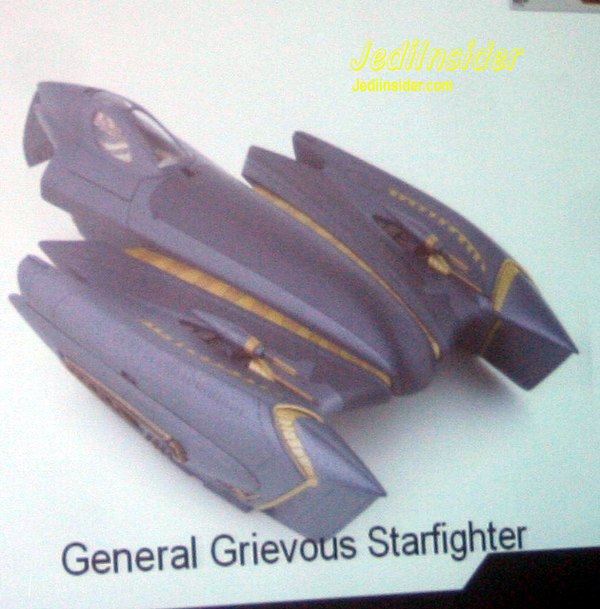 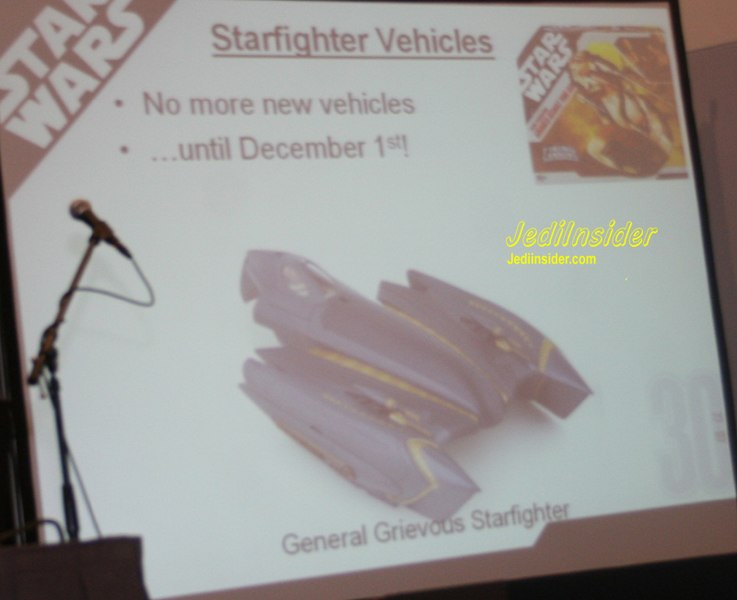 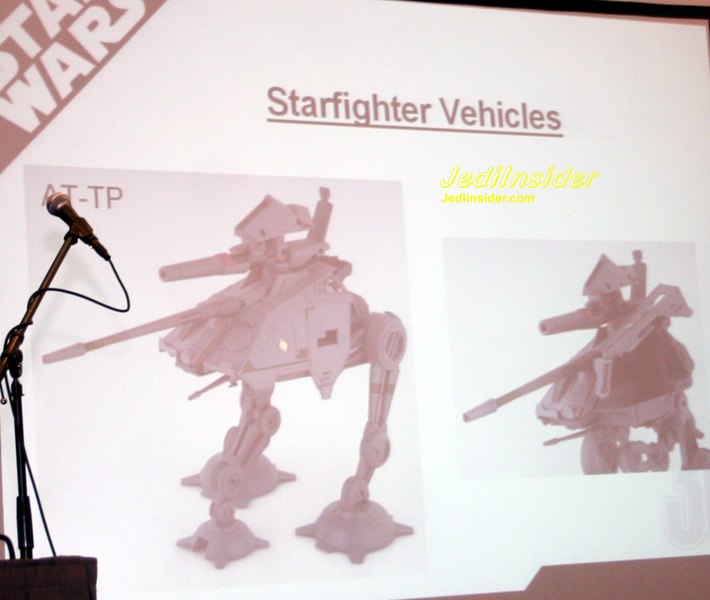 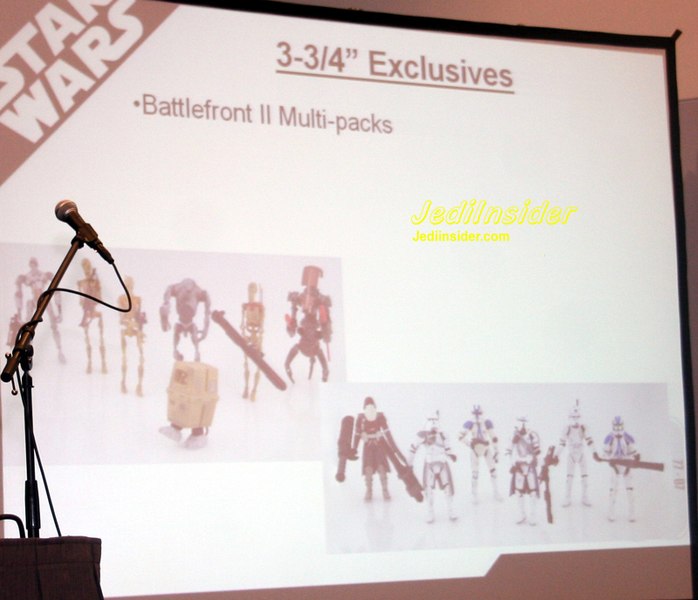 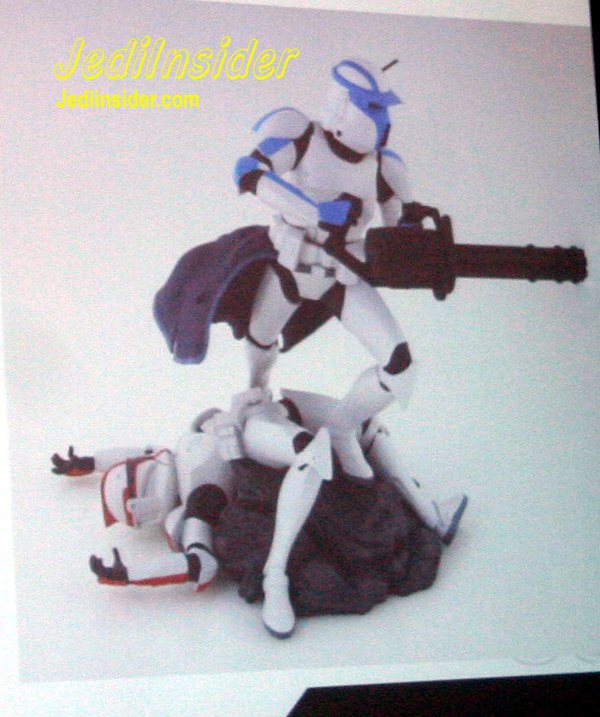 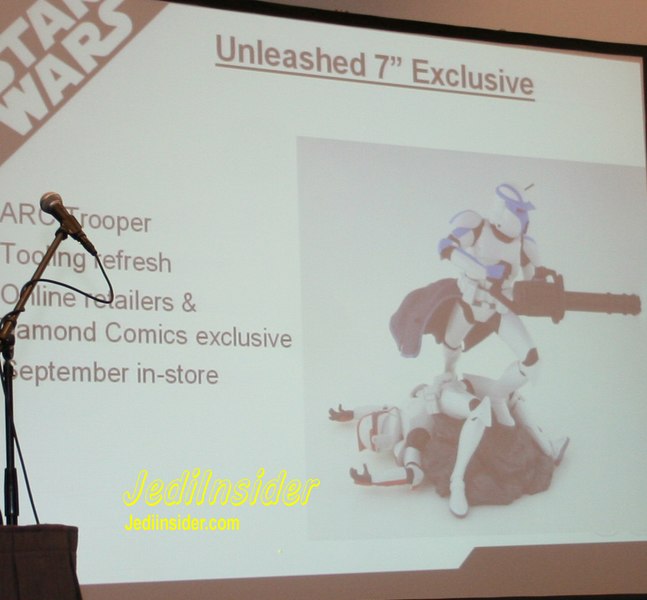 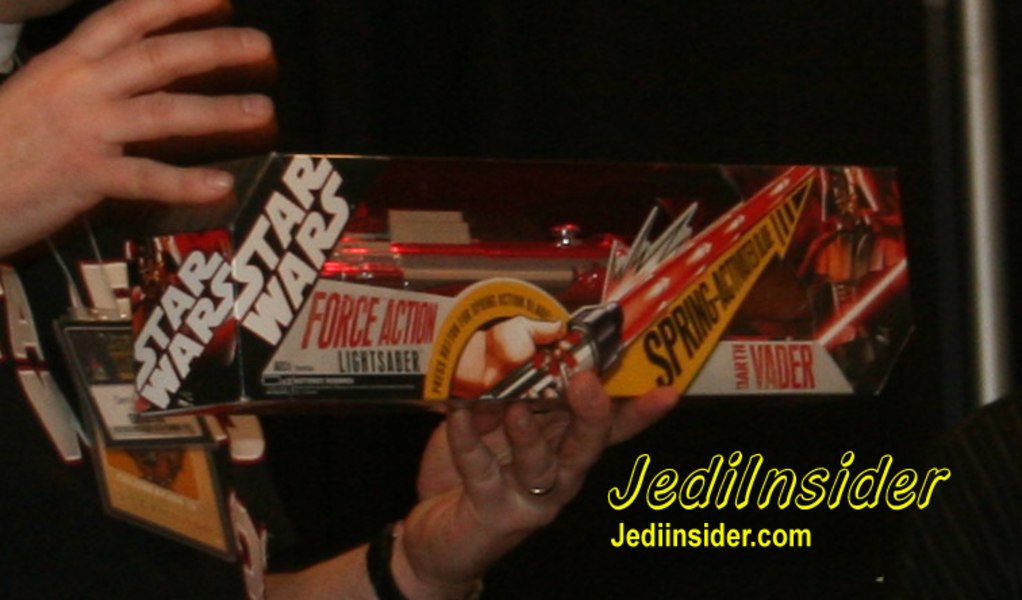 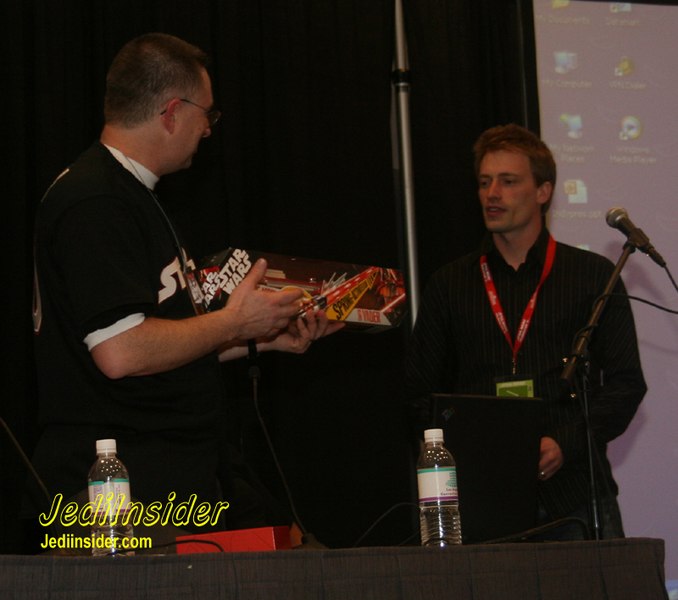 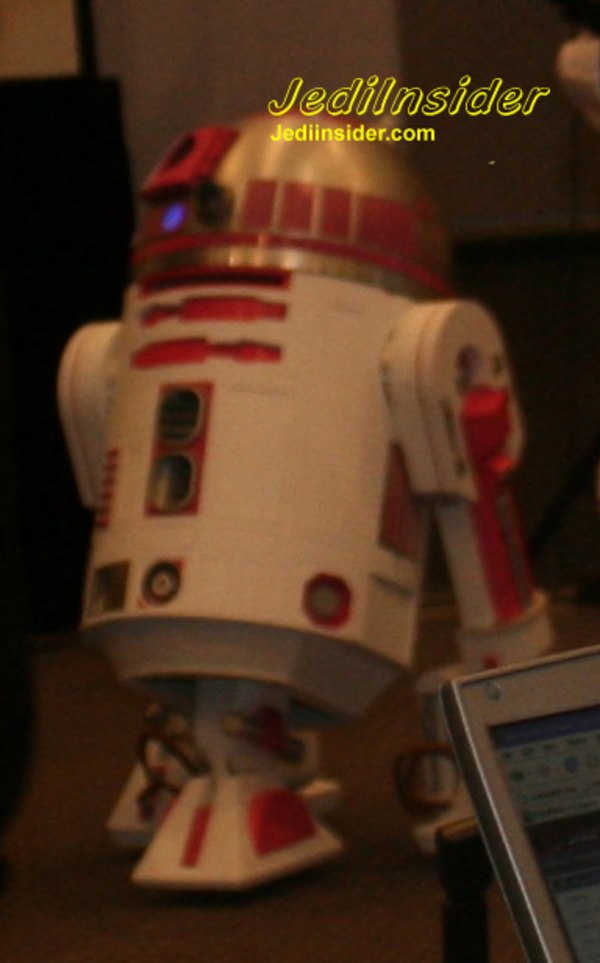 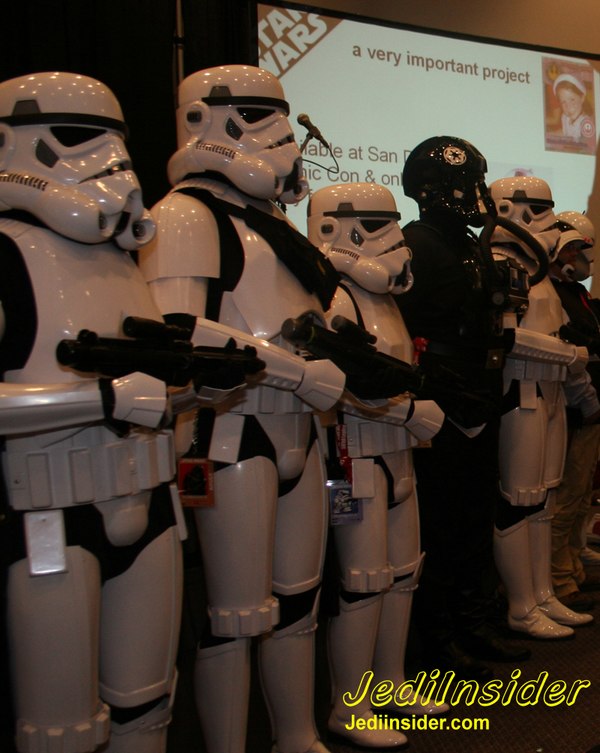 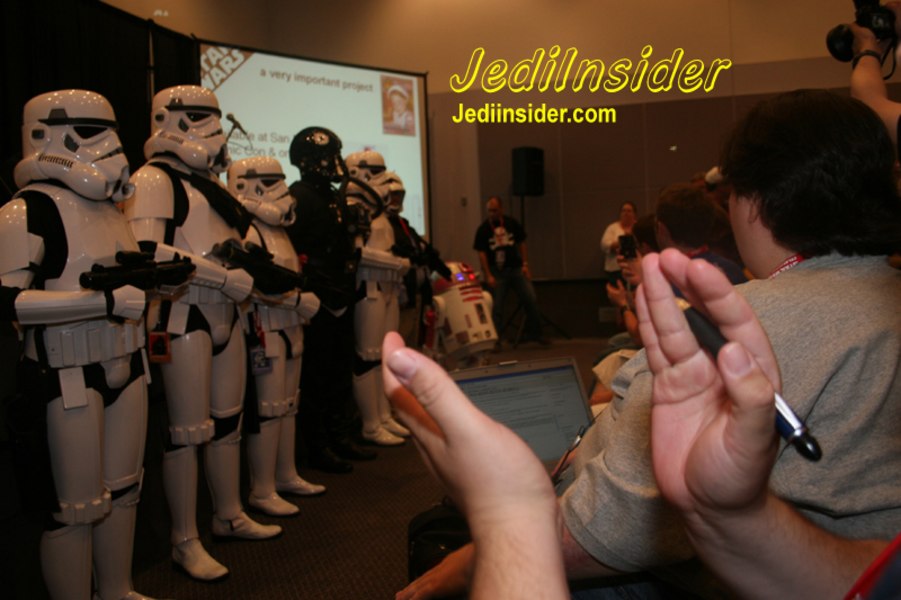 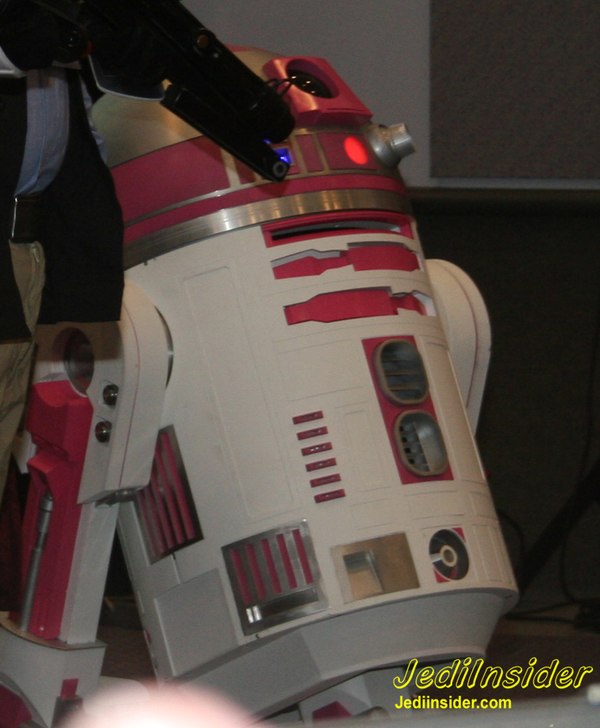