Issue #1 goes beneath the grim breathing apparatus of cinema’s greatest villain to follow Darth Vader as he tracks down a Jedi and Padawan who escaped the deadly purge of Order 66, in ‘Purge: The Hidden Blade’!

‘Invasion’ begins with a terrifying prologue, as a deadly new enemy stirs in the reaches beyond the known galaxy, and the Yuuzhan Vong descend on the peaceful New Republic! Featuring Luke Skywalker, Han Solo, Leia Organa Solo alongside a stunning new cast, ‘Invasion’ is another thrill-packed glimpse into a fan-favourite corner of the galaxy.

Finally, ‘The Old Republic’ kicks off with the terrifying Sith Empire returning to the galaxy to enact its vengeance on galactic civilisation. Can a fragile peace be brokered between these two cultures, or will all descend into civil war? This strip ties into The Old Republic, the incredible videogame MMO released next summer!

Every issue also features competitions to win must-have Star Wars merchandise, with issue #1 including a competition to win copies of The Force Unleashed II video game and an Xbox 360 console!

Subscriptions are now available to buy for Star Wars Galaxy Comic. Get 10% off a one-year subscription - that's Ł34.95 for 13 issues. Click https://bit.ly/9otIpm to subscribe. 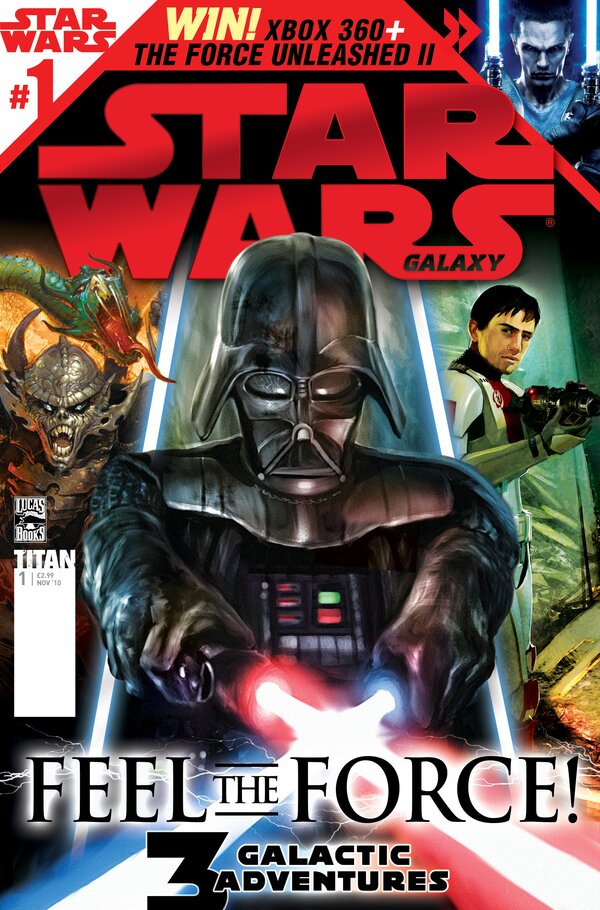 I've 'talked' with the HTS customer service a few times now about the shipping, the best i got was that its 'coming soon' (haha). I referenced that "by spring 2008" article when i sent them my first message, and it was taken down shortly afterwards, so take what you will from that.

As for mattycollector, the site is just meant for exclusives and such, there wont be any general retail releases sold on the site. But yes, they ship to Canada, so I'm all over that. Ordered me a lobo as soon as the site went live, just waiting for it in the mail now.

And synch, those MOTUC figures are being released 1 each month, which is why theres only a couple up right now. I read somewhere that they're also not doing preorders, at least for the first few, so ya gotta order em once they go up (im sure there'll be notification in advance).

first off u talking about dc in marvel fourm.........second its a website thats been up for liek 2 weeks give it time im sure theyll have more junk up soon

They sell the exclusives and ship to Canada, so, yah, much better then hasbrotoyshop

I would like to order from hasbro, I dont understand how shipping to Canada, or anywhere else for that matter, would be any different

Yes I was looking at there site today & right now its ****ing pointless! They have nothing up but sold out exclusives which frankly should be removed once they are sold out ... and they have up two lone figures of the new MOTU ... how ever they say "coming soon" rather than having up a preoders :S granted they may simply just not know what prices to put up but still... They should really have DCUC up there as well the regular waves...

its a ot harder to ship to other countries mre is involved and cant do a flat rate to mail out.....if anybody wants help lmk and we may be able to work soemthgin out.

They sell the exclusives and ship to Canada, so, yah, much better then hasbrotoyshop

I would like to order from hasbro, I dont understand how shipping to Canada, or anywhere else for that matter, would be any different

Hasbro should really learn from Mattel. Mattel's new collectors website offers international shipping. I don't get how complicated it is to ship to Canada...... At least it's cheaper than vice versa.

Canadian consumers have been getting the same canned answer from Hasbro for years now--I remember asking Hasbro about this around 10 years ago.

I've simply given up on them, and will only believe it when I see it.