Jack - July 04, 2006
The Star Wars Transformers line: to some, it is the best of both worlds. To many, it is an unholy synthesis of worlds that ought never to have come to pass. Then there are the rest of us that fall in the middle somewhere. Whatever your expectations of the line, the Millenium Falcon gestalt set may yet surprise you. 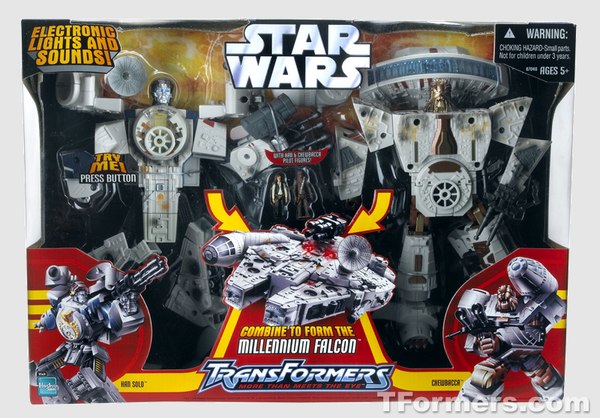 DESIGN: Like most of the other Star Wars Transformers, the Millennium Falcon has some minor distortions in proportions and details but otherwise does a fantastic job of evoking the original vehicle. The thing is chock full of details including paneling and various gizmos attached to the hull. I'm almost surprised they didn't include fuzzy dice in the cockpit! It's a little smaller than the original scale, though not by much—certainly not like General Grievous’ wheel bike. The gun pod mounted on the top, Chewbacca’s bowcaster on the bottom, and the missile on the left-hand side do kinda stick out, but at least they’re removable. 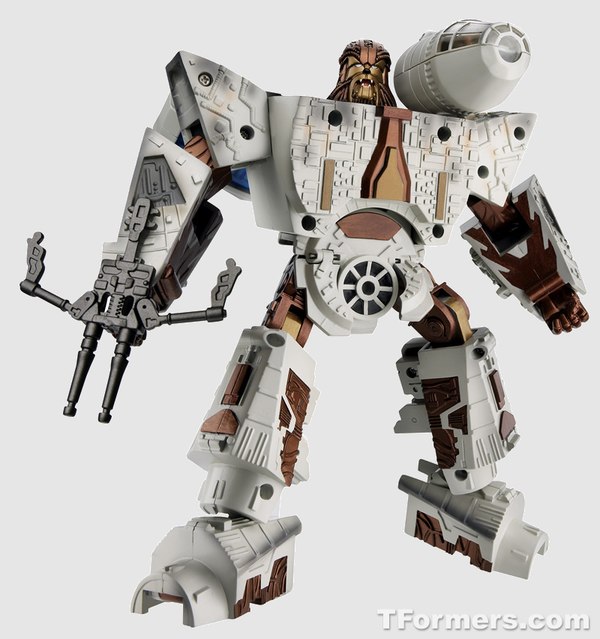 The same amount of care in design shows through in robot mode as well. When Hasbro first announced they would do a Han Solo/Chewbacca combiner for the Millennium Falcon a number of online fans “expressed concern,” shall we say, over the idea of a fuzzy Chewbacca being shoehorned into a metal body. Having seen the finished product, though, I think the designers made some good choices. For one thing, they stuck to a hard-core mech design aesthetic instead of trying anything techno-organic. Tubing details on Chewbacca's head and hands effectively evoke fur patterns while still looking mechanical enough to fit with the rest of the robotic body. Brown patches of color in the paneling on the rest of Chewbacca's body also suggest fur without actually putting fur anywhere on him. Angular designs on the forearm do an especially good job with this effect. There's even a detail on the engine block mounted on Chewbacca's back that recalls the ammo clip he wears around his shoulders. Flip-out paws on Chewbacca's feet complete the impression that this mech was modeled on an animalistic sort of creature, while the cockpit for Chewbacca mounted on his shoulder, his “bellybutton,” and his jet pack visually tie into his vehicle mode.

I think Han Solo's robot mode also effectively represents his character. As with Obi-Wan Kenobi and Anakin Skywalker’s Transformer figures, Han Solo's silver face manages to look both mechanical and like the character it's supposed to represent. In fact, I think Han Solo's head does this better than the other two. The Han Solo mini figure pilots his neck from a cockpit mounted on its chest. Both robot modes make good use of vehicle mode parts without too many extraneous chunks of ship hanging off them. Hans Solo's shoulder pads would be an exception to this, but at least they stay out of the way fairly well. Both modes do seem kinda blocky and primitive in a way, but I actually like that since it fits with George Lucas's vision of Star Wars as Neo-pulp science-fiction. 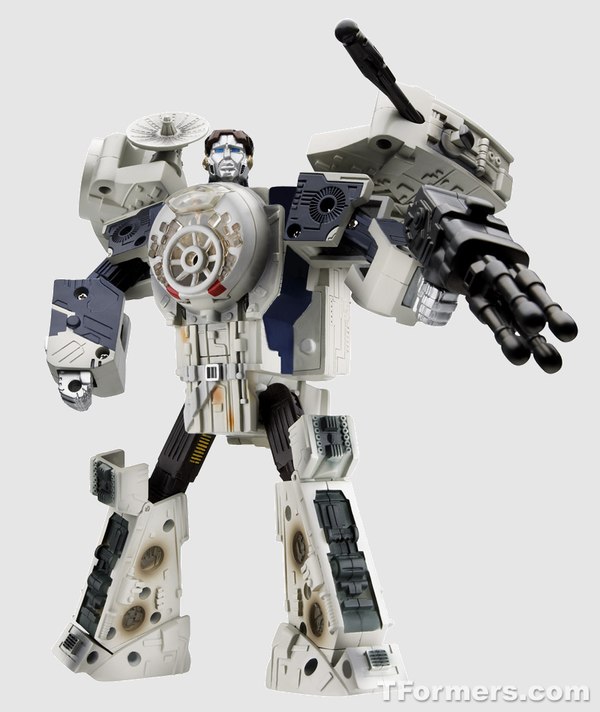 POSEABILITY: Both robots prove quite supple, and their combined ship form is about as poseable as can be expected. Hans Solo's robot mode features 21 points of articulation, not to mention hinges that get his shoulder pads and knee pads out of the way. This includes ankles that move along two planes which allow for a wide range of stable poses, and swiveling wrists for better aim. Chewbacca has the same basic articulation, although his ankle articulation proves a bit more skittish.

GIMMICK: These remain pretty basic for most of the Star Wars Transformers line, consisting of a spring-loaded projectile weapon in the transformation itself, much like the early G1 TFs. In this case Han Solo gets both spring-loaded missile launchers, one on his shoulder, one a handheld blaster. Poor Chewbacca's bowcaster only works off the power of your imagination—no springs here.

Unlike the rest of the line, however, the Millennium Falcon also features lights and sounds. Both robots have their own sound chip, and both sound chips feature sound effect and spoken phrases depending on whether the sound button is tapped or held down. Holding down the button on Chewbacca's engines activates a sort of whooshing sound and lights up the whole thrust aperture. Holding down Han Solo's button activates blasting sounds and lights up two forward guns with red LEDs. To my great surprise and delight the phrases for the sound gimmick were taken directly from the movies, and they’re crystal clear. I remember how excited I was to hear Peter Cullen's voice coming from Air Attack Optimus Primal, and hearing Harrison Ford's voice come out of a Transformer proved no different. Hans Solo's voice chip includes five phrases (I won't spoil them for you), while Chewbacca’s voice chip splices together four different growls in various binary pairs. Admittedly this approach makes them sound a little more like the Tonight Show bear, but it's still fun. 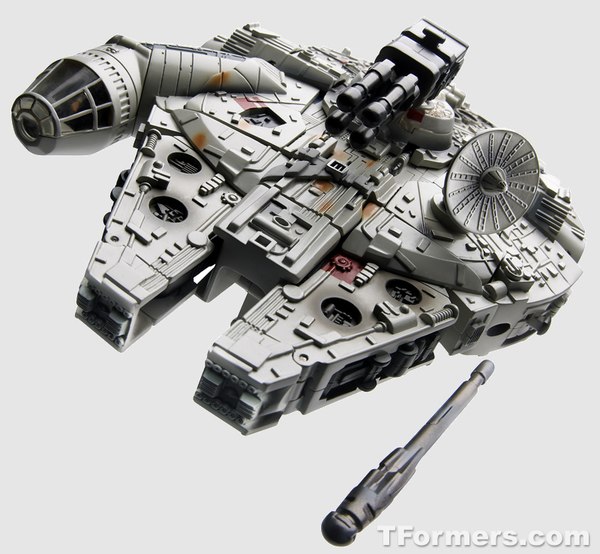 TRANSFORMATION: Starting with vehicle mode, you must first separate the Millennium Falcon into two halves. May the Excessive Force be with you. I get images of the Rangkor ripping into something every time I start transforming them. It sometimes helps if you loosen joints around the juncture where the two halves connect before trying to rip it apart. I also suggest growling as you do this—it’s kind of fun :} I would actually recommend using the directions to transform the limbs on each robot; they seem pretty arbitrary at first but they make sense after a few transformations.

BIAS: I must admit that I've gone completist on my SWTF collection; I'm even considering getting Jango Fett—the only pure repaint in the line so far. I don't buy them as a Transformers collector, though, but as a Star Wars collector. I like Star Wars, but I've never been impressed with the action figures and never really got into collecting them until these things came around. The transformation gimmick makes them marginally more interesting to me, at least interesting enough to drop 15 bucks a figure on them. But I do think there are a little overpriced for what they are: glitchy deluxe’s without gimmicks. Vader’s floppy in vehicle mode, Boba Fett’s legs are pain defined, the two Jedi starfighters look too barrel-chested, and Grievous and the Emperor tend to fall apart (battle damage! :} ). Sometimes I feel like I'm paying the extra five bucks just for the Star Wars brand name. So even though I'm a completist, I’m not an especially enthusiastic one.

OVERALL: That said, the Millennium Falcon rises above its fellows in the Star Wars Transformers line. For $35 (at most stores) you get two figures about the size and complexity of a Voyager class mainline Transformer. Beyond the purchase value, though, these two are good action figures and pretty decent TFs. Unless the combination of Transformers and Star Wars runs against your fundamental sense of right and wrong, I'd suggest you give these guys a chance.