When Uncle George was writing and rewriting the many drafts of his epic space opera, Ralphe McQuarrie was giving life to Lucas's manuscripts by producing various painting and illustrations of the principal characters. At one point early on, there was no Luke Skywalker and Princess Leia seperated at birth, etc. They were originally conceived as personality traits of a single character: Hero Starkiller. He had toyed with the idea of making the story's protagonist female, then decided that it would be male...then further revised the idea to become the smart-mouthed princess and whiny moisture farmer who shared an onscreen kiss that left millions of us vaguely uncomfortable once we learned that they were related in ESB.

McQuarrie's ideas for the heroes of Star Wars had heavy medieval influences. McChewie has an alien "Little John" look to him, with his stitched tunic and pointy slippers, for instance. Starkiller is no different with her lavender tights underneath tanned form-fitting leathers and thigh-high moccassan boots. She looks like she could have a bow and quiver full of arrows just as easily as she could brandish a blaster. Whatever the case, it works. Though Lucas ultimately mixed 1930s art-deco with the far-futuristic to give the Star Wars universe its "used, fallen from grace" feel (especially on Coruscant), McQuarrie went back to the 1200s for his inspiration. He seemed to see Star Wars as a kind of "Macbeth in Space."

Starkiller stands a tad on the short side at 3.25" tall, keeping with her lithe frame. She has ball-socket joints in the neck, shoulders and knees; angle-cut joints in the elbows and straight-cut joints in the torso and hips; and swivel joints in the wrists. A common thread in Wave 5 seems to be lack of joints in the ankles. She strikes the classic "superhero" stance, with her legs at a full 30 degree angle. For her, this works. For Moff Jerjerrod, not so much...

The paint scheme is nicely done, except for where flesh-colored paint spattered across her right breast. That is why I didn't remove her small vest for photos. From a distance, she appears to be flashing her goods, and this IS a family site after all! Starkiller's hair is meticulously sculpted. Although it has the basic cut that Luke wore, it has quite a bit of loose curls in it, giving her quite a feminine appearance. She wears a leather utility belt and holster around her waist, with what appears to be a gas canister attached to it (grenade or thermal detonator, perhaps?). The vest I mentioned is similar in nature to the white vests worn by X-Wing pilots, with a pair of electrobinoculars affixed to the front. Her back has a GI Joe-like hole in which a backpack fits. The backpack itself is silver and almost looks like the ones that Snowtroopers wear, except for the SCUBA-like facemask and hoses that attach to it on each side. Obviously this is supposed to be some sort of EVA gear that allows her to operate in evironments with very little or no atmosphere. By the time of ESB, these devices had been reduced to small canisters with a simple hose and clear facemask. Her hat (for lack of a better term) is reminescent of protective headgear a highschool wrestling team would wear. It fits snugly around her neck and jaw, leaving the entire top of her head open to the elements. And resting on the front of this headgear are a pair of aviator-style goggles...

The lightsaber is the most interesting item she comes with, in my opinion. By the looks of it, this is what eventually became Obi-Wan's lightsaber in Episode IV, but not nearly as compact. In terms of comparison, this thing would probably be the same size as one of the Hasbro spring-activated lightsabers. In other words, twice as big as the official movie props and its emitter disk is much larger, giving it a kind of retro 50's sci-fi look. The blade is removable from the hilt. Her other weapon is instantly recognizable as an early version of Han Solo's famous blaster pistol, complete with its signature nozzle-like gunbarrel.

Finally, Hasbro hit the nail on the head with one of Wave 5's figures! About freakin' time! But I have yet to see a Mcfigure that hasn't been given lots of love and attention. This one's a keeper, folks. Keep an eye out for her...because if the eBay sellers in my area are any indicator, she's going to be hard to get ahold of (at least at a retail price).

I give the McQuarrie Concept Hero Starkiller 4.5 Death Stars.
Image 1 of 4 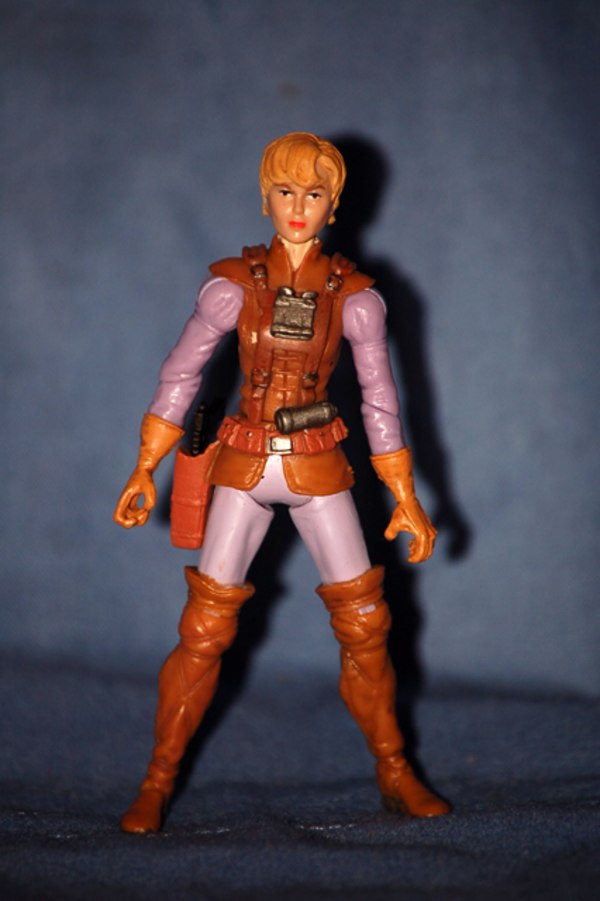 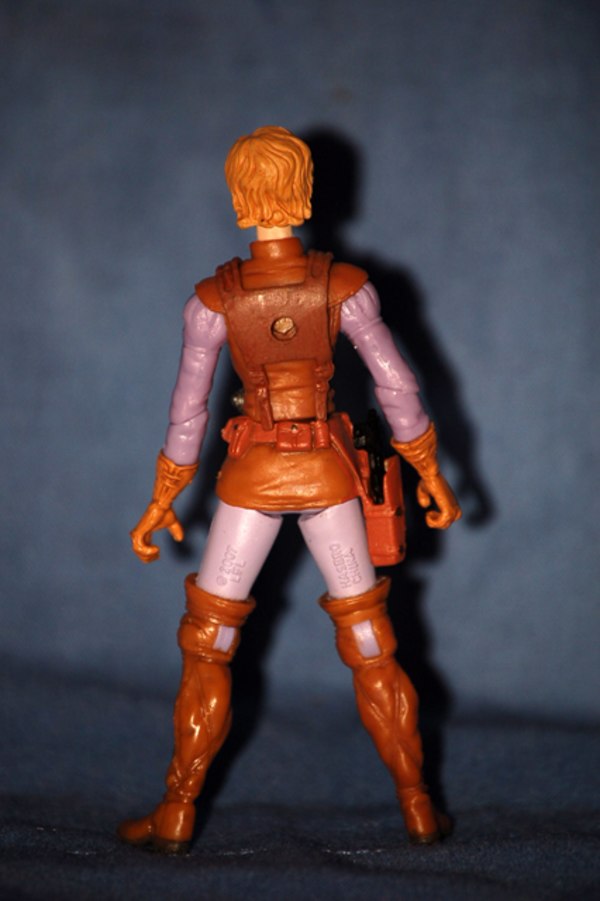 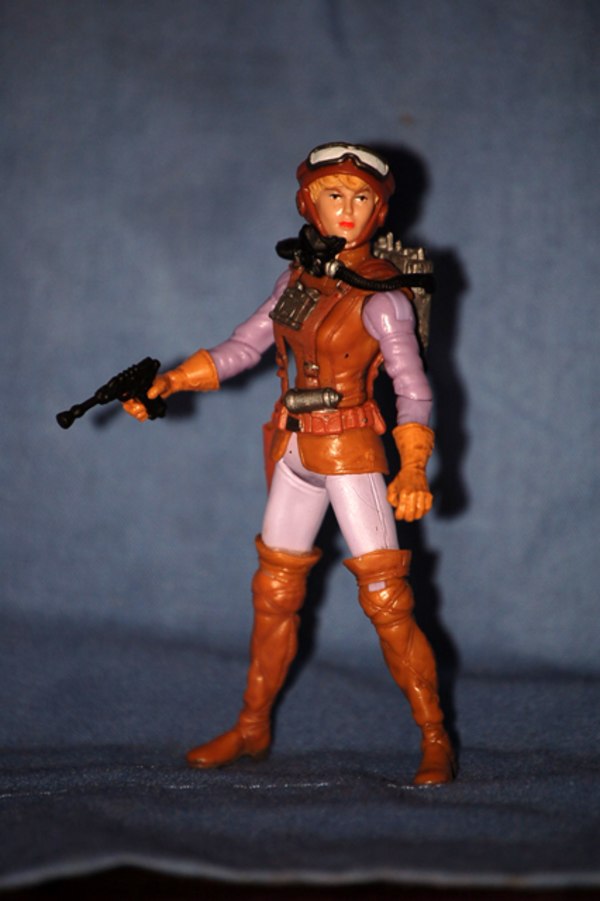 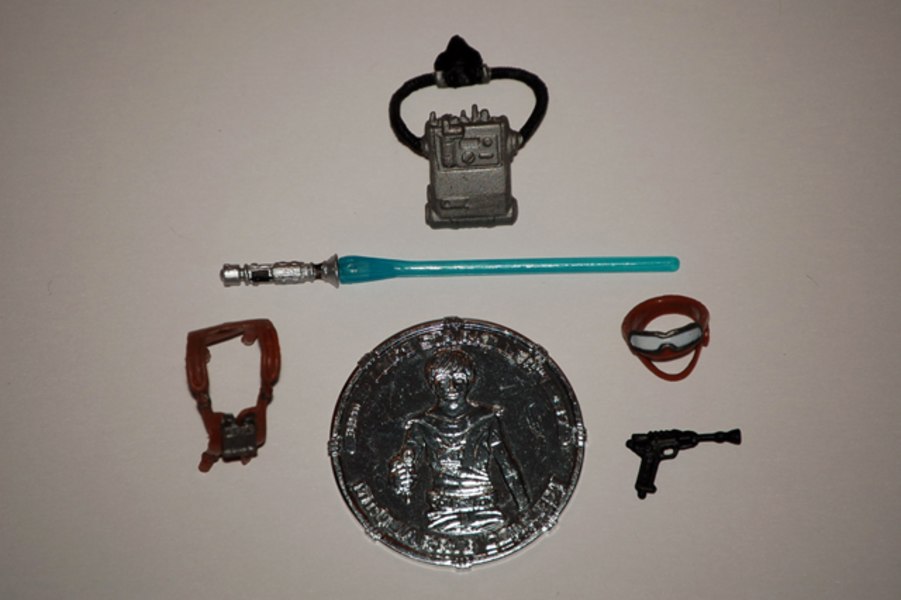