Bespin refugee - October 06, 2007
Okay, according to The New Essential Guide to Alien Species, Grievous was a tribal leader from the planet Kalee who brought all of the different tribes of his fellow reptilian Kaleesh together to fight a race of insectoids called the Huk that had invaded their homeworld and had set up a lucrative slave trade, selling hundreds of thousands of Kaleesh to the galactic underworld. Due the the Kaleesh's brutality against them, the Huk requested assistance from the Galactic Senate. The Old Republic blockaded Kalee and imposed draconian economic sanctions against its people, and all of this was enforced by the Jedi Order.

Seeing his people starving by the millions as a result, Grievous became even more comtemptuous against the Old Republic and especially the impartial Jedi. The Intergalactic Banking Clan offered Grievous a deal where he would act as a collection agent against worlds that had defaulted on their loans. Though he did not like it, he agreed because the IGBC promised to give much-needed financial relief to his people. But when the Trade Federation refused to punish the Huk for desecrating Kaleesh burial grounds on some of the Huk colony worlds, Grievous abandoned his job. The IGBC decided to repay his lack of commitment with setting off a bomb aboard his ship. Wounded from the subsequent crash, Grievous was given a new cyborg body by Count Dooku and San Hill. After this, the greatest military commander in Kaleesh history became little more than a common lackey for the Separatists...until he was totally punked by Obi-Wan Kenobi on Utaupau...

There ya go...the official Lucas-sanctioned backstory behind General Grievous.

This review is on what I like to call "Meatbag Grievous." Honestly, I don't know what to think of this figure. Because a tragic backstory does not a good figure make. The first thing I noticed about Grievous is that he's tall...REALLY tall! He stands eye-to-eye with VOTC Chewie at nearly 5" tall. At first glance, he appears to be pretty cool decked out in a tattered cloak, mummy-like wrappings on his torso, feet and arms, his battle headdress adorned with a karabba skull that mirrors his future cybernetic faceplate, and knee-length loincloth. The cloak features two leather pauldrons, a sword scabbard on the back and a bandolier with what appears to be three poison darts. Grievous features ball-socket joints in his neck, shoulders and knees; straight-cut joints in the torso and hips and swivel joints in the wrists. This gives him a fair range of motion, to be sure...but what completely ruins this figure for me is the decision that Hasbro made to mold his arms at a permanent 70-degree angle. The paint scheme is a weird mix of sloppy hand-painted hands with most of the rest being clean, crisp stenciled paint. Grievous is done primarily in earth tones of ruddy browns, tans, and reds. Overall, it is kept faithful to the picture in the New Essential Guide...

The other thing that kind of bothers me is that when I removed his headdress, I saw a tusked Grinch Who Stole Christmas staring back at me. No matter how I tried NOT to see it, Dr. Seuss kept coming to mind! I was also kind of surprised at how skinny Grievous was before getting all borged up...but I suppose that sort of explains why he had such a skeletal frame as a cyborg. And I would be remiss if I did not warn you all that he is completely naked underneath the loincloth...though fortunately Hasbro did NOT feel the need to make him "anatomically correct." Thanks on that one, Hasbro!

Honestly, I see this version of Grievous as a novelty figure only. So-so articulation mixed with horribly preposed arms and a sort of goofy face ruin the overall excitement I had felt for this figure when I first saw pics of it. If I were you all, this isn't one of those figures that you need to fight scalpers, eBay sellers and rabid collectors to get your hands on. Kind of a disappointment, really. The only thing that saves it from getting a lower score is the fact that it IS a brand new sculpt of a character in a form that we have never seen before. But a disappointing figure is a disappointing figure, whether it is a new sculpt or a figure rehashed for the millionth time.

I give Pre-Cyborg Grievous 3 Death Stars.
Image 1 of 5 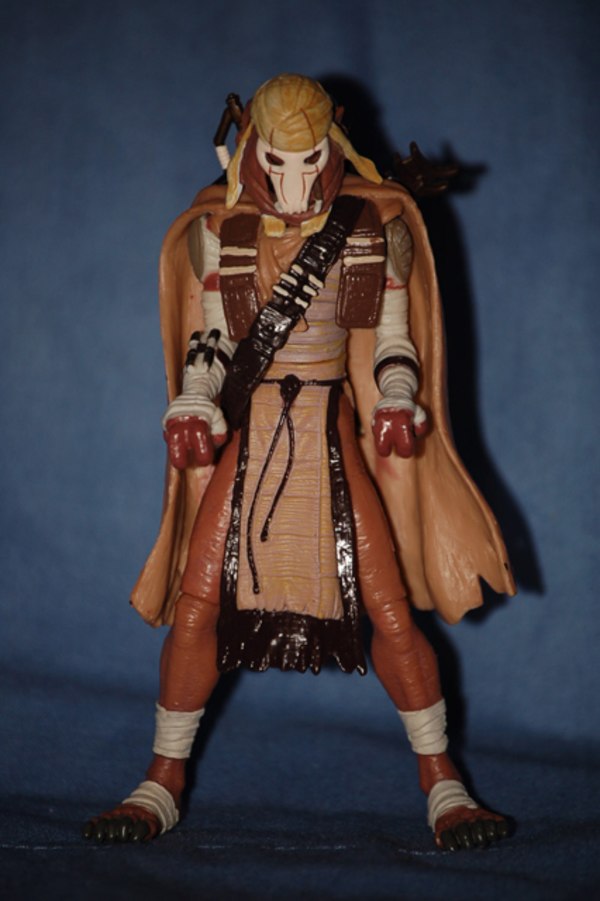 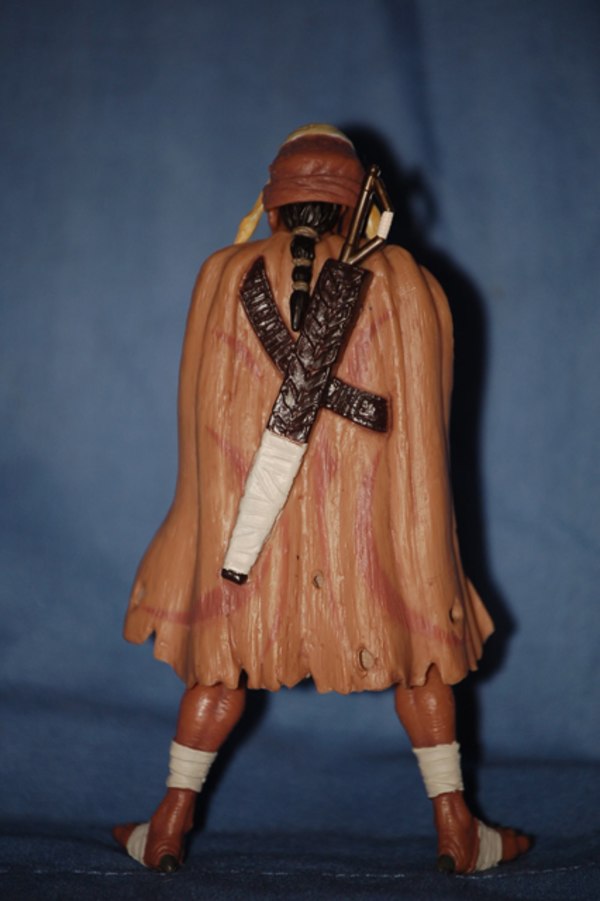 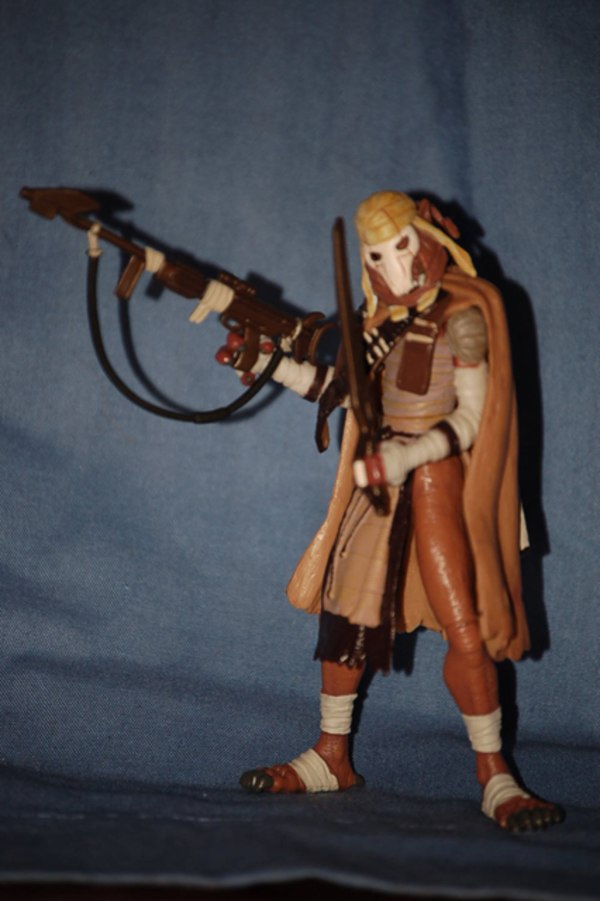 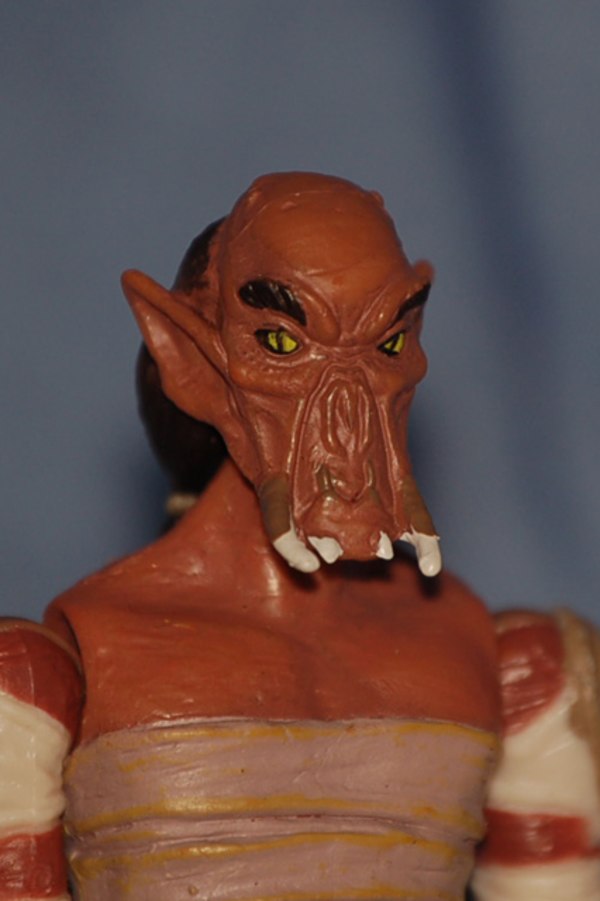 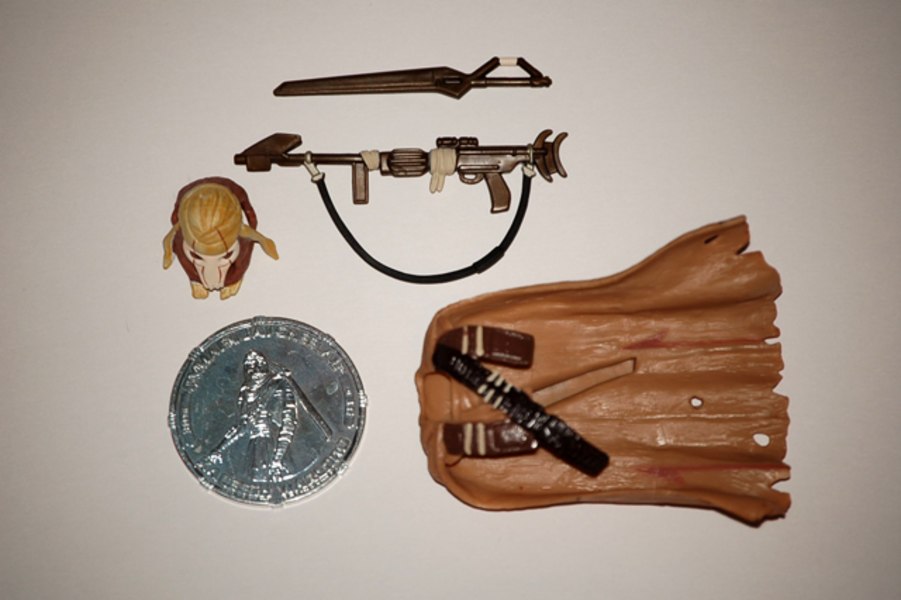