Bespin refugee - June 28, 2007
"Inspired by his Alaskan malamute, George Lucas created one of the most enduring and well-loved non-human characters of his saga. Constructed from knitted mohair an yak fur, Chewbacca was given life by the actor Peter Mayhew and voice by a wide array of animals from walruses to black bears." ----from the figure card back.

Ever since I was a kid, I had always wondered what a shaved Wookiee would look like...and now I know! A bizzare cross between a lemur and Nasferatu the vampire, McChewie is a somewhat disturbing insight into what our favorite walking carpet may have ended up looking like. The figure is absolutely massive, along the same general size specifications as Tarfell was. But unlike the Wookiee chieftain, McChewie is very skinny in comparison. And unlike any Wookiee in the current Star Wars mythos, McChewie is dressed in clothing. Granted, the outfit is more akin to something that one of Robin Hood's merry men would be seen wearing, with its medieval-looking tunic and hand-stitched moccasin-style shoes. Even so, there are futuristic flourishes on the outfit as well, such as the shoulder pads, gloves and armlets. Chewbacca's trademark bandolier that we know was born out of the concept of two criss-crossed bandoliers running across the creature's chest, with a blaster pistol holster attached to the bottom of right-hand one. The head is by far the creepiest aspect of the figure. The yellow eyes look off in slightly different directions, just enough to give McChewie a kind of "dead" look. The mouth has an upper row of fang-like teeth, and the ears are large and pointed. One of the more interesting things about the head is that McChewie was apparently meant to be balding. He has longer fur around the edges of the head which wrap around to the front, forming a beard...but the top of the head has only tufts of fur. A Wookiee that needs Rogaine? Poor sap...

This figure has articulation to spare, but due to some molding issues, it cannot take full advantage of it. It has 7 ball-socket joints (neck, elbows, knees and ankles), 5 straight-cut joints (torso, shoulders, and hips), and 2 swivel joints (wrists). McChewie suffers from IOS (Imperial Officer Syndrome), were he is incapable of being posed in a sitting position because of the lower tunic piece blocking hip movement. Thus, this concept figure is destined to forever stand in place. As I said before, McChewie towers over all other figures at a whopping 4.5 inches tall. He is even taller than VOTC Chewbacca, and I thought THAT was a ridiculously large figure...

The paint app is flawless, with the possible exception of the off-kilter left eye. Nothing was overlooked on this figure, from the snaps on all of the bandolier pockets and the holster to the white lace stitching on the shoes. The paint scheme is done in muted greys, blues and browns, with a smattering of silver here and there...which are a nice contrast to the bright yellow eyes...and it all works for the overall look of the figure. The fur itself is done in several different shades of browns to give it a very nice depth of realism. I can't see anything wrong with McChewie as far as this aspect goes...

Accessory-wise, McChewie comes with a moderate number of items. But trust me, that's all he needs! First off, he brandishes something that I will heretofore refer to as a BFG (big effing gun)...a large rather nasty-looking silver cannon that makes canon Chewie's bowcaster or a Clone Trooper's DC-15 Blaster Rifle look like NERF guns in comparison. This thing looks like it could take down starships with one shot on a low-power setting. The other weapon that is included is a very interesting one. It's the weapon that both the DH-17 Rebel Blaster Pistol and the E-11 Stormtrooper Blaster Rifle (and to a lesser extent, the aforementioned DC-15) were both taken from. The front of the weapon is the E-11's barrel simply turned upside down, with the manual sights on the bottom and the extendable stock running along the top of the blaster. The rear of the blaster features the scope, handle and trigger assembly of the DH-17. I found this blaster to be fascinating, considering that both factions of the Galactic Civil War took their signature weapons from this one gun.

From a collector's standpoint, McChewie is a must-have, if you are planning on getting ahold of ALL of Mr. McQuarrie's creations. He can also serve double duty as an as-of-yet unknown alien species milling around in the background of any diorama. I'm going to assume that this is going to be one of the harder-to-find figures of the TAC line. Grab the shaved Wookiee if you come across him in your travels.

I give the McQuarrie Concept Chewbacca 4 Death Stars.
Image 1 of 5 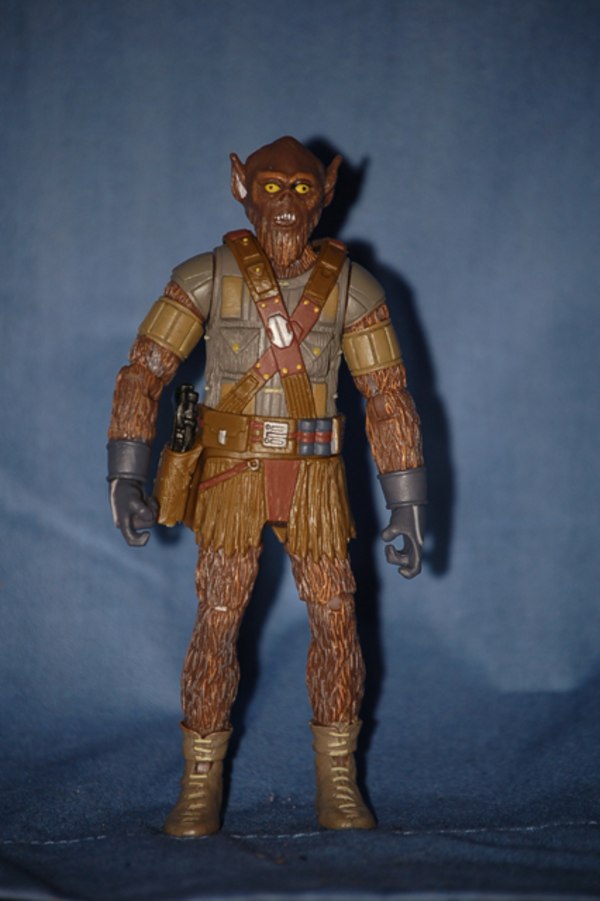 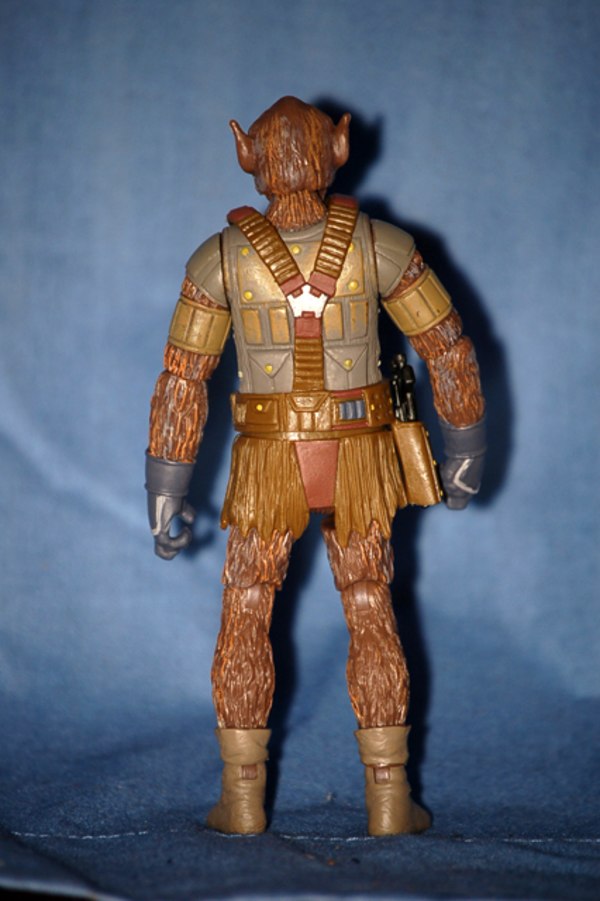 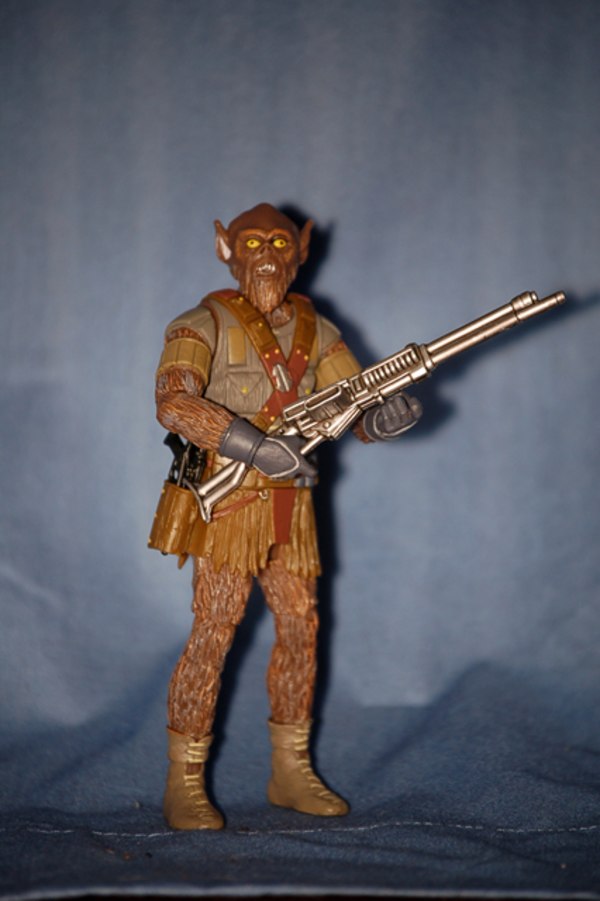 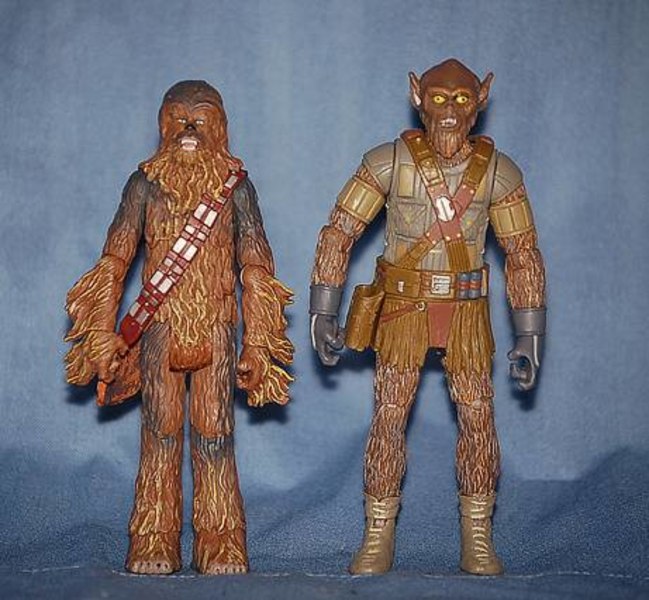 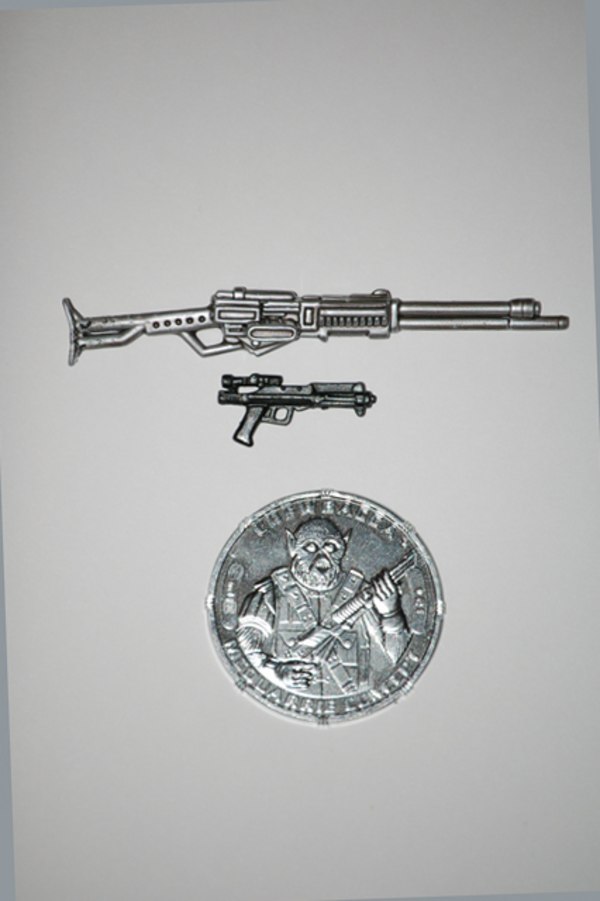