Bespin refugee - May 30, 2007
As far back as I can remember, Han Solo has always been my favorite Star Wars character. My first Han Solo figure was the ultra-rare (although who knew at the time, right?) "small head" version. Then later on, I ended up with the more common version with the retooled head after our dog discovered that Star Wars figures make excellent chew toys...and ate my original Solo. Nonetheless, no matter what wierd head Kenner kept resculpting for him, he was still Han Solo...the coolest Corellian that ever lived. He had the vest, the attitude, and the fastest hunk of junk in the galaxy to back it all up.

Nowadays, if the figure isn't decked out like Friar Tuck wielding a laser sword, or a Clone Trooper of every possible hue of the color spectrum, its pretty much a bonafide pegwarmer. The VOTC Han Solo was---at the time---the best incarnation ever created of this character. He had super-articulation, he could sit in the Millenium Falcon's gunnery seat like it was made just for him, and the detailing on his clothing and holster belt was phenomenal...yet he didn't sell that well at all. Next, Hasbro upped the ante by releasing the VTSC Han Solo...making him better, if that was possible. This time around, he had a ball-socket torso, sleeves that reached all the way to his wrists, removable vest (to simulate the Carbon Freeze or Sarlaac scenes) and his removable camo duster from ROTJ. And still...the pegwarmers were Han, Greedo and Tusken Raider. It must have become painfully apparent to Hasbro that younger audiences (and in turn, collectors) just don't want more Han figures all that badly...if at all. This time around, Hasbro offers up a half-hearted stab at another vintage-style Han Solo figure...Han in Hoth Outfit.

Now I use the term "vintage" loosely here, because this figure is much, much closer to a basic figure than I have EVER seen...and may well become part of a basic assortment in the near future. I just find it a bit offsetting to look at this figure and know that Hasbro shipped it under the VTAC line (of course, they did the same thing with Leia, so I can't really be too surprised). Unlike the horrid Leia figure, it's evident that quite a bit of thought went into the sculpt. Han is somewhat super-articulated with 8 ball-socket joints (shoulders, elbows, knees and ankles) and straight-cut joint in the torso and hips. Swivel joints in the wrists round out the figure's overall posability. Like VOTC Obi-Wan, Han's head is not ball-socketed...but rather like the old-school Kenner figures where it only turns from side to side. The bottom portion of the cold-weather coat that he's wearing is molded in rubberized plastic that hangs down nearly to his knees. This bestows poor Han with the same curse that any given Imperial officer figure is afflicted with: the complete and total inability to sit down. Unless Hasbro rereleases the original 1980-style Tauntaun with the "trap door" on its back, there will be no riding for Captain Solo. I am uncertain why Hasbro decided to go with Han wearing an outfit from a scene that he was in no more than about 8 seconds for a vintage figure. The upcoming super-articulated Bespin Han with Torture Rack is what a lot of us were hoping for in the VTAC line...but this?!

Now don't get me wrong...I do like the figure, for what it is. But with a $10 price point, its sadly disappointing. I believe my biggest gripe about this figure is the shoddy paintjob on Han's head and accessories. Would you believe that most of them are handpainted? Yep, you read that right...handpainted, and not done very well either. The two headgear accessories are both missing bits of paint here and there, and the electrobinoculars are so shoddily painted that you can see rather large swaths of white paint on the inside of the leather strap and the viewfinders and lens look like they were painted by my 2 year old twins! The head itself is obviously machine-painted, but apparently the paint nozzles either needed cleaning the day this figure was manufactured, or the paint was running low. A good portion of Han's hair isn't even painted, leaving him with weird "highlights" all along the front of his hairline. And his eyes are so unevenly painted that they appear to be a bit cross-eyed. On the other hand, the body, legs and arms are nicely painted, with the paint app being very clean and precise. Um...okaaaay...makes perfect sense to me.

Han comes with quite a few accessories, but I also have a big problem with one of them. Or rather, I have a problem with one of them being big...TOO big. When I first saw pics of Han, I thought he would come with the scanner/tricorder-like device he used to send an SOS to Echo Base. But when I saw that its actually a pair of electrobinoculars, I almost wondered if they were supposed to be for some new 5" scale figures or something. The viewfinder eyepieces are so far apart that Han's entire face fits completely between them. And the angle of the carry strap is in such a way that it makes it impossible for a figure to hold them up to their face anyway. The headgear accessories are his pushed-back hood and a standard-issue Rebel Trooper hat/goggles/hari-krishna knot thingy (what are those for anyways?). But guess what? You can't put them both on at the same time without quite a bit of difficulty. You have to pop Han's head off, remove the hood accessory, pop the head back on, then put on the hat.

As a stand-alone figure that would be looked upon like an Unleashed figure, Han in Hoth Outfit is a good figure. As part of the ultra-prestigious Vintage line...he's an embarrassment. Not so much as perhaps Endor Leia or VOTC Threepio, but still doesn't come anywhere near where he COULD have been. I honestly get the impression here that Hasbro went into making this figure knowing full well that it was destined to be a pegwarmer, so not a lot of effort was put forth. Sad, really... I'm not saying to run for the hills, like I did with Endor Leia, but honestly, this figure is best suited to collectors who are either completionists or major Han Solo fans. Anyone else will most likely do as they have done with the first two vintage Hans...pass them by as thick layers of dust begin to form on their starcases...
I give VTAC Han in Hoth Outfit 3 Death Stars.
Image 1 of 5 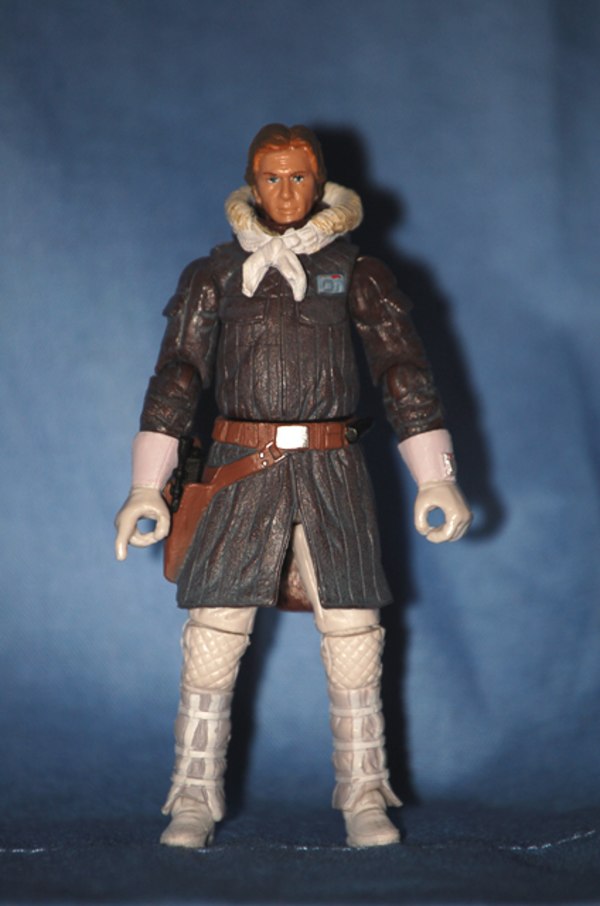 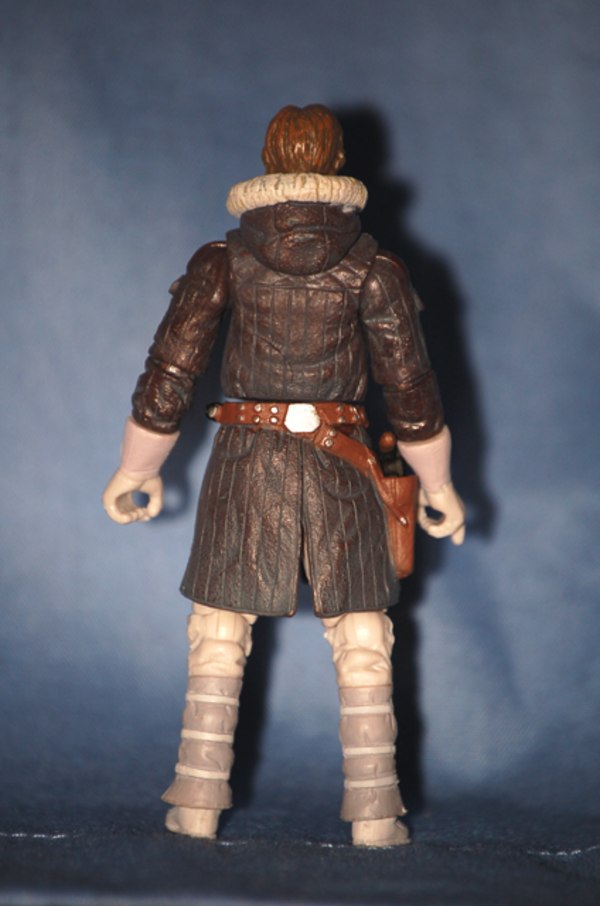 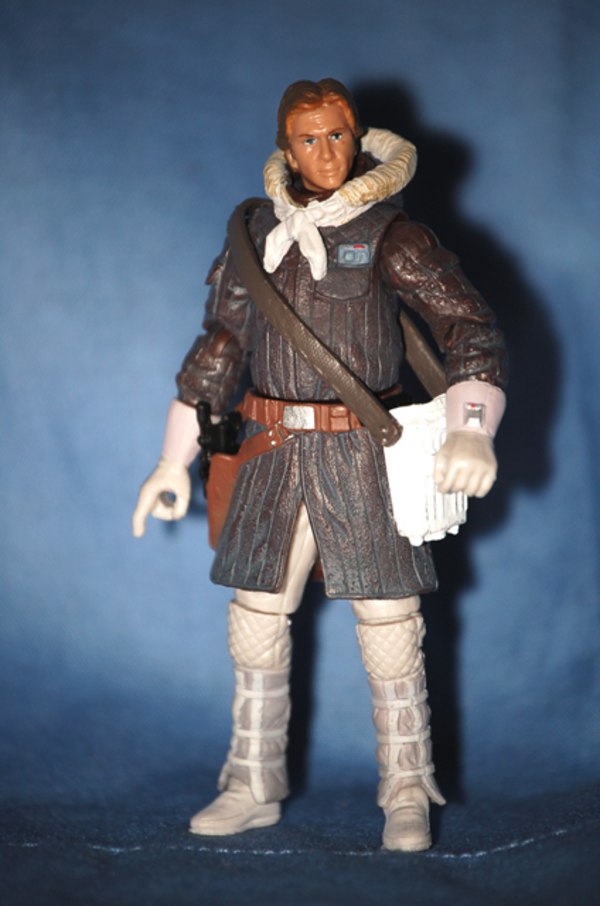 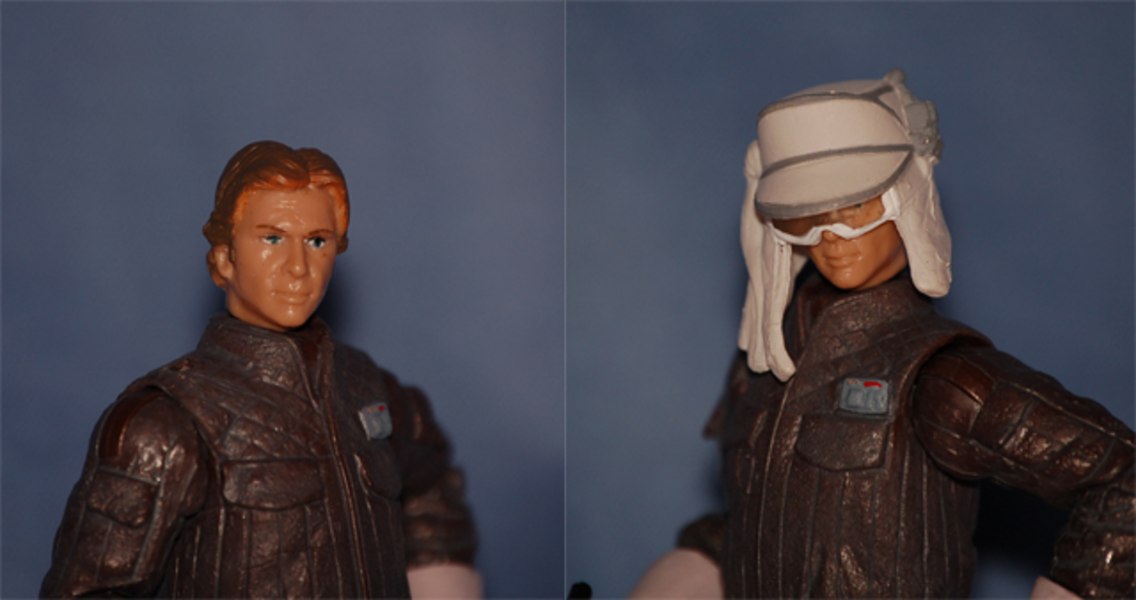 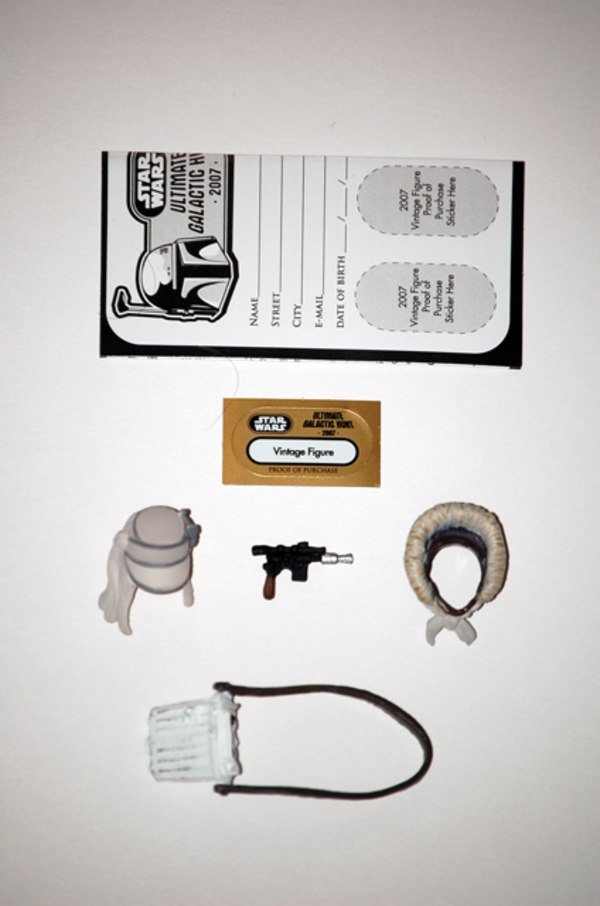 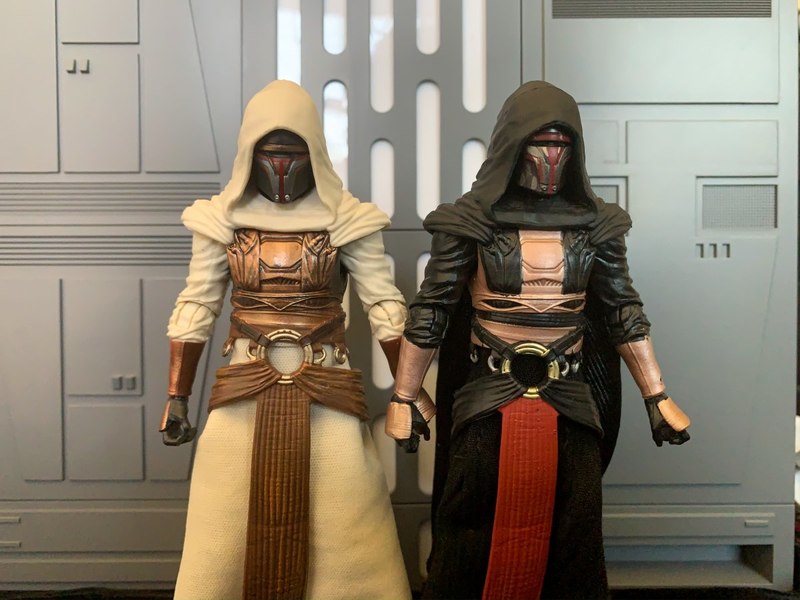