That's been pretty much the universal reaction of every Star Wars collector (and retailer) out there. Although I question Hasbro's decision to commit to a "rapid deployment" approach to the Anniversary Collection, I am but a lowly Toys R Us peon in the grand scheme of things. I'm not on Hasbro's payroll, so my opinions and observations matter very little. But that's neither here nor there. The fact is...Wave 2 is out already, and the "whys" and "hows" are inconsequential.

That aside, I will be reviewing one of the more sought-after figures of the TAC line's latest wave: The Death Star Trooper.

Thus far, it seems that Hasbro has been giving us quite a bit of super-articulated goodness in this new Star Wars line and the Death Star Trooper certainly doesn't disappoint. 9 ball-socket joints, 3 straight-cut joints, and swiveling wrist joints give the figure an unprecedented range of posability. I had not expected a figure that is the Imperial equivalent of a security guard to be this posable, although some of the joints are a tad on the loose side. Despite the loose joints, this is the body mold I wish past Imperial officers could have been made with, instead of the angle-jointed elbows and unbendable knees of Tarkin, Veers, Ozzel and practically every figure that was included with the Imperial Conference Room set. I would almost say that the DS Trooper is Vintage series quality. This figure does share the same Imperial curse that past figures suffer from: the inability to sit down due to the low-hanging tunic. It also shares a few design similarities with the Death Star Gunner, the most obvious being the holster molded to the right hip into which an E-11 Blaster Rifle fits backward (with the handgrip facing forward). The uniforms of both figures also share an odd cross-hatching design on the torso.

The color scheme on the DS Trooper is also similar to that of the DS Gunner. This figure is based on the ROTJ style black uniform, rather than the ANH/ESB style grey uniform, even though the character photos on the front and back of the figure card clearly shows grey-uniformed Troopers. Overall, there isn't much of a paint app, considering that the entire figure is molded in black, with the exception of the belt buckle, neck and head. I did notice that the fleshtone of the neck was a slightly different color than the head itself, but this isn't a major deal IMHO. And for the first time, Hasbro actually weathered the E-11 by adding smatterings of silver across the barrel, to give it a very "used" look. The removable helmet is a nice shiny black and fits snugly under the figure's chin. Without the helmet, he sports a VERY 70's hairstyle complete with comb-over. This was a nice touch, considering that the DS Trooper was one of the original 12 1978 Kenner figures. Its the small things like this that show that Hasbro is taking great care in doing the 30th anniversary of Star Wars right as far as its action figures are concerned.

The Death Star Trooper is pretty bare-bones where accessories are concerned, but really, what else does he really need? The figure comes with:

With the exception of only a tiny few, I'm finding the Anniversary Collection to be more and more impressive with each wave. The DS Trooper is high-grade army builder material and will probably be one of those figures that are nearly impossible to find, unfortunately. So he can't sit properly and his elbow joints are a little too loose...does this make it a bad figure? Absolutely not. I plan to buy a few multiples of this figure myself---provided that I can get ahold of a few more!
Image 1 of 5 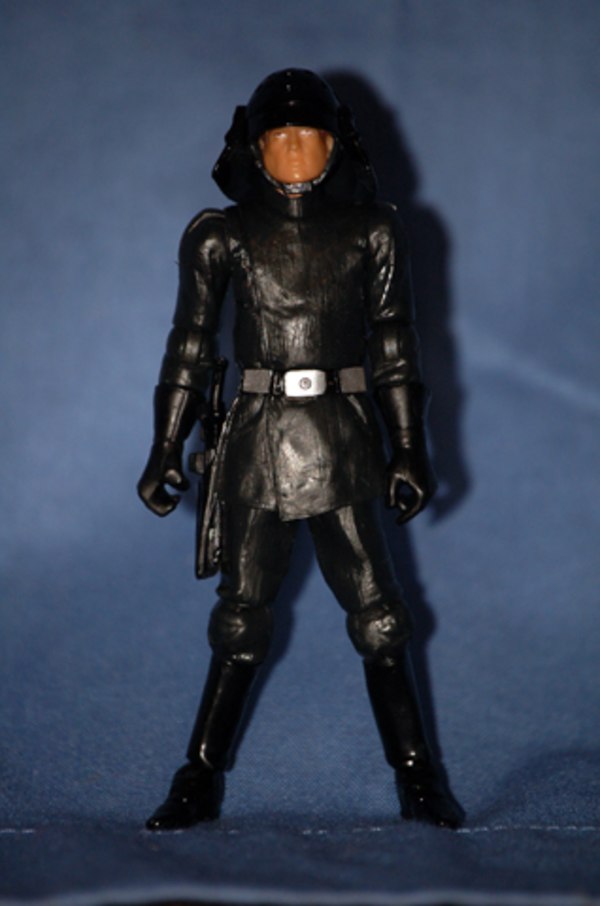 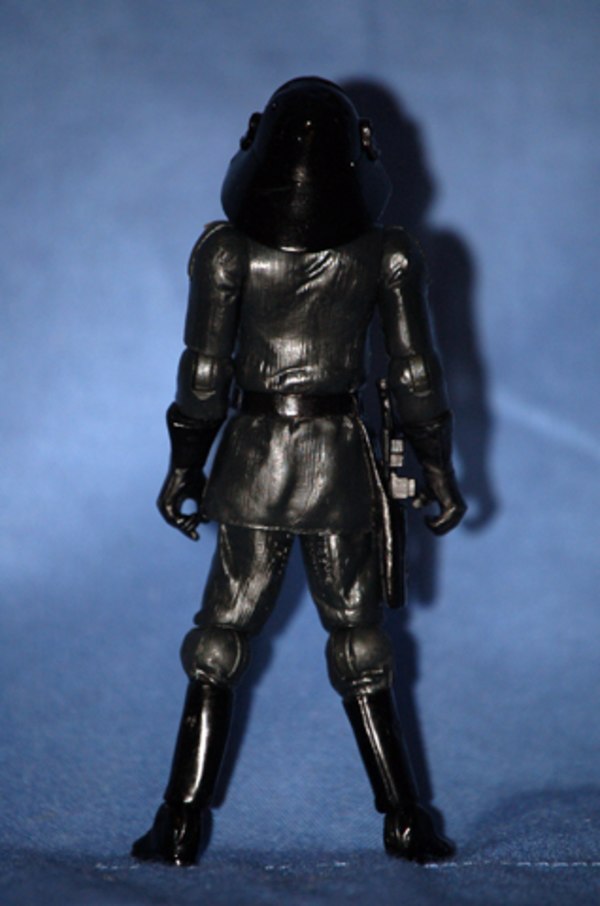 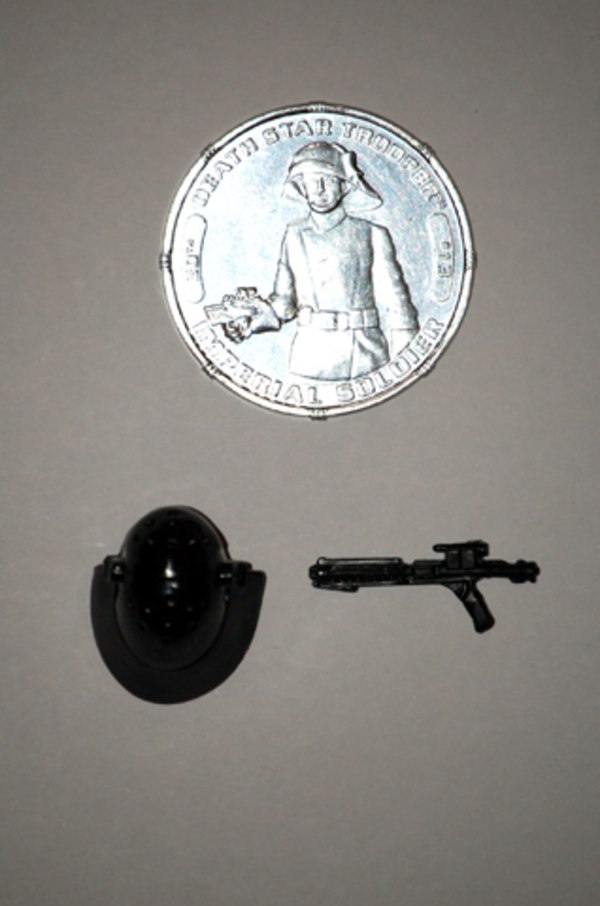 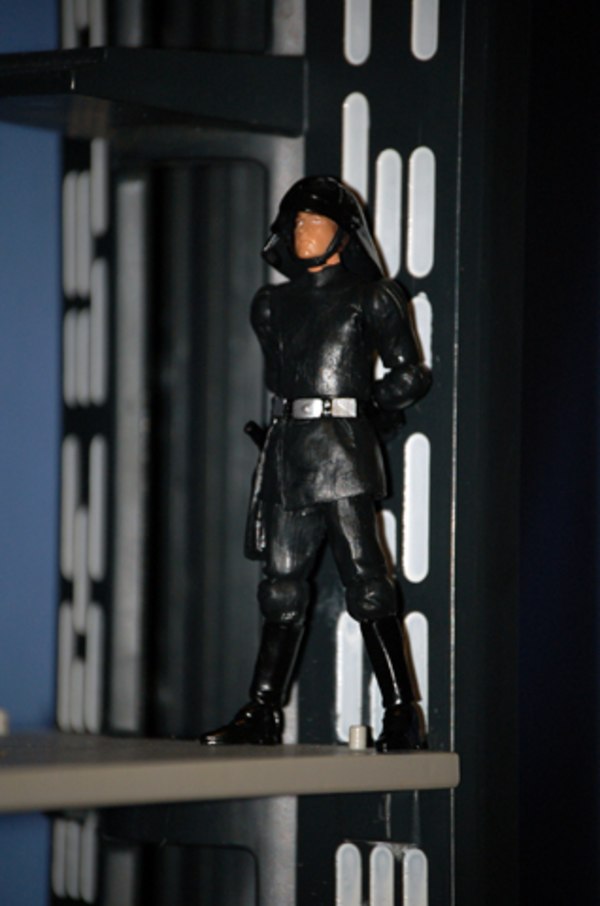 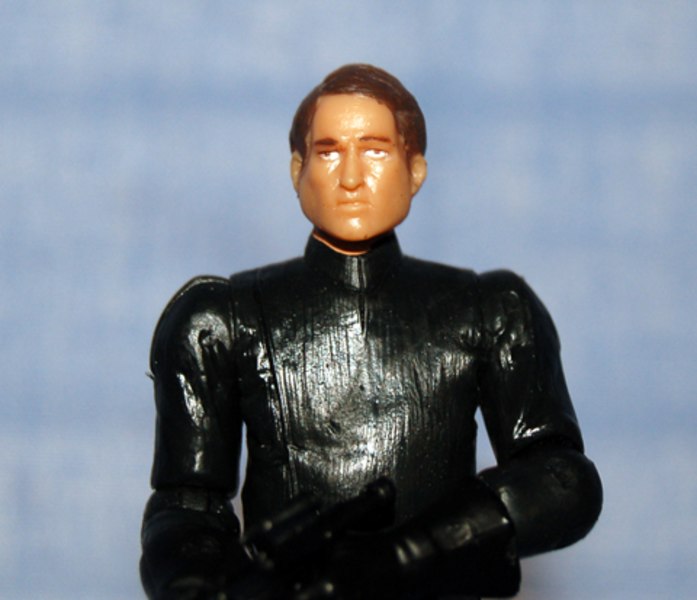