Well folks, I said this review would be a doozy...and it is! So much so, that I'm posting this one in three parts due to the number of photos I shot. So here we go with Part I:

Since September of last year, the Endor All Terrain Armored Transport has been one of those TRU Exclusives that many have wanted, but few are willing to plunk down the excessive cash for...and now that they are back in TRU stores with an increased price point of $99.99 (up $10 from $89.99), it may sour even more people on the idea. But purchase it I did...and much to my delight, it's a completely overpriced and unneccessary thing of beauty. The AT-AT was one of the big-ticket Star Wars vehicles I never owned as a kid, so I'm totally doing the reliving-my-childhood thing with it.

This is a rerelease of the POTF2 AT-AT from a decade ago, with pretty much the same electronics setup. It stands a full 17.5" tall on four fully posable legs. Each leg pivots at the "hip," kneejoint, and ankle---allowing for fairly realistic stances...as realistic as a fantasy-based walker vehicle can be, that is. I'm certain that many people already own the AT-AT in one form or another, so this may be old news your demographic. But for those who do not have one in their collections, or are interested in seeing this new incarnation up close and personal, it is sure to impress...

Right out of the box, the most striking difference between this AT-AT and the classic "Blizzard Force" walker is the new paint app. The overall color of the armored hull is more of an off-white instead of the familiar Imperial bluish-grey color. Hasbro did a really nice job weathering the hull with streaks running the length of the armor underneath various ports and greeblies, but also went a tad overboard in "making it one with nature" too. The main body has several rather large green splotches on it...apparently representing moss or fungi, but the process in which it was applied makes it appear that it was painted rather haphazardly. The feet and lower legs are absolutely covered in heavy "mud" splatters. I don't seem to remember AT-ATs having the ability to go mud boggin', but obviously they can! The problem with this approach to "terrestrializing" a vehicle is that it can look like different things to different people. My wife looked at it and asked why it looked like it had er...ahem..."bantha poodoo" all over the feet. Now everytime I look at it, I can't get that image out of my head! Thanks, dear...really. And unlike the old 1980 AT-AT, the red "viewport" at the front of the head is a tampo-stamped paint app instead of a decal.

Aside from being posable, the AT-AT has a ton of features inside and out. Let's start with the head, shall we? The side cannons are a staple of modern Star Wars vehicles: the spring-loaded missile launcher disguised as a blaster cannon. Each side cannon fires a missile by pressing a small stud underneath the cannon near the rear of it. The "chin cannons" are activated by moving a slider switch back and forth and light up with a small red LED in each one, along with the accompanying movie-accurate sound effects. The cockpit interior is accessed by simply raising the top "hatch." It is a rather cramped affair, with just enough room for two AT-AT Drivers, but once placed inside, they look right at home.

The main body's interior is accessed via a swing-down panel on the walker's left side. Inside is the heart of the AT-AT's many electronic features. A large free-standing computer terminal dominates a good portion of the troop/cargo compartment...and is the same exact one that was added to the 1997 version. This terminal is where 3 AA batteries are installed. The two monitors that adorn the top portion of the terminal show two scenes from the Battle of Endor and light up when one of the three sound-effect buttons at the foot of it are pressed. The terminal's speaker is molded to resemble the Imperial insignia...and was a nice touch indeed.

The sound effects are as follows:

At the front of the troop compartment is the neck and control yoke mechanism. It is a slightly stripped-down version of the original 1980 controller, but is still very complex and just downright cool! The neck itself moves side-to-side in about a 35 degree arc, and pushing in on the controller elevates the head up and down in about the same degree of angle. With a bit of practice, the head seems to literally come to life in its range of movement. In effect, the AT-AT is 33% vehicle, 33% playset and 33% puppet. Kenner knew what it was doing in developing this baby back in the day...

In spite of all the electronic stuff that's been stuffed into these newer versions of the Imperial Walker, its still amazingly roomy inside. There are footpegs for 6 figures...whereas the original had room for 8. Losing two footpegs isn't too shabby IMHO...

Like the 1997 version, the Endor AT-AT comes packaged with two figures. The 2005 TSC AT-AT Driver and the 2000 Biker Scout with the much-anticipated, much-modified removable faceplate. The AT-AT Driver is the nicest version of this figure that has ever been made. Highly posable for a figure that just sits down and pilots things all time. The paint app is clean, crisp and is in nearly flawless condition. The Biker Scout is a tad on the "blah" side with the exception of the faceplate gimmick. I freely admit I've been spoiled by the VTSC version of this figure...and would have preferred seeing this one packaged in instead of the one the walker ended up getting. Articulation is standard fare for the pre-angle-cut/ball-socket joint era. Not much to write home about in this area. The paint app is like the AT-AT Driver in the respect of being very neat and clean.

Over all, the Endor AT-AT isn't exactly a bargain-basement purchase...but if you can wrangle one of these, you won't regret doing so. The only minor gripe I have is the sloppy "moss" paint spatters. Besides that, its almost considered a cornerstone in any fan's collection. If you already own one version or another, then I can fully understand if you pass on this one, though. In my case...I believe General Veers said it best: "Yes Lord Vader. His wallet's shields will be down momentarily. You may start your landing."
Image 1 of 12 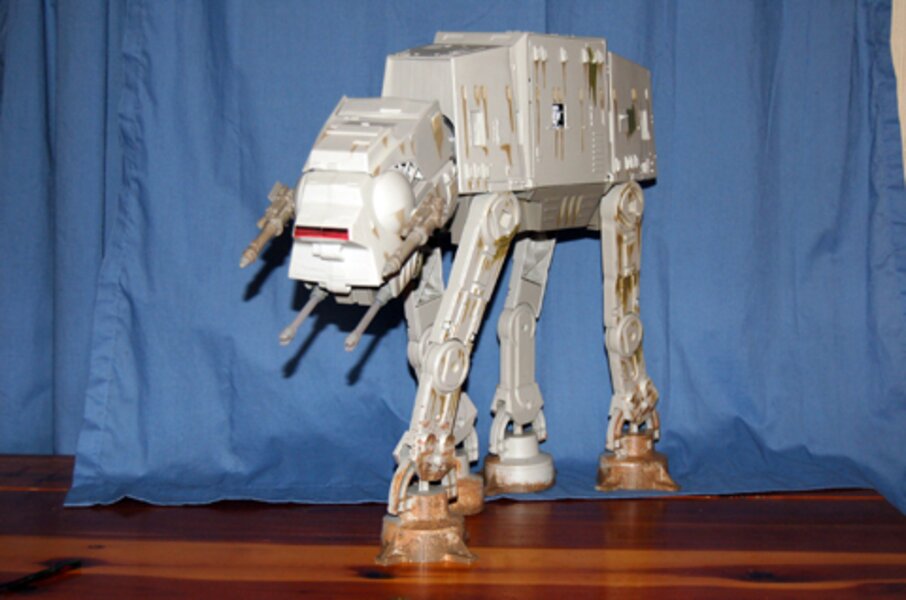 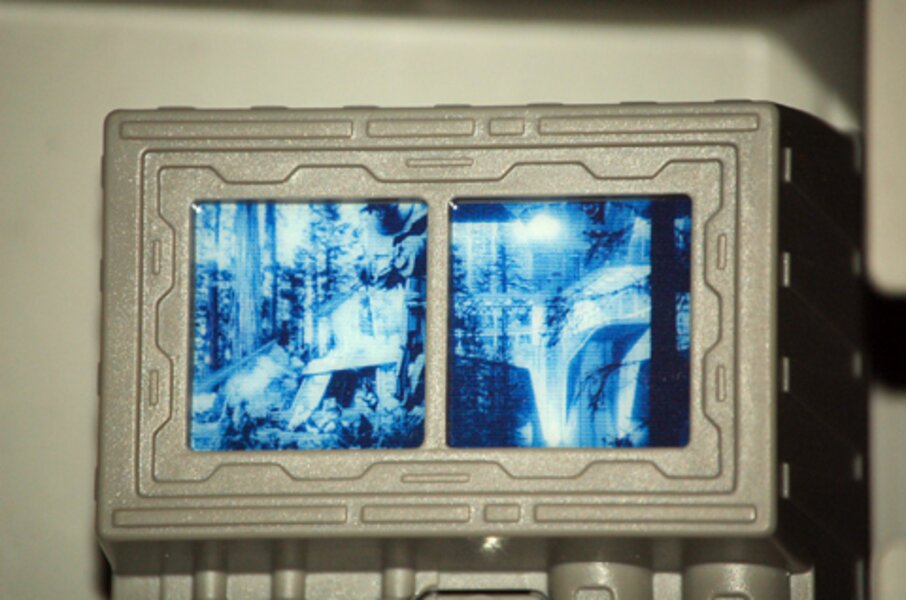 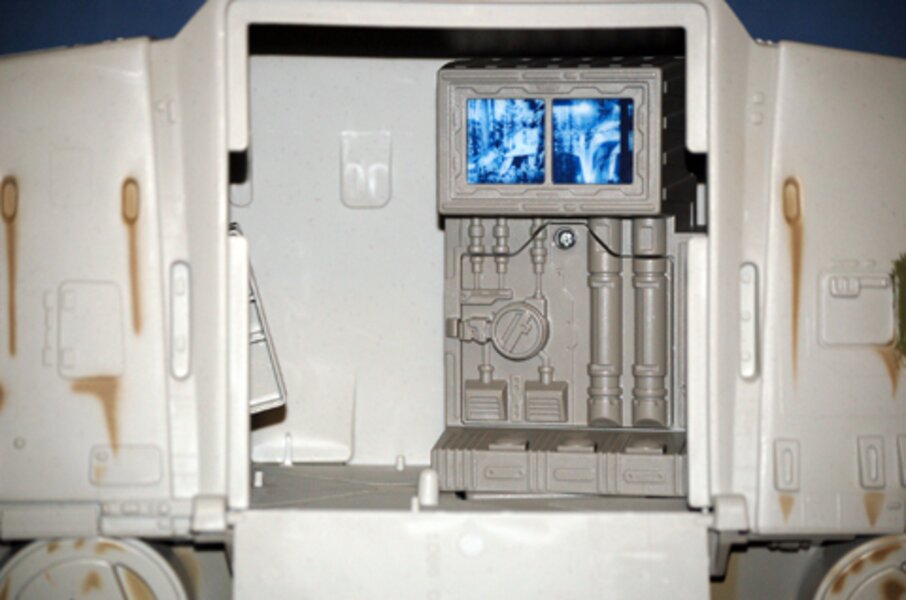 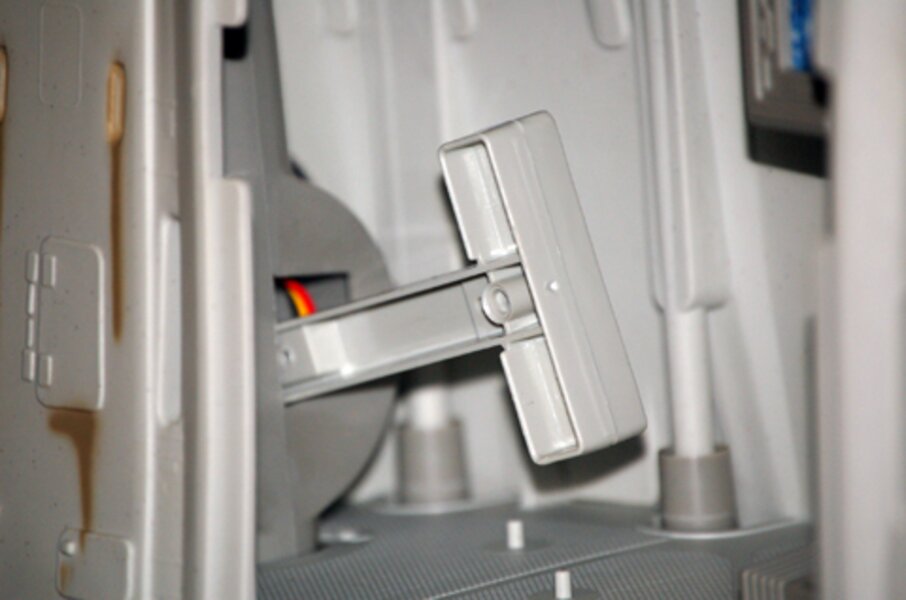 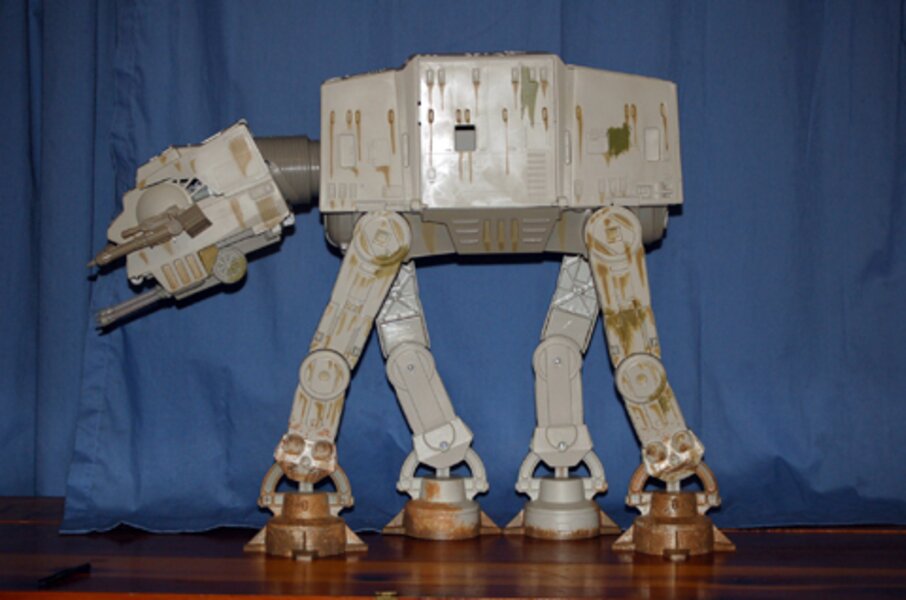 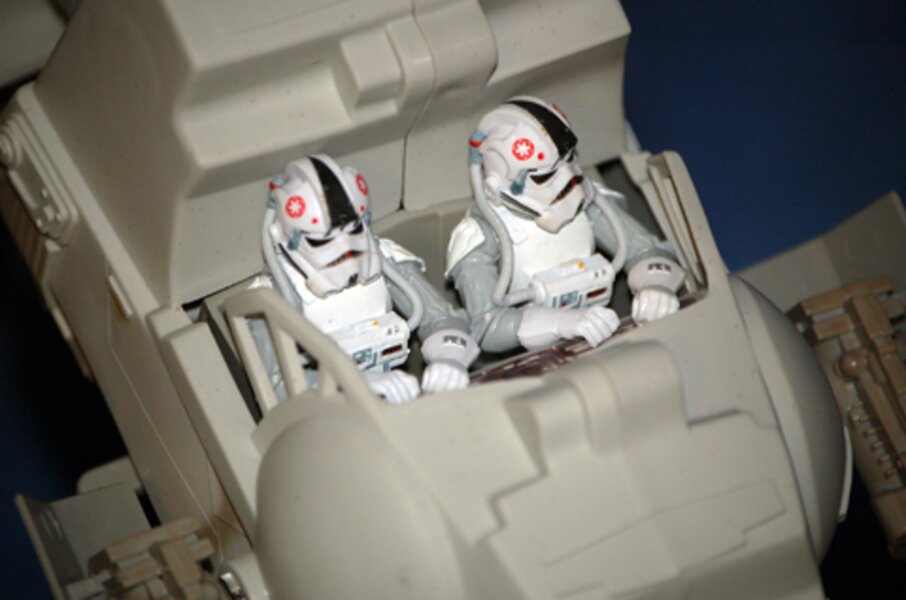 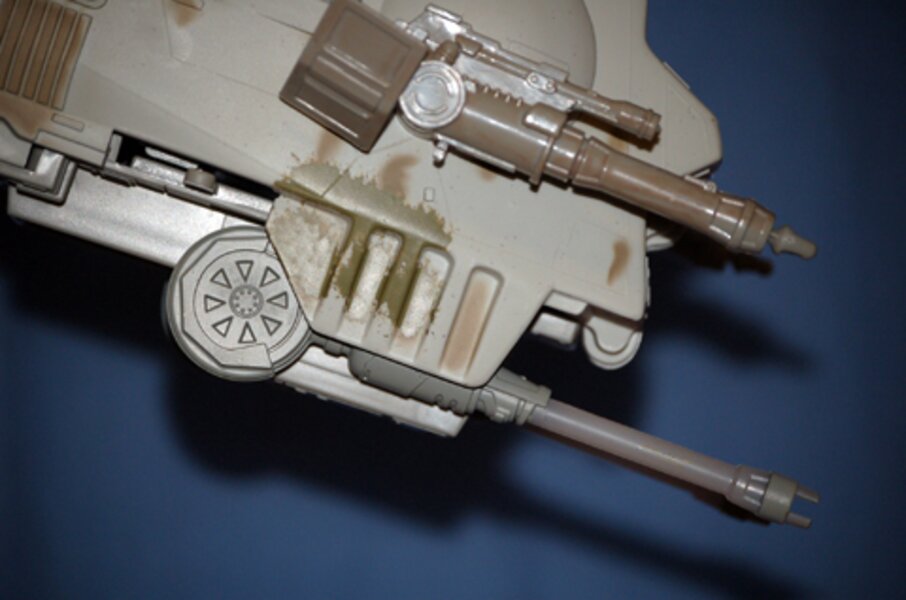 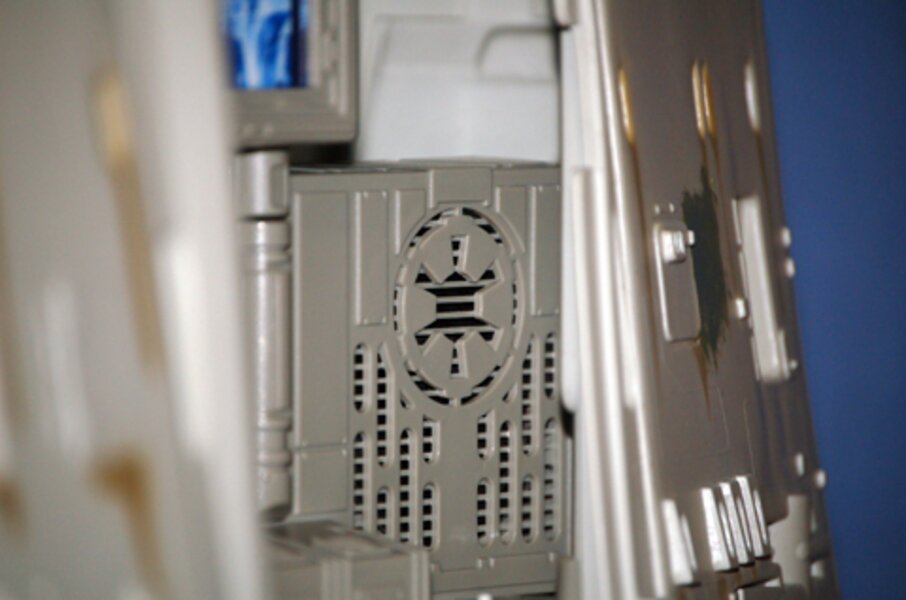 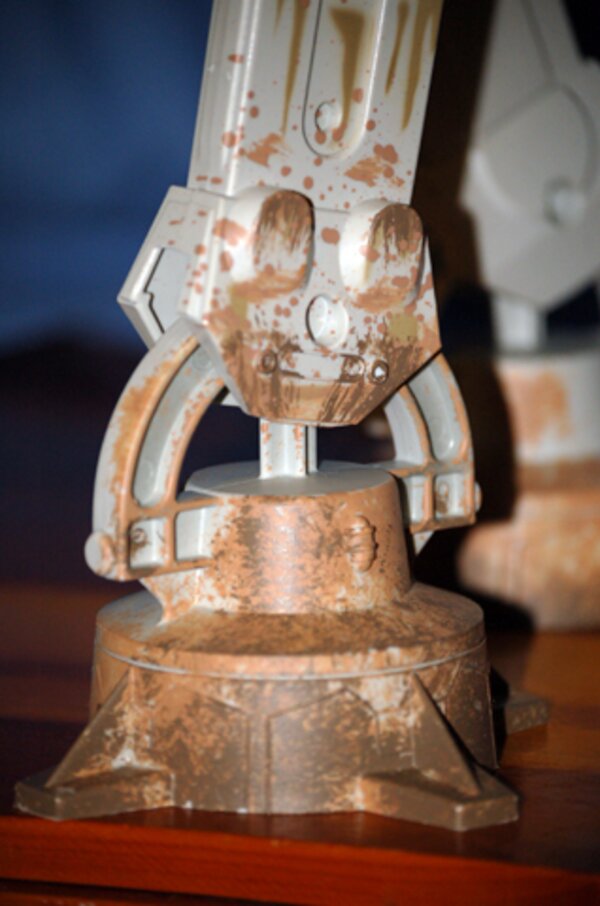 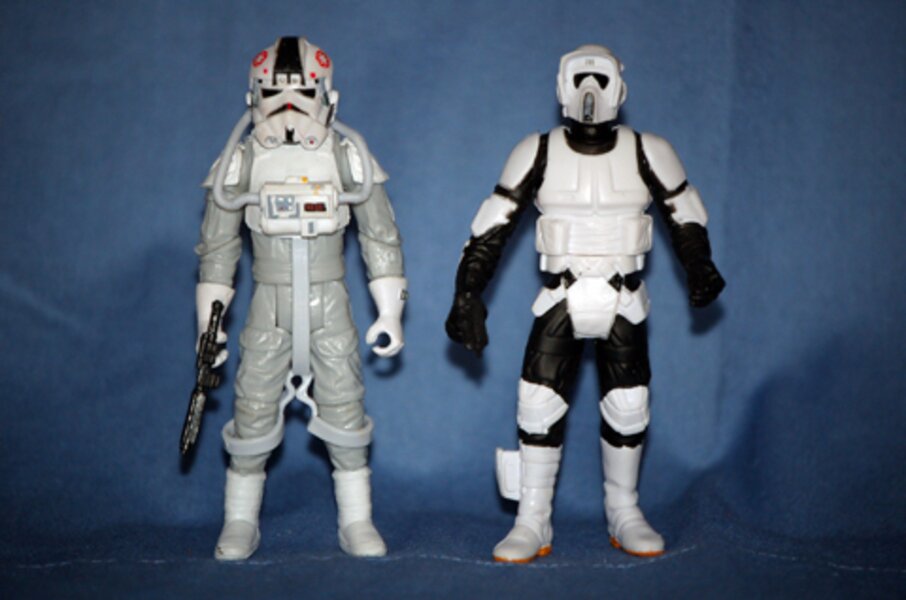 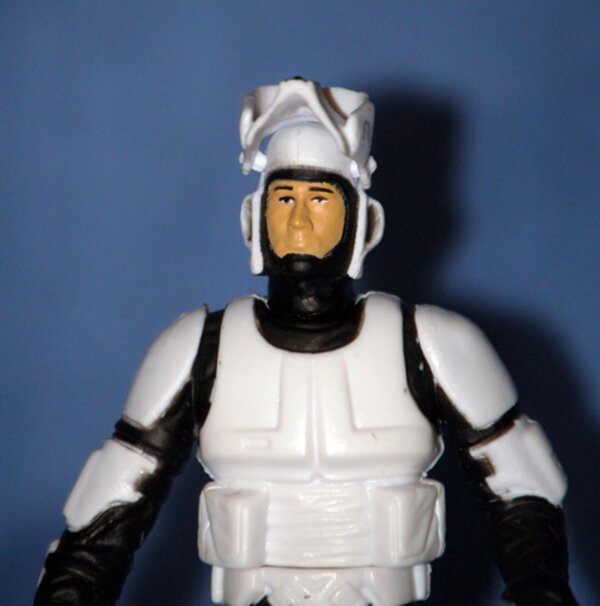 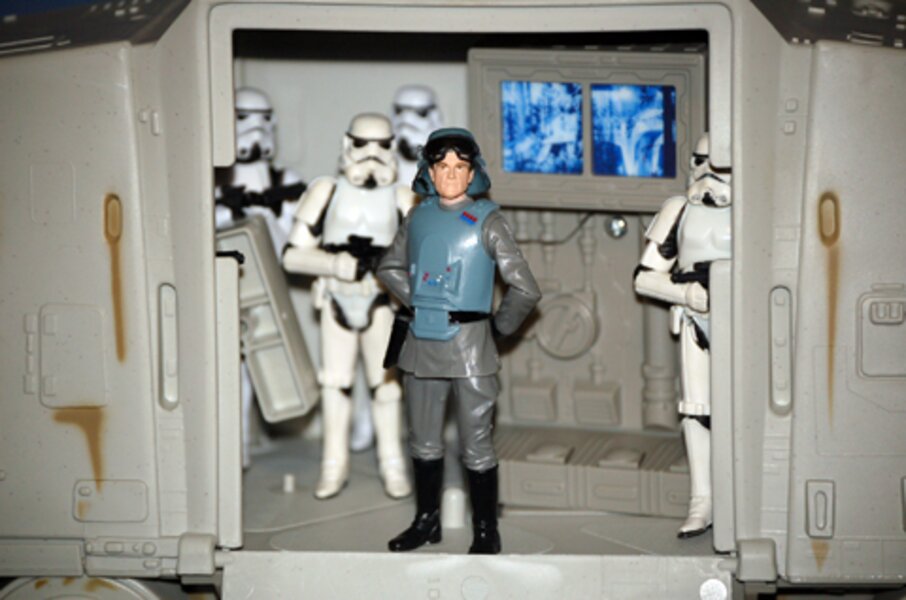