And thus begins today's review of the Anniversary Collection's Han Solo. Our surly anti-hero-with-a-heart-of-gold is back in a form which we've rarely seen him before...in his gunnery well comlink and pilot's gloves. The last attempt at this particular scene-specific figure was WAAAAAY back in 1997, with two interlocking gunnery wells that featured a steroid-pumped Han (minus gloves) and Luke. Those were possibly two of the worst looking figures ever made, though the idea was sound. It was this space combat scene that inspired possibly every sit-down coin-op arcade game in history. Star Wars a pop-culture phenomenon indeed...

"Gunnery Well Han" is a kitbashed VOTC Han Solo figure with a few changes here and there. The same VOTC torso, holster, and upper legs are used, while new arms, lower legs and a slightly modified VOTC head have been added. The figure features 5 ball-socket joints (neck, shoulders and knees), 2 angle-cut joints in the elbows, and two straight-cut joints in the hips. This gives a figure that otherwise would simply sit down all the time, a lot of versatility. Besides the changes already mentioned, the ball-socketed ankles are no longer present. Instead, the ankle/foot on each leg is molded in a permanent 90 degree angle.

The comlink appears to be super-glued to the right side of Han's head, as I could not remove it to get a complete accessories photo...but its thin rubbery construction kept me from trying to wrench the heck out of it. However, the other end of it plugs neatly into the back buckle of Han's holster belt, and IS removable. Is this were it went in ANH? No one really knows because we don't quite see where the terminus of the comlink is in the fast-paced combat scenes, except that the wire runs down past Han's waist.

The paint app is pretty much vintage ANH-era Han Solo. Black vest, dirty white shirt, blue spacer's pants with red Corellian bloodstripes, and brown holster belt. This version of Captain Solo suffers from the exact same problem that the VOTC version had: sloppy black paint along the seam where the vest and undershirt meet. It's not horrible, but I was a bit surprised that the folks at Hasbro had not addressed this somehow. And perhaps it was just my particular figure that got the few spots of misplaced paint. Who knows. All in all, though...everything else is nicely painted, especially the gloves.

As mentioned earlier, Han's comlink is permanently attached to his head, so I couldn't remove it to get a shot of all of the accessories. So that leaves only his blaster and the coin for the photo. Either way, he doesn't come with very much in the way of accessories...

Han Solo comes with the following:

Han Solo, being one of the core characters in the Star Wars mythos, is cursed with being one of the most overly-produced action figures. But its amazing how a few added accents can make a potential yawn-fest into something exciting. Anyone who has a Millenium Falcon will find that this incarnation of Solo will be right at home in the gunnery chair or behind the controls in the cockpit. Now he can tell Luke to blow the Death Star and go home (okay, out of context that just sounds dirty, but you all get the point I'm making here!). Like TAC R2-D2, this figure is a tad too scene-specific to be used in any other environment, but that really doesn't bother me as much as R2 did. And unfortunately, it is this same specialization that may make him a potential pegwarmer for those who do not own the Falcon or one of the aforementioned gunnery well playsets. Only time will tell...
Image 1 of 5 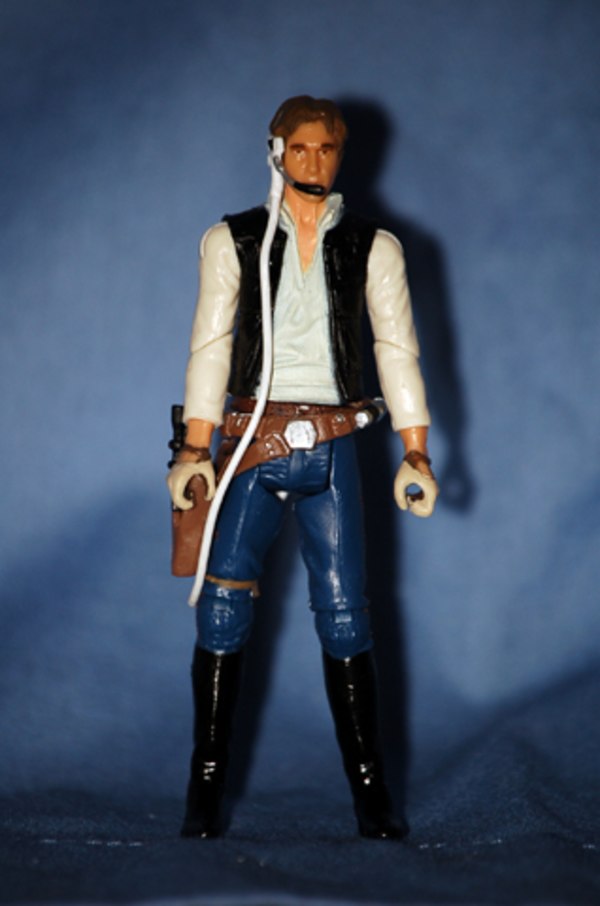 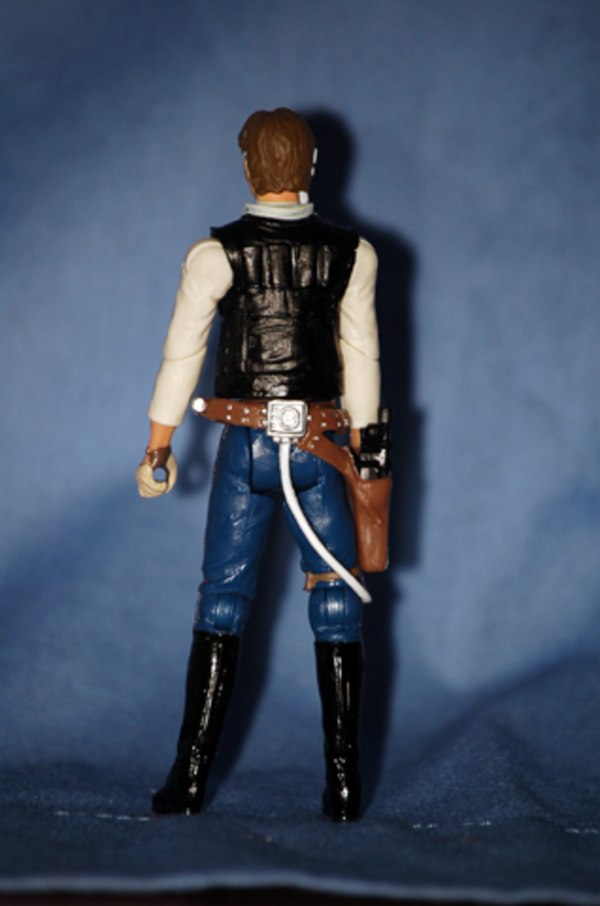 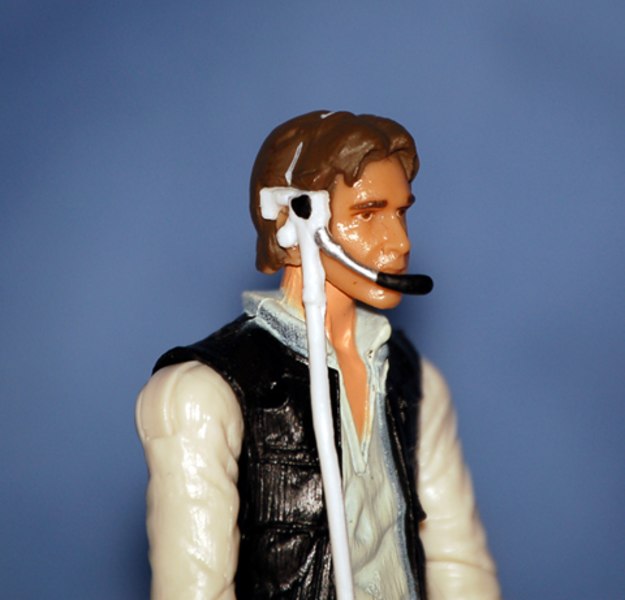 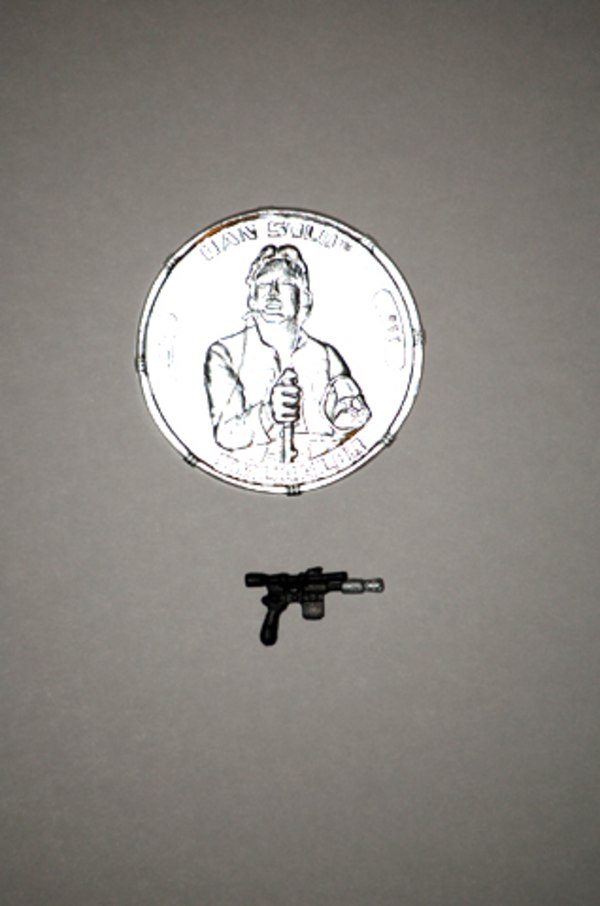 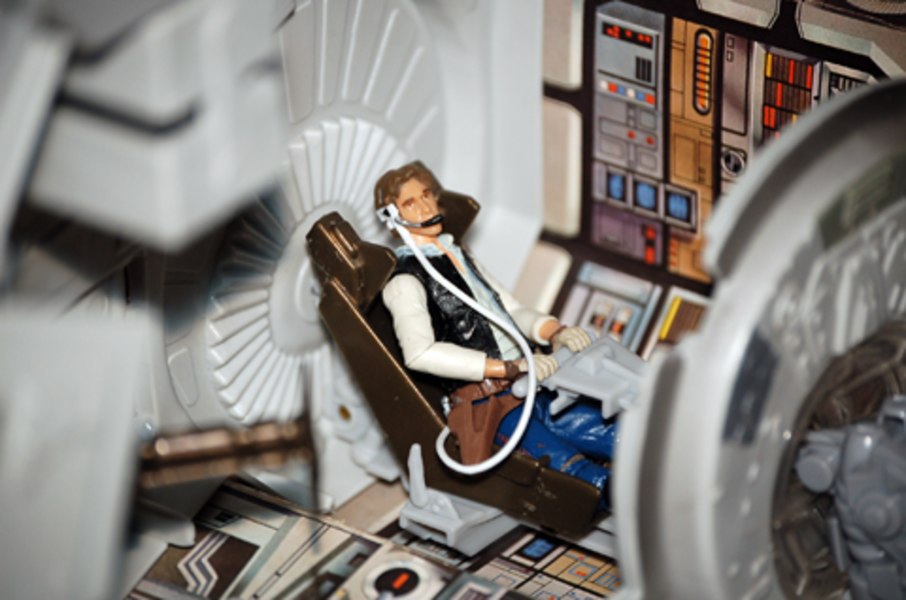