Although I snapped up most of Wave 2 earlier this week, I'm attempting to space the reviews out to one per day so that you all have time to peruse what I've already posted. Today's review was a treat for me to do, as it will be a treat for many, and a source of frustration for some. I give you the Holy Grail of Wave 2...the McQuarrie Boba Fett. Yes...the very figure that so many collectors are scrambling to get their mitts on and which customizers see as a blank canvas for an entire rainbow of Mandalorian Supercommando squads.

I suppose there ARE some perks to working for a toy store.

Those of you who have not been fortunate enough to find him yet will be pleasantly surprised to know that this figure is indeed super-articulated much like the VTOC Boba Fett...but with a few minor exceptions. Ball-socket joints are in the head, shoulders, elbows, and knees; while swivel joints are in the waist and torso, and two straight-cut joints are in the hips. This combination gives Concept Fett quite a range of posability. Curiously, the ankles were left in a static flat-footed position, but doesn't seem to impede many of the "extreme action" poses I put the figure through.

One of the first things you will notice about the figure is the fact that it comes with two different helmets. Sorry folks, Temuera Morrison's ugly mug is not underneath. This Boba is more or less like the VTOC/Evolutions/TSC Stormtrooper in the respect that the helmets simply snap onto a fairly large ball-socket bubble. The first helmet is very much like the one worn in ESB/ROTJ, except that it is completely white with a black visor, tiny red triangle on the forehead and a small gold pinstripe around the back of it. Also, the rangefinder is slightly larger than its film counterpart. The second helmet is of a decidedly skeletal design, probably intended to give Boba Fett a scary visage. Unknown to many of you, this is the helmet design that the Airborne Trooper helmet was based off of some 25 years later in ROTS. Don't believe me? Hold the two helmets side-by-side and you'll see I speak the truth. You didn't think the guys at ILM just pulled that design out of their butts, did ya? The rangefinder on the second helmet is placed on the right side instead of the left, like on the first helmet. It is also facing outward, away from the head instead of inward toward it.

One of the more interesting and unrevealed features that Concept Fett has is an opening "gut gun" in the torso armor. The bottom panel of the armor opens outward to reveal a small blaster barrel. The inner workings of the blaster seem to go too far into the actual body to simply be incorporated into the armor itself. Rather, perhaps Ralph McQuarrie originally envisioned Fett to be "more machine than man" like Vader. Whatever the reason, its a nifty addition to an already ultra-cool figure. Too bad things like this were never added to the Boba Fett we've all come to know and love...

Concept Fett comes with a plethora of accessories that make him just different enough from either Boba or Jango to allow self-proclaimed customizers to really go wild in making their own Mandalorian warrior or bounty hunter (a Jastor Mereel custom does come to mind). Concept Fett has a hole in the back much like his VOTC counterpart, in which a backpack fits via a peg. The backpack is not the familiar Boba/Jango jetpack setup. Instead, it appears to be very similar in design to the ones worn by the Rebel Troopers on Hoth with a stub-nosed gatling-style rocket launcher set off to one side. Obviously, this is where the single centered rocket/missile launcher evolved for Fett's jetpack. Concept Fett's blaster is something that all Boba Fett fans have been waiting for...its not Boba's trusty EE-3 carbine, but the small pistol-like blaster with long stock that has been seen being held in several production stills, but never seen on film. I was wondering when (if ever) we'd see this particular version of Fett's weapon. And it fits snugly into a gleaming white holster on his hip. The final accessory is a clear orange firestream. Although we've seen this particular accessory with several past incarnations of Boba Fett, this one sets itself apart by the bottom 1/3 of it being molded to resemble an extended flamethrower barrel.

Accessories include the following:

The paint app is an odd mixture of white and light ghost grey with gold detailing. There are minute spots of red, blue and black across the figure as well to flesh it out. The right shoulder armor plating has a black Mandalorian unit insignia that resembles the product logo of a very popular vodka which I won't mention here because of copyright infringements and such. Everything is clean and crisp on the figure, with no paint smudges or production mistakes that I can see.

I gotta tell you all...whoever Hasbro got to oversee the production rollout of the 30th Anniversary Collection deserves a raise! Past waves have been hit-or-miss with what seemed like endless rereleases or repaints. But the TAC line is as fresh as it gets. So many updated and completely new figures and vehicles are coming down the pipe that it makes me consider dusting off my hardcore collector hat and write a suicide note for my wallet. Concept Fett is the first original McQuarrie figure we've gotten since the 2003 Stormtrooper, and it doesn't disappoint at all. Whether or not you would consider this figure an army builder or not is up to the individual collector, but be prepared to search far and away to find multiples.
Image 1 of 4 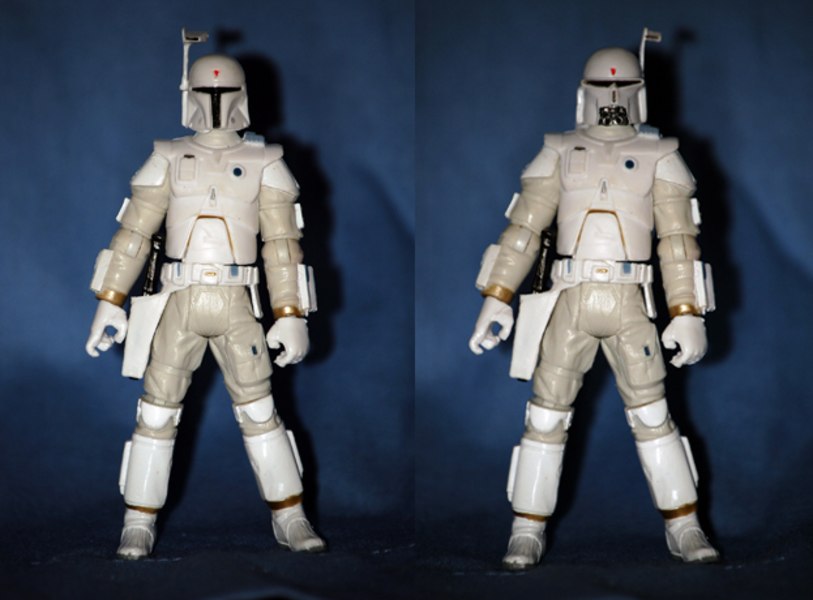 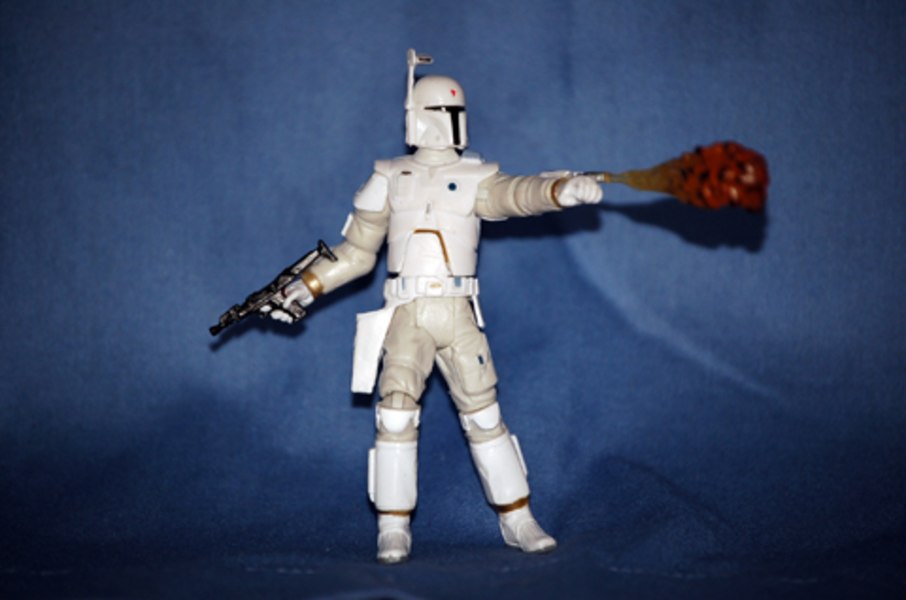 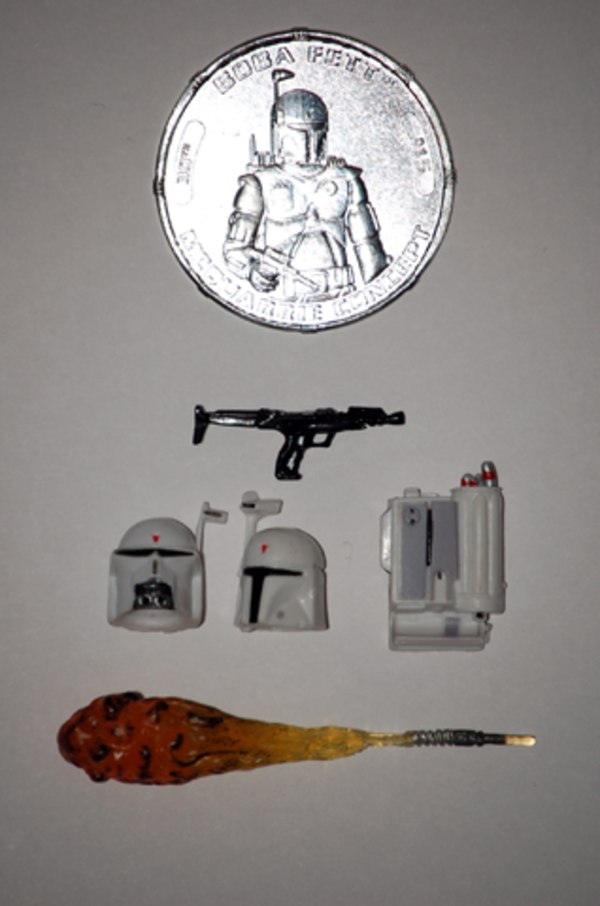 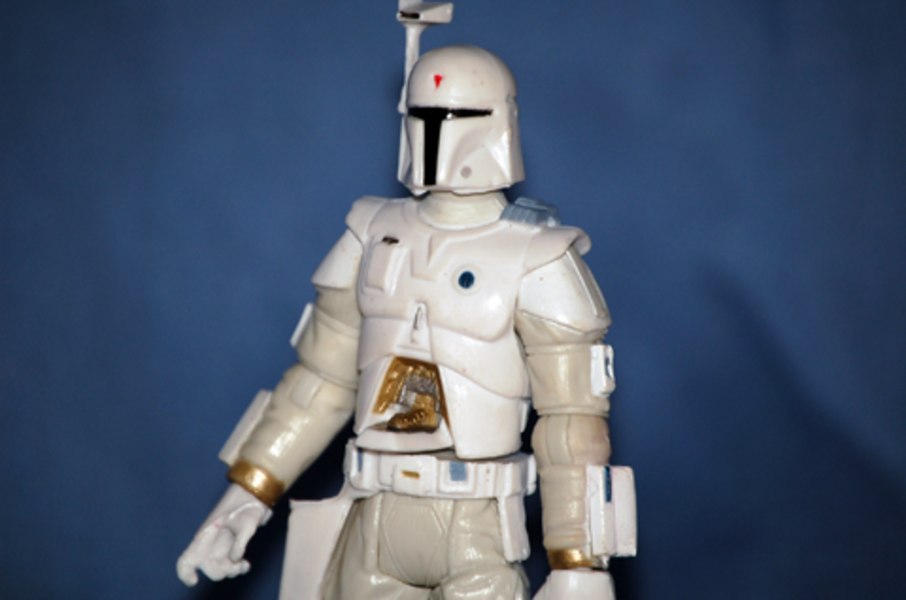