Bespin refugee - April 09, 2007
Ralph McQuarrie is argueably the one single person who gave the worlds of Star Wars that certain "look" or "feel" that sets our favorite space opera apart from other genres such as Star Trek. And it was he who was also able to give George Lucas a visual springboard on which to sell his idea to Twentieth Century Fox. In short, without Mr. McQuarrie, Star Wars simply would not have become the pop cultural phenomenon that it has become. As part of the 30th Anniversary Collection, Lucasfilm and Hasbro have collaborated to share with us examples of this talented artist's work in the form of "concept" action figures. An idea that I think is wonderful...

The Concept Stormtrooper has actually been around for a number of years, originally debuting in late 2002/early 2003 as a Star Wars Insider mail-away offer. This is not a brand new sculpt, though rumors have been flying all over the internet about whether Hasbro shelled out the dough to commission all new super-articulated versions to fall in line with the majority of the TAC figures. Though this is merely a repaint/reissue of an older-style figure, it actually IS a nice collector's piece.

Articulation is lacking, compared to many of the newer figures that we've become accustomed to (read: spoiled wink.gif). There are only two ball-socket joints incorporated into the figure, and those are located in each shoulder. The rest of the figure's joints are the standard straight-cut "swivel" variety, making the concept Stormie closer to the old Kenner-style figures than the modern Hasbro ilk. The head, , elbows, torso and legs are the only points that are articulated, while the knees are fixed into a standing position. Both arms are bent at the elbows, allowing for a limited range of poses, but are perfect for the placement of the included accessories (more on those later).

The paint app is beautifully done, and was the winning point of this figure for me. The grey bodysuit underneath the white armor is painted neatly with very few mistakes visible. In many places, the "seams" between various armor plating is filled in with very crisp grey lines. Even the gloves are painstakingly detailed in the same way. One thing that I was surprised to see was that the blaster rifle was also given a three-color paint scheme that is just as clean and crisp as the figure itself. The blast shield accessory (which snaps onto the forearm armor or onto the "thermal detonator" on the back of the belt Mobile Suit Gundam style) is done in a silvery-grey finish with white detailing, but also has several carbon-scored "blast points" across its surface. This makes it appear that the shield is actually used in combat rather than just being a ceremonial item. What's interesting about the belt is that it more closely resembles the Clone Trooper belt than that of the Stormtrooper. Small energy clips or storage compartments line the belt, much like what we find on any given Republic-era clone. What sets this belt aside from the modern Stormie belt is the ginormous holster hanging off of the left hip. You could easy park a Chevy Suburban in this thing and still have room to spare! blink.gif It is cumbersome and impedes the movement of the figure's arm a bit, but the blaster rifle does indeed fit snugly inside. And of course there is the matter of the lightsaber...

Originally, a very early draft of the script had practically everyone and their brother wielding a "laser sword" and a blaster as standard personal items, much the same way that we consider cellphones and iPods. Hence, Stormtroopers with lightsabers. Granted, this idea would have made the Oldbi-Wan/Darth Vader duel a lot more exciting if the Stormtroopers guarding the Falcon suddenly ignited their sabers to go help their Dark Lord...but I digress. This is the same lightsaber that is packed with the Quemarian Jedi in the final wave of the TSC line.

Accessories for the Concept Stormtrooper are a scant three items:

Under different circumstances, I would give figures like this a ho-hum score, citing the lack of articulation and odd angles of the limbs that limit posability to a very narrow bandwidth. But this is the first of a series of "tribute figures" that were not really meant to be army builders or fit anywhere in the established SW universe. Although I COULD see this being tied in as the next step between the ROTS era clone armor and the modern Stormtrooper armor. This is one of the near-impossible-to-find figures of the TAC line, so if you luck up on one, don't hesitate to add it to your collection.

I give the McQuarrie Concept Stormtrooper 4 Death Stars.
Image 1 of 5 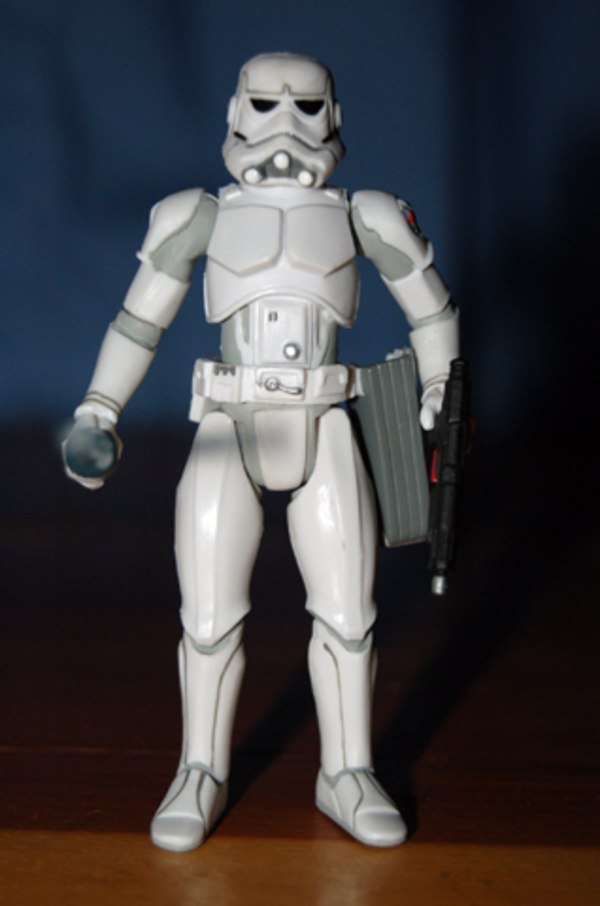 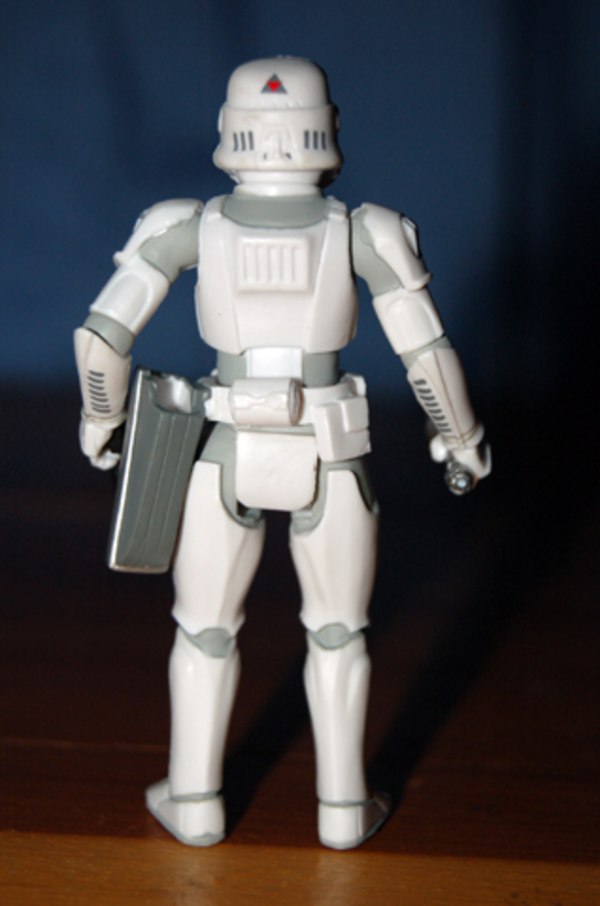 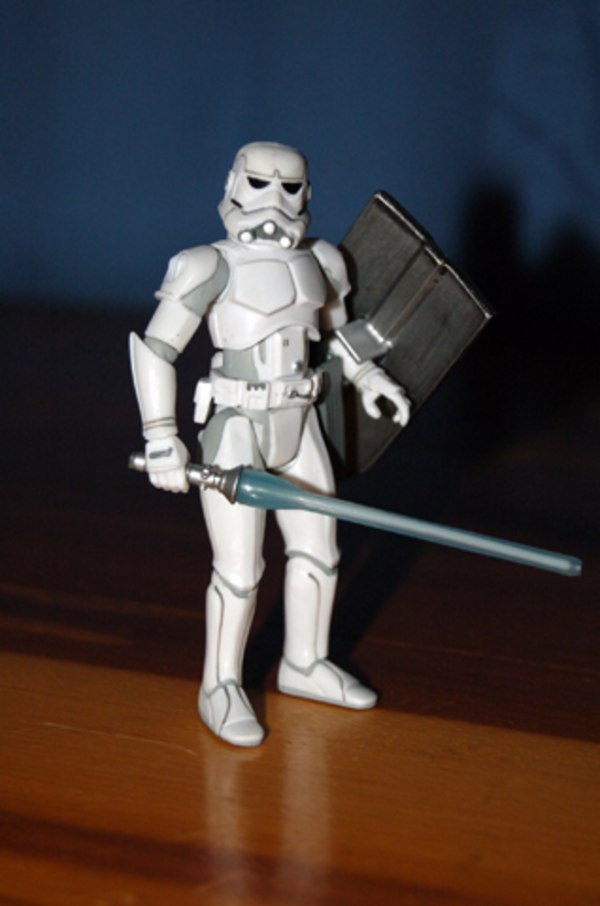 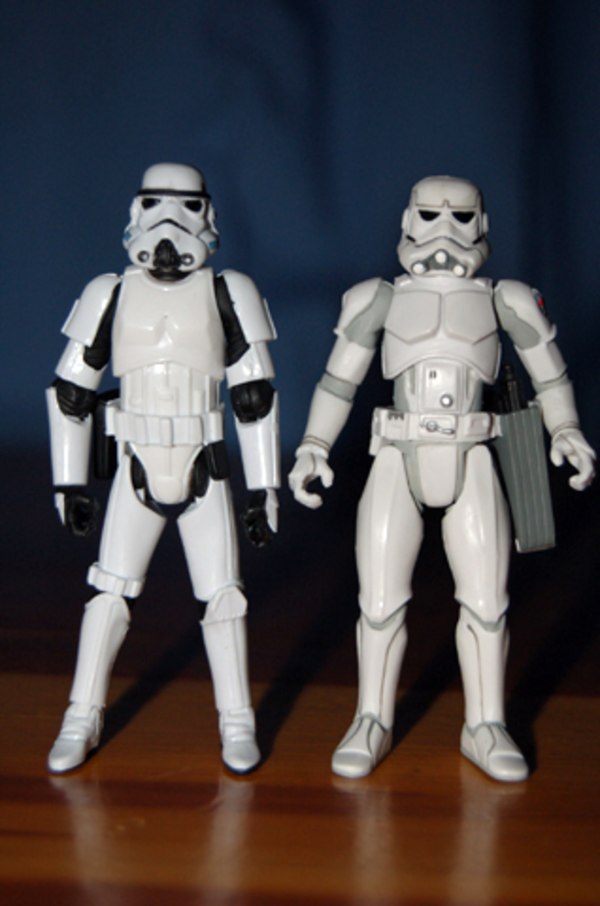 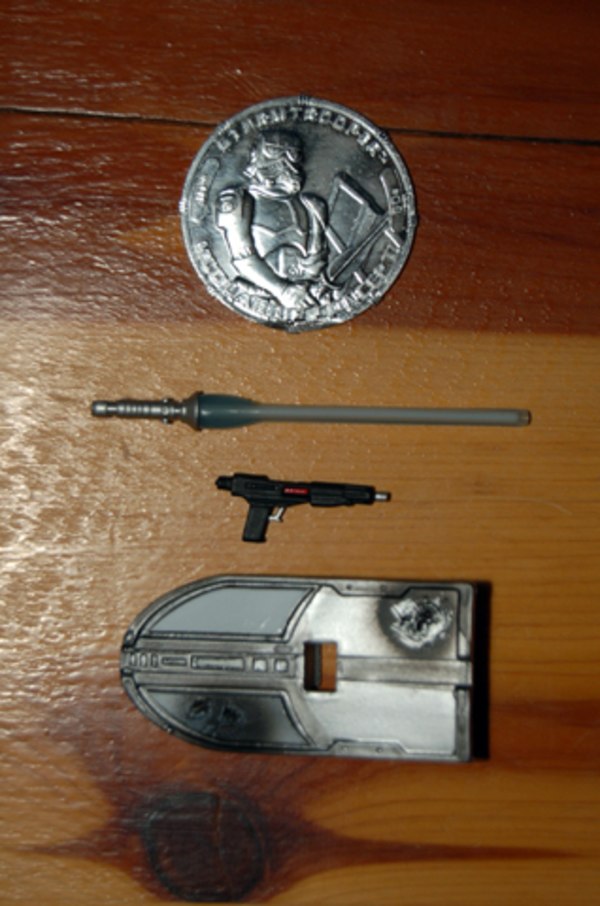