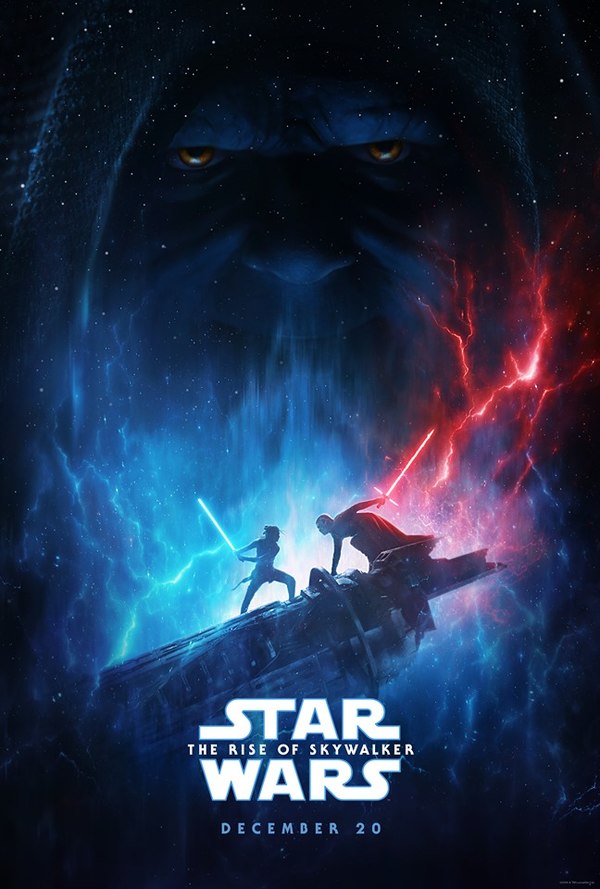 As the Skywalker saga comes to a close, the latest film in the Star Wars franchise, The Rise Of Skyalker finishes its first weelkend at #1, bringing in $176 million in the U.S. and $374 million globally. While it comes in behind the opening weekends of 2015’s “The Force Awakens” ($248 million) and 2017’s “The Last Jedi” ($220 million). it is still one of the biggest debuts of 2019, as well as 'the third-best start for a December release behind “Force Awakens” and “Last Jedi.”'
(Source: Variety)

Palpatine's voice just sends shivers down the spine.I feel like this movie - although looking to be a great stand alone film as Infinity War was - won't be as epic or satisfying an ending as Endgame. With all the glaciers and icy water in the trailer, I'm getting some HTTYD 2 vibes. I really hope the storyline isn't recycled and that J.J puts everything he's got into it. Trailer's great - and I'm heaps stoked to be part of the giveaway. Thanks Jay!

Never in a million years I thought that I would be so not interested in something SW related. I really don't care at all about this movie. Wondering already when will drop on Disney+ so I don't have to endure the hassle that it will be to actually go to a movie theater to see this.

The winner was Jonesycat79. Congrats to them for winning and thanks to everyone who participated.

For all you new folks who came in for the contest, I hope you stick around and maybe check the place out. Our goal is to build up the Star Wars community here and def not opposed to doing more contest like this if it helps in doing that, not to mention when you post in this section it also gets you entered into the monthly TNI Forum contest where we give away $100 store credits to BBTS.

I'm guessing that it isn't me. Because I have no messages in my inbox.

Where did you message them??

I know it wasnt me lol congrats to whoever the winner was!!

Movie looks so beautiful. That Kylo and Rey light saber battle on the water platform...ice world shot...fleet battle shot, I could of sworn I saw The Ghost and that scene with 3CPO brought a tear to my eye.

I for one enjoyed the trailer, though I do understand if this left more to be desired for those wanting to sink their teeth on something substantial. I have a few key visuals that got me excited, particularly that rising shot of the Star Destroyer and the resistance fleet gathering. I am chomping at the bit to see what looks to be an epic space battle, especially on a scale like this.

It seems the marketing is taking a page from endgame and trying to be as subdued as possible to preserve surprises, though thats kinda been consistent with most of the new trailers in this franchise.

Im looking forward to this with great hopes!

I liked the trailer for the visuals, especially the part where Rey and Ben shatter the guy with their sabers.