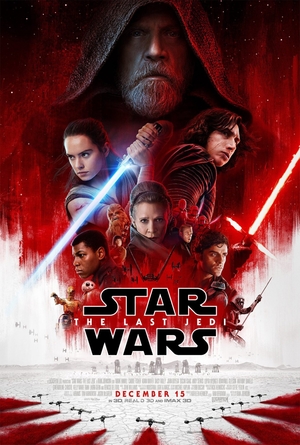 It’s not often I come out of the theater giddy as a kid over a movie. In fact usually when I go into the theater with high expectations for a film, I often come out feeling a little disappointed. That definitely was the case two years ago after first watching Star Wars: Force Awakens. That did not happen with Last Jedi. This one lived up to the expectations and then some.

Now don’t get me wrong. The movie isn’t perfect. There are a few CGI scenes that come off a little iffy and one scene towards the beginning of the film with one of our favorite characters that might stretch the believe-ability boundaries just a little much, but those things are all minor issues.

The action in the film is intense and starts with the first opening scene, and never really lets up much after that. I was glued to my seat for most of the time despite the movie running over 2 1/2 hours.

The movie picks up immediately after Force Awakens. Rey (Daisy Ridely) is still handing Luke Skywalker (Mark Hamill) the lightsaber and the Resistance lead by General Leia (Carrie Fisher) is trying to flee their no-longer secret headquarters after blowing up the Starkiller base in the last movie.

The most disappointing thing about Force Awakens to me was how it seemed to be a carbon copy of A New Hope. Clearly, the team lead by director Rian Johnson took note of this and fixed that for this movie. They threw out the traditional Star Wars plot formula and came up with something filled with twists and turns that will leave you guessing until the very end. Watching this movie is like riding an emotional roller coaster with all the ups and downs. One minute you are laughing with the comedic scenes, and the next you are reaching for that tissue. This pattern happens multiple times throughout the film which really adds to it's impact, especially when you add in that John Williams score that always gets you right there in the ol' heart.

Another thing I found interesting about this movie was how it feels more like an ending to a trilogy instead of the middle act. While we don't get all our questions answered, there are more revelations made than I would have initially thought. I've seen tons of theories and rumors passed around the Internet for this movie since the last one came out, and pretty much all of them were wrong. Despite that however, it still leaves you wanting to find out what happens next, which unfortunately we will have to wait two more long years to find out.

You want to check this movie out, and that's no Jedi mind trick. I still need to see it a few more times to let things really sink in before I am willing to declare this the best Star Wars movie ever, but I definitely feel confident in saying it’s the best movie I’ve seen this year.