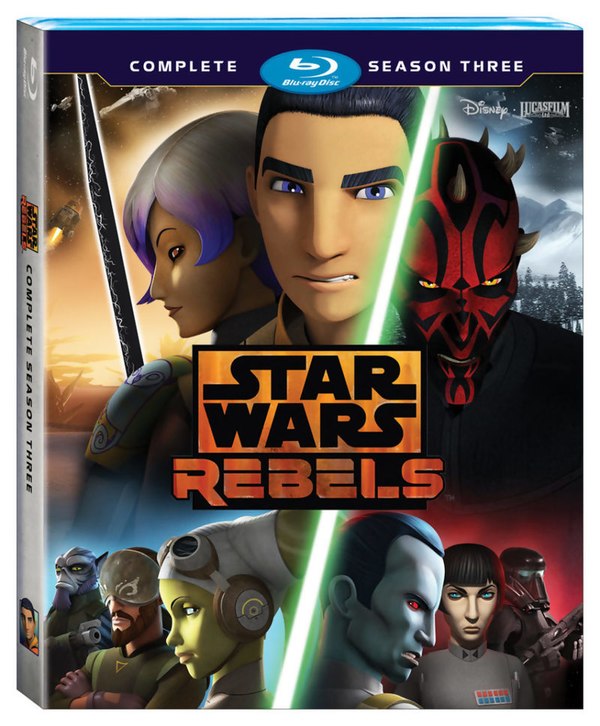 Walt Disney Home Entertainment has officially announced that it will release on Blu-ray Star Wars Rebels: Complete Season Three. The three-disc set will be available for purchase on August 29th.

The story threads begin to tighten in this thrilling season of Star Wars Rebels, drawing connections to The Clone Wars, Rogue One and the original Star Wars trilogy into the series' epic storyline. Star Wars Rebels: Complete Season Three delivers some of the most critically-acclaimed Star Wars storytelling to date, with engaging characters, harrowing conflicts, and spectacular space battles on par with those seen in the films.

Return To Mandalore - Explore where Mandalore fits within the Empire's regime – and whether Sabine can unite her people against the Imperial forces.
Thrawn: A Legend Reborn - Learn Thrawn's significance in Star Wars lore, and what the future may hold for this memorable villain.
Apprentices to Outcasts: Kenobi And Maul - Track two adversaries who've clashed throughout Star Wars history, and find out why the time was right to conclude their story.
The Original Rebel: Saw Gerrera Returns – Extended - Meet the Original Rebel. This exclusive extended version features Forest Whitaker discussing the character he brings to life in both Rebels and Rogue One.
Five Audio Commentaries - Featuring Dave Filoni (Executive Producer), Justin Ridge (Supervising Director), Kilian Plunkett (Art Director), Keith Kellogg (Animation Supervisor) and Joel Aron (CG Supervisor: Lighting & FX)