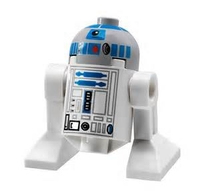 LEGO Star Wars: Droid Tales is a LEGO animated miniseries that retells the stories of the Star Wars universe in chronological order from Star Wars Episode I: The Phantom Menace up through Star Wars Episode VII: Return of the Jedi, through the eyes of C-3PO and R2-D2. Rooted in the humor and excitement that can only be conveyed through the LEGO brick, the five-part, 22 min episode series is a great resource for fans, families and first-timers to catch up and gear up for the next movie!

Following their victory celebration in the Ewok village on Endor, seen at the close of Star Wars: Return of the Jedi, C-3PO and R2-D2 have gathered to regale Luke, Leia, Han, Chewbacca and the other Rebels with the tales of their adventures that led to the events of Star Wars: The Phantom Menace. An accidental kidnapping occurs while the droids are reminiscing and suddenly viewers are taken on a new adventure that leads to encounters with familiar faces and places that prompt the re-telling of the entire saga. The series offers all of the playful humor that viewers expect from LEGO Star Wars.