Jay Cochran - July 22, 2014
Looking to experience the full power of the Force at San Diego Comic-Con? Here is a complete guide to Star Wars programming, including panels on Star Wars Rebels, Hasbro’s action figures, and much more! 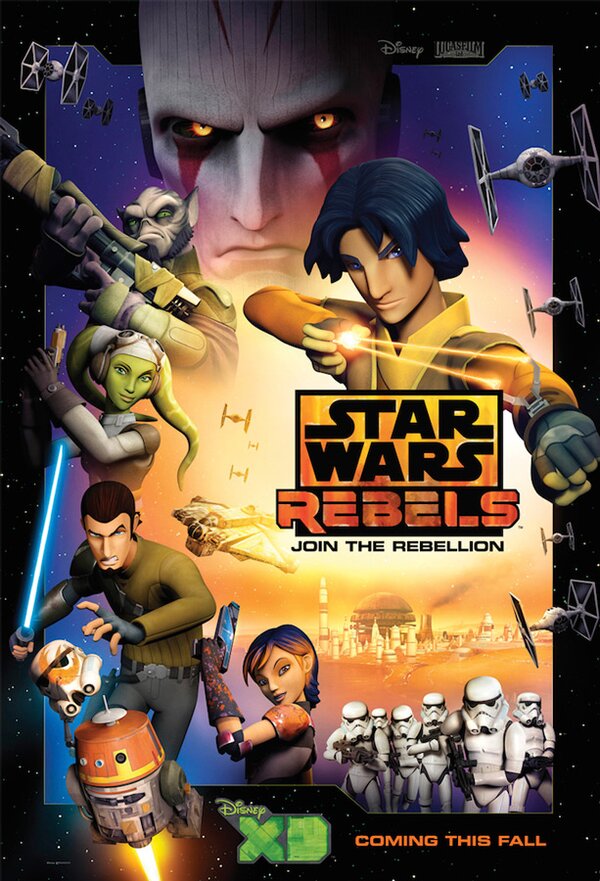 Thursday, July 24
The Heroes of Star Wars Rebels: 6:00 p.m. – 7:00 p.m., Room 6BCF
The Empire. The Rebellion. The Beginning. Star Wars Rebels, Lucasfilm’s highly anticipated animated series detailing the start of the fight against the evil Empire, is coming this fall — but fans can get a big sneak peek at San Diego Comic-Con.

Star Wars Rebels continues the epic tradition of the legendary Star Wars saga with all-new exciting, action-packed adventures. It is a dark time in the galaxy, as the evil Galactic Empire tightens its grip of power from world to world. As the series begins, Imperial forces have occupied a remote planet, ruling with an iron fist and ruining the lives of its people. The clever and motley crew of the starship Ghost is amongst a select few who are brave enough to stand against the Empire. Together, this ragtag group will face threatening new villains, encounter colorful adversaries, embark on thrilling adventures and become heroes with the power to ignite a rebellion.

Scheduled to premiere in the fall as a one-hour special telecast on Disney Channel, it will be followed by a series on Disney XD channels around the world.

With Star Wars: Episode VII creators deep in production in anticipation of the film’s December 18, 2015, release, Lucasfilm will not be featuring the movie at SDCC.

Star Wars Storyboards: The Original Trilogy: 11:00 a.m. – 12:00 p.m., Room 7AB
For the first time, Lucasfilm has opened its Archives to present comprehensive storyboards for the original Star Wars trilogy — the world-changing A New Hope and its operatic sequels, The Empire Strikes Back and Return of the Jedi — as well as never-before-published art from early conceptual and deleted scenes, in a new book from Abrams: Star Wars Storyboards: The Original Trilogy. Former ILM art director Joe Johnston will discuss the newest addition to the Abrams Star Wars library, and the singular experience of creating the iconic trilogy’s storyboards with his stellar art dept team. Johnston won an Academy Award for Best Visual effects for his work on Raiders of the Lost Ark, and has directed Honey, I Shrunk the Kids, The Rocketeer, Jumanji, Jurassic Park III, Hidalgo, and Captain America: The First Avenger. Moderated by Lucasfilm editor J.W. Rinzler.

Saturday, July 26:
Lucasfilm Portfolio Review: 10:00 a.m. – 2:30 p.m., Room PR F
Troy Alders, now art director at Disney Consumer Products, is conducting portfolio reviews, providing critiques, and offering tips to graphic designers. Bring a portfolio selection of your best design work in and see if you have what it takes to create art for the ever-expanding Star Wars galaxy. Graphic Design degrees a plus.

OMG that two pack from the 6 inch Black series are going to drive me broke.Luke with the Wampa and Han with the Tuan Tuan

Do you think Hasbro will provide any update on the Star Wars Vintage Line? or is that line no longer going to be produced ?