The Three Female Rebel Pilots Cut From 'Return Of The Jedi' 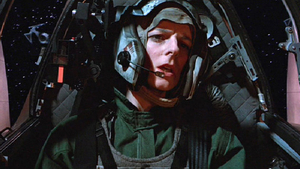 It would appear that even in a galaxy far, far away that the women's liberation movement couldn't gain any ground. In Star Wars: Episode VI - Return of the Jedi, there were three unnamed lady pilots in the movie who didn't make the final cut. Two of the pilots can be seen in the extras for the Blu-ray release of the original "Star Wars" trilogy. Both were A-Wing pilots and one even received the speaking line of "Got it" but the line was dubbed by a male actor in post-production. The second pilot is considerably older and perhaps a retired Rebel? The third female pilot doesn't make it into the Blu-ray extras but she is French actress Vivienne Chandler and spent three days on the set and even had an entire line of dialogue between herself and another pilot. Footage was shot but no longer exists of her flying an X-Wing.

No official explanation as to why these characters were cut but since the movie was released in the 80's and had fuzzy, little Ewoks for kids than maybe Lucas didn't want show women disrespect by blowing them up in space.

Never mind the deleted female pilots...I was so disappointed when I discovered the Toshi Station and Biggs scenes weren't restored for the Blu-ray release. The same goes for the cool scene where Vader is reaching out to Luke through the Force while he's finishing-up his new lightsaber in Return of the Jedi. I sure do hope Lucas...er, someone at Disney (lol) restores these scenes and adds them back in one day. Even if they weren't added back into the films, it'd be nice to see them as restored deleted scenes.

I'd never heard about the dubbed pilot until shortly before the Blu-Ray release, and I still wondered until I saw the cutscenes. (I wish the X-Wing pilot footage had made it as well. :-/) Doesn't the Battle of Naboo make the question of female pilots a moot point though?

That was a female in that photo?

That's what I was thinking?? Could swear the voice matches the face!!

But I def think they did not want to show a female pilot die like that!

That was a female in that photo?

I've got ask why? I mean if it's meant to be PC,it's a dumb reason. From the females they had shown in the series,I always was under the impression they were all officers.

They forgot about the A-Wing pilot's other dubbed line when she flew her flaming ship into the bridge of the Executor: "AAAHHHH!!!" (lol)

I sometimes tend to be one of those rabid fans that devours any and all minutia of detail concerning Star Wars, because let's face it...anything that's even remotely related to it is cool simply by association. But sometimes it can be a little nerdy and too much when they lend too much credence to the most minor of background or supporting characters like these.

Always gotta shake my head and chuckle about stuff like this. Only in SW is such minutia considered "news". Probably because some how, even the most insignificant characters get some sort of fan following.

"No official explanation as to why these characters were cut"

Oh, let me take a stab at it: Because they had enough talking head pilots telling us their ship is gonna blow! and they have absolutely no bearing on the overall story of Star Wars whatsoever?

I love you, Star Wars