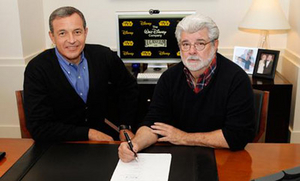 Vulture is reporting they have learned from inside sources that Disney has a leading candidate to write the screenplay for Star Wars Episode VII. According to them Pixar favorite Michael Arndt is up for the job. Arndt wrote the script for the upcoming The Hunger Games: Catching Fire sequel and was nominated for an Oscar for Toy Story 3. He also won an Oscar for the movie Little Miss Sunshine.

Reports say that Arndt has already written a 40- to 50-page treatment for the film and is likely to be at least one of the writers when the Disney/Lucasfilm project begins shooting in 2014. The treatment is expected to soon cross the desk of possible directors such as Brad Bird, Steven Spielberg, and J.J. Abrams.

Vulture also says they have word that the studio is looking to bring back from the original trilogy, actors Mark Hamil (Luke Skywalker), Carrie Fisher (Princess Leia) and Harrison Ford who recently said he was open to the idea of revising his role as Han Solo. Obviously they would be playing much older versions of the characters who we haven't seen on the big screen since Return of the Jedi.