After their ship is destroyed, Anakin Skywalker and Obi-Wan Kenobi must find a new means of escape from the Citadel. They lead the freed prisoners – including the Republic’s Captain Tarkin – across the planet’s perilous landscape as Plo Koon commands a Jedi armada through Separatist defenses in a daring rescue attempt. It’s the thrilling conclusion to a three-part Clone Wars storyline in “Citadel Rescue” – airing at 8:30 p.m. ET/PT Friday, March 11 on Cartoon Network.

For Stephen Stanton, assuming the iconic role of Tarkin – made famous by Peter Cushing in Star Wars: Episode IV A New Hope – was not a responsibility to be taken lightly. Using the first Star Wars film as a starting point and a foundation, Stanton immersed himself in the legendary actor’s filmography and early TV work, while at the same time dissecting the character for clues to Tarkin’s personal trajectory.

“Peter Cushing’s original Tarkin was the epitome of someone who had succumbed to the dark side. [He] is that quiet, elegant, grandfatherly kind of villain that you want to believe in with all your heart. And when you do, he turns on you with a smile and says ‘You’re far too trusting’ – and then destroys everything that you hold dear,” says Stanton. “But since I don’t believe anyone is born evil, I approached the younger version of his character from the standpoint of a career military man who fervently believes that what he is doing is the right thing. That gave me a certain amount of latitude to ask questions of the character – like, what was he like before he embraced the dark side? On one hand, I am using Peter Cushing’s voice and performance as a template, so I want to keep the essence of what he did. But on the other hand, I’m creating the voice of a young Tarkin – who no one has heard before. I think these new episodes challenge our ideas of who Tarkin was in A New Hope more than it reflects his character and what we know about him at the end of his days.”

Accused of “holding Vader’s leash” by the captive Princess Leia in Episode IV, Tarkin has the distinction of being the one Imperial officer with some authority over the menacing Sith Lord. He commands Vader with haughty impunity, publicly dressing down the master of the Force. According to Stanton, that relationship had to start somewhere.

“The relationship between Anakin and Tarkin – and ultimately Vader and Tarkin – is what is being explored now in The Clone Wars,” he says. “Who exactly is this Grand Moff and why is he able to exert control over Lord Vader? It was never fully explained in the films, but we’re getting some hints of how it all might have started. For myself as a viewer, I think Tarkin recognizes a kindred spirit in Anakin. It’s the choices they make and why they make them that will determine their destination. How their story evolves should be quite interesting.”

Tarkin’s not the only familiar face making his Clone Wars debut; airing on April 1 at 8:00pm ET/PT, the one-hour season three finale features a special appearance by everyone’s favorite furball, Chewbacca the Wookiee!
Image 1 of 1 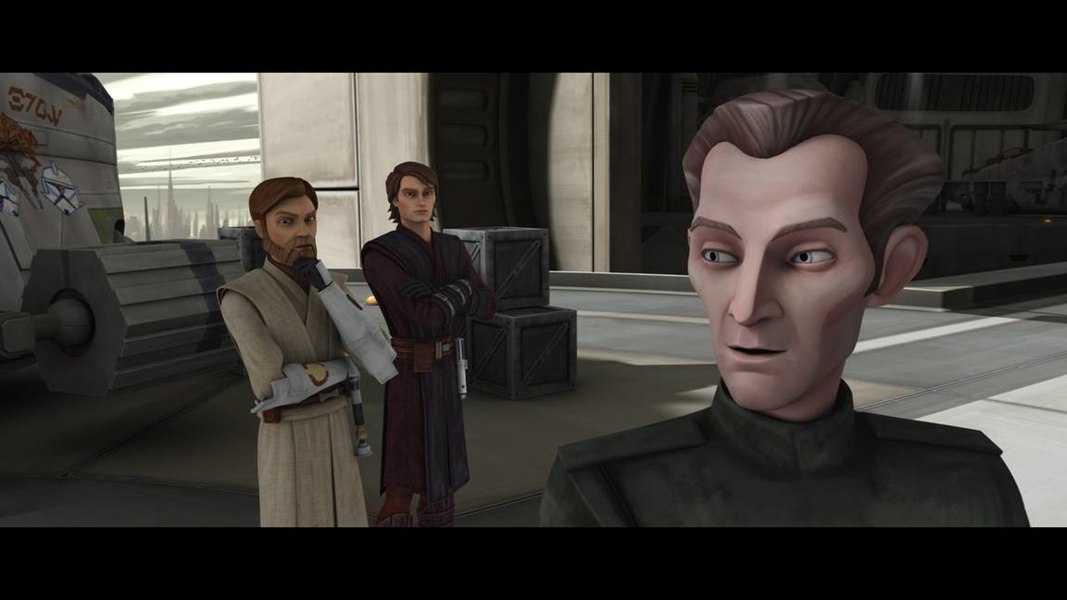