Jay Cochran - January 27, 2011
A mysterious force draws Anakin Skywalker, Obi-Wan Kenobi and Ahsoka Tano to the distant planet of Mortis, where Anakin learns of his destiny from a family of exceptionally powerful Force-wielders. Convinced that Anakin will bring balance to the Force, the family’s patriarch urges the young Jedi to stay and maintain the equilibrium between the light side and the dark side. Glimpses into the prophecy of the Chosen One are revealed in “Overlords,” the first chapter of a three-part Clone Wars storyline, beginning at 8:30 p.m. ET/PT Friday, January 28 on Cartoon Network.

Featuring momentous revelations that could affect the fate of the galaxy and the balance of the Force itself, “Overlords” marks the beginning of a massive Clone Wars arc. There will be revelations and betrayals, as well as all-new perspectives on the very fabric of the Star Wars mythology.

“This is a very important chapter in Anakin’s development,” says Dave Filoni, supervising director of Star Wars: The Clone Wars. “The prophecy of the Chosen One was touched on in the films, but never like this. We’re going to look at what it means for Anakin and the galaxy. We wanted to give it the proper connection to the larger saga. I am very grateful to have Liam Neeson and Pernilla August reprising their roles from the live-action films. They are each so important to Anakin’s journey, and to have them on our series has been incredible.”

In the live-action Episodes I and II, August portrayed Shmi Skywalker – Anakin’s mother. Prompting the fateful first steps that would ultimately bring balance to the Force, she urged her young son to follow in the footsteps of Qui-Gon Jinn and Obi-Wan Kenobi – seeking the promise of a better life among the stars. Asked back to reprise the pivotal role, August recalls her own introduction to the Star Wars family.

“It's funny to be asked back to do a voice for the series, because it makes me recall my screen test for Episode I, all those years ago,” she says. “I was nervous because I am from Sweden and I speak with an accent; I was afraid I wouldn't fit in an American film. But George was so sweet to me. He said that I came from a Swedish galaxy, and it made me feel so much better. I guess anything is possible so far, far away! When I got the part, of course, I was thrilled. I knew only the legacy of Star Wars to that point. That was all any of us knew back then; we were becoming part of something tremendous. What no one could foresee was that it would continue to grow and evolve and thrive as it has, and that it would become so important to new generations. As a mother myself, this is a role that has meant a lot to me, and it is so wonderful that Shmi can live on in The Clone Wars series.”

Returning to the role of Jedi Master Qui-Gon Jinn – who perished in Episode I at the hands of Darth Maul – Neeson remains one of the most venerated figures in the Star Wars canon. Wise beyond even the teachings of the Jedi Order, he was the first to see the potential – and the danger – in young Anakin’s future. His mentor role echoed that of Alec Guinness’ Obi-Wan Kenobi in Episode IV – and reflected a universal motif that runs throughout the Saga.

“There's a nobility to [the Jedi], something classic and universal,” says Neeson. “Growing up, my heroes were cowboys; they were strong and mysterious and it seemed like they always rode off into the sunset. For kids today, Star Wars has that same kind of magic. I really wanted to be a part of that. Playing Qui-Gon was very exciting for me, and it's nice to see that it still means so much to so many people. I remember my initial audition, before Episode I. There was no discussion of the script or the story; it was just a conversation with George, and we spent the entire time talking about our kids. At the end of the lunch, we hadn't even touched on Star Wars - but I got the part. It's fitting that my "audition" was based on that connection, because it's what sticks with me still. These characters resonate with children, even after all these years.”
Image 1 of 1 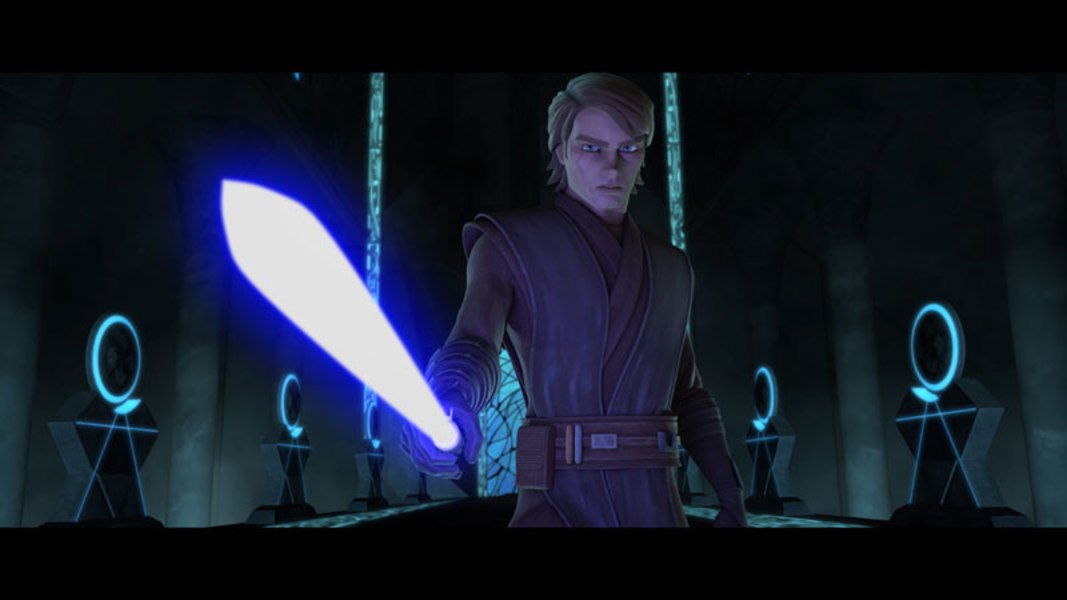 lol , it was a good character for awhile. Not one that would lead anywhere(except a new job). Other than people know who Eugene is , I can't see any reason why he'd want to still keep that character.

It is just that, an act. It made him more money than just being plain old Nick Dinsmore and got his name out there. Why not use that to make more money? Sure we might think it is silly because he acts like that but it is a wise decision to use something that will make him money.

lol , it was a good character for awhile. Not one that would lead anywhere(except a new job). Other than people know who Eugene is , I can't see any reason why he'd want to still keep that character.