Cad Bane Returns to Face-Off Against the Jedi and the Hutts in an All-New Episode of Star Wars: The Clone Wars!

Jay Cochran - November 10, 2010
After being freed from a Republic prison by bounty hunter Cad Bane, Ziro the Hutt finds himself wanted by the shadowy Hutt Council. Ziro makes another daring escape with the help of singer Sy Snootles, but Bane is hot on his trail – as are Obi-Wan Kenobi and Jedi Master Quinlan Vos. It’s a galaxy-wide “Hunt for Ziro” – and it airs at 9:00 p.m. ET/PT Friday, November 12 on Cartoon Network.

On both sides of the episode’s titular hunt is veteran voice actor Corey Burton, who provides both Bane’s laconic drawl and Ziro’s high-pitched theatrics.

“It's actually easier to keep character voices distinctly separate, the greater the differences are in vocal placement, timbre and pitch,” says Burton, who also provides the rich baratone voice of Count Dooku in the series. “When you've got voices that can be segregated, differently textured and expressed in differing musical rhythms, it's a snap to make a clean break from one character to another. Then, applying acting characterization – visualizing the unique ‘soul’ of the character within the parameters of voice – you really can speak as two entirely separate beings within the same imaginary space.”

With its bizarre juxtaposition of such disparate characters within the episode, “Hunt for Ziro” is a strange journey down the rabbit hole – a peculiar departure from the series’ military campaigns and political underpinnings.

“The Ziro episodes seem like a multi-room extension of the original Star Wars cantina scenes – an eccentrically comedic undercurrent to break from the steadier drumbeat of galactic conflict, but with enough sinister gravity to tug at the direction of the entire storyline,” says Burton. “It's a sort of ‘Bizarro World’ funhouse mirror dimension, a wrong turn down a strange alley running along the mainstream militaristic highway. It’s a colorful flight of fancy and insanity, to lend a contrasting air of ‘normalcy’ to the central story construct. Ziro's the ultimate spoiled brat, a bitterly resentful and unreasonably demanding megalomaniac – made even more threatening and duplicitous by his inability to inspire fearful obedience like his rival, Jabba.”

Contrasting Ziro’s villainous frustrations is Bane – cold, cruel and quintessentially capable. Even tasked with a bounty that might seem eccentrically whimsical, Bane never falters in the dogged and dangerous pursuit of his quarry.

“Bane is a cold-blooded ‘Spaghetti Western’ movie bounty hunter – an unflappable contract mercenary who goes about his assignments with ruthless steely-eyed disregard for the damages inflicted to life and property,” says Burton. “He has a stoic tolerance for pain and Jedi mind-control tricks, and tireless reptilian patience. But he is not a particularly sturdy or athletically powerful creature, relying on mechanical aids and sharply honed wits for endurance and safe survival outside of his native environment. Bane is definitely an all-time favorite for me – from his striking design to his iconic and potent personality. There’s such a playground of speech characteristics in his palette that make him a continuing series of spontaneous discoveries. It feels like a very personal original co-creation I can feel proud to be a part of.”
Image 1 of 1 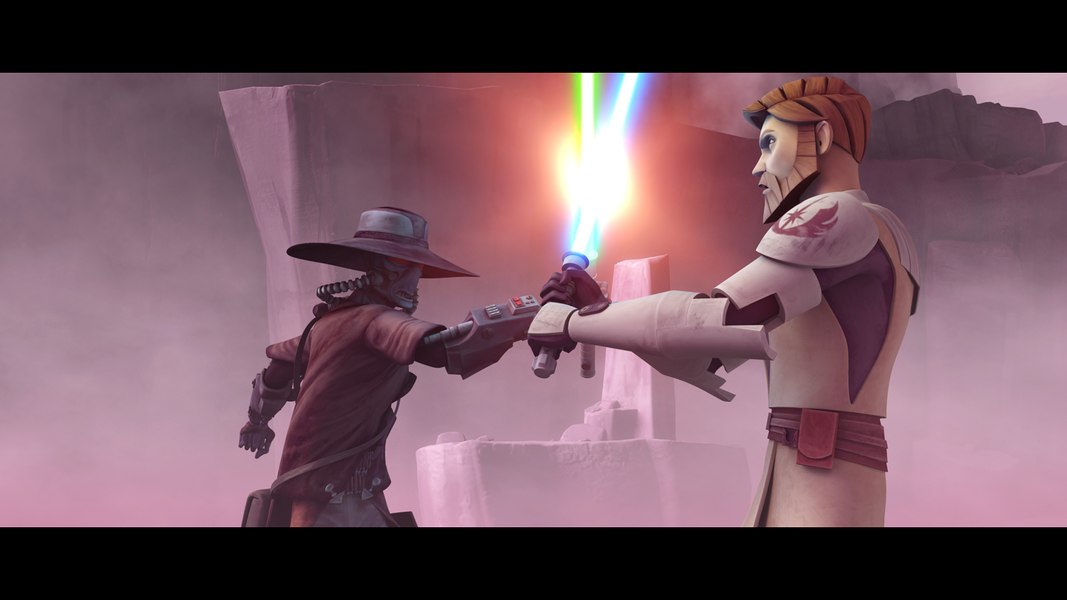