Aurra Sing Returns in an All-New Episode of Star Wars: The Clone Wars!

Jay Cochran - October 19, 2010
She’s BACK! Left for dead after her failed gambit at the end of The Clone Wars’ second season, deadly assassin Aurra Sing has returned – and she’s out to redistribute the balance of power in “Assassin,” an all-new episode of Star Wars: The Clone Wars – airing at 9:00 p.m. ET/PT Friday, October 22 on Cartoon Network.

Tasked with protecting Senator Padmé Amidala during a political mission to Alderaan, Ahsoka Tano is plagued by recurring visions of Sing’s return. Unable to clear her mind, Ahsoka begins to worry that the stress of war is finally taking its toll on her – until the blood-letting assassin reveals herself with an attempt on Padmé’s life. And after their last confrontation left Sing humbled, humiliated and presumed dead, the lean and mean bounty huntress is only happy for a chance at a rematch with the young Padawan…

“Aurra never dies. She gives what she takes and she kind of enjoys it,” laughs Jaime King (My Bloody Valentine 3D, Sin City, The Spirit), who voices Sing in The Clone Wars. “She does have a bad taste in her mouth [after the events of Season Two], but rather than being bitter and angry, she is doing what she needs to do. It’s a very cut-and-dried thing for her. Everything that happens makes her more intense and ruthless. She says bring it.”

Sing’s cruelty and merciless methods have certainly made her a favorite among fans; fascinating audiences with her blink-and-you’ll-miss-it introduction in the live-action Episode I, she’s since been elevated into the upper echelons of Star Wars icons. Her distinctive appearance – creepy yet seductive – plays into that mystique, giving her a visual flair that complements her ruthless demeanor.

“She’s long and lean and lanky, but she has curves. She’s perfect,” says King. “She’s got those long fingers; they’re spidery like she is. Predatory. Her physicality is very much a part of her, and it’s sexy. There are so many people who aren’t inherently beautiful, but their qualities and gifts make them so stunning. It’s the It Factor, and Aurra’s got It. Men love her because she’s hot and badass, and women love her because she’s strong and badass. There aren’t a lot of strong female characters like Aurra.”

Still, while Sing may be “badass,” that doesn’t necessarily mean that she’s all bad, according to King. She may not necessarily be a friendly, compassionate type, but Sing nonetheless has a backstory that provides the drive behind her bad behavior, But don’t expect a comprehensive explanation of those motivations anytime soon.

“There’s a history we haven’t been told,” says King. “It’s up to George [Lucas] and Dave [Filoni] what they choose to show. I have my ideas, but those are secrets I like to hold on to; those are the layers that inform the character when I’m playing her. I’m never just pretending; it’s my job to understand why she does what she does, so that it comes from a place of truth. Each episode reveals more. It’s Star Wars; it touches lives, and I believe it will last forever. I love that.”
Image 1 of 2 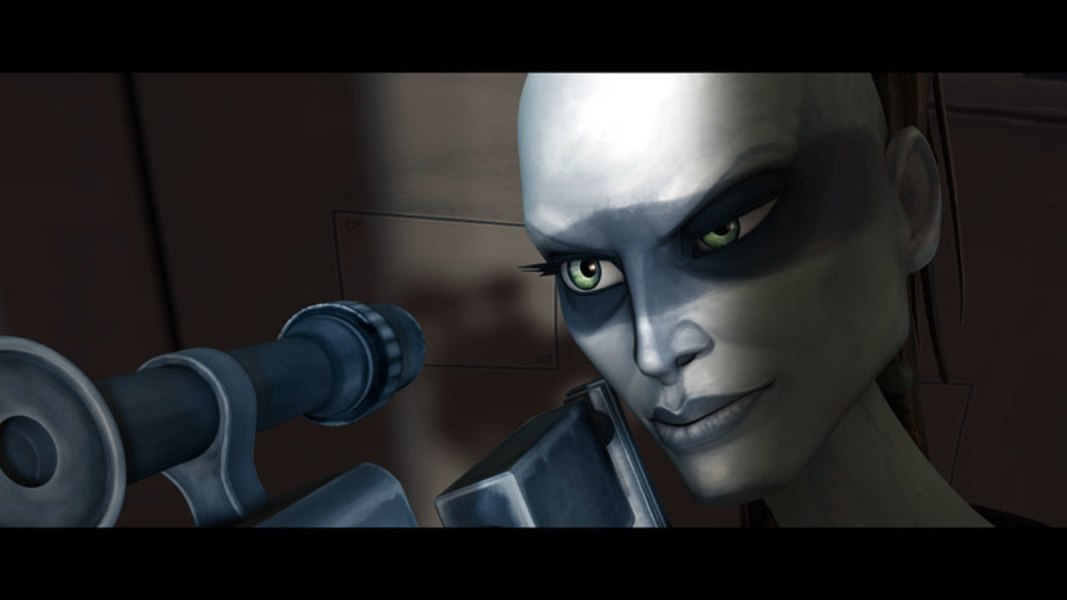 Couldn`t think of what to use for the fans, she was a last minute change to Kitana which doesn`t help. If I can find something that could work I`ll add it.

Those are awesome. But if you can find/make Kitana needs to be rocking' her fans. Other than that sheer awesome.