Lucasfilm Ltd. & JibJab Partner To Celebrate The 30th Anniversary of The Empire Strikes Back

Jay Cochran - May 04, 2010
Available today for the first time ever, people everywhere can cast themselves, family and friends in the classic adventures from ōa galaxy far, far awayö with playful and irreverent two-minute re-tellings of the original Star Wars films by JibJab. Just visit JibJab.com or StarWars.com to feel the Force as itÆs never been possible before ¢ by becoming a part of the Star Wars Saga!

Making a personalized movie with JibJab's Starring You« technology is easy. Users just upload a photo ¢ using a computer, Facebook or a webcam ¢ and use JibJab's simple tools to insert it into the movies. After watching their movie, users can share the video with friends via email, Facebook and Twitter. Custom versions of the videos are available as Premium Downloads for users who want to save them forever on their computers or watch them on their iPhones.

ōWhat better way to celebrate EmpireÆs 30th anniversary than to allow fans to become part of the story,ö said Bill Gannon, Director of Digital Media at Lucasfilm Ltd. ōJibJabÆs inventive technology allows us to experience Star Wars in an all-new way. ItÆs really a great partnership, and we are thrilled with what theyÆve done with the Saga; itÆs lots of fun.ö

Creating and sharing a personalized version of Star Wars: Episode V The Empire Strikes Back is free in commemoration of the fan-favorite installmentÆs 30th anniversary. Star Wars: Episode IV A New Hope and Star Wars: Episode VI Return of the Jedi are available exclusively to JibJab Members. JibJab is a Member-supported company that charges $12 a year for unlimited access to its 1,000+ eCards, Everyday Fun and Starring You videos and pics.

"We aim to deliver a lot more value to our Members than the buck a month it winds up costing them," said JibJab co-founder Gregg Spiridellis. "Star Wars Starring You is a perfect example of the kinds of amazing, special experiences we're working hard to bring our Members."

JibJab was founded in 1999 by brothers Evan and Gregg Spiridellis. In 2004, in a pre-YouTube world, the pair created the smash online hit "This Land" featuring a singing George Bush and John Kerry. Since then, the brothers have built JibJab into pioneering digital media company powering innovative online entertainment experiences like OfficeMax's ElfYourself campaign.

Go to JibJab.com and StarWars.com to experience the Star Wars Starring You fun for yourself ¢ and share the laughs with your friends!
Image 1 of 1 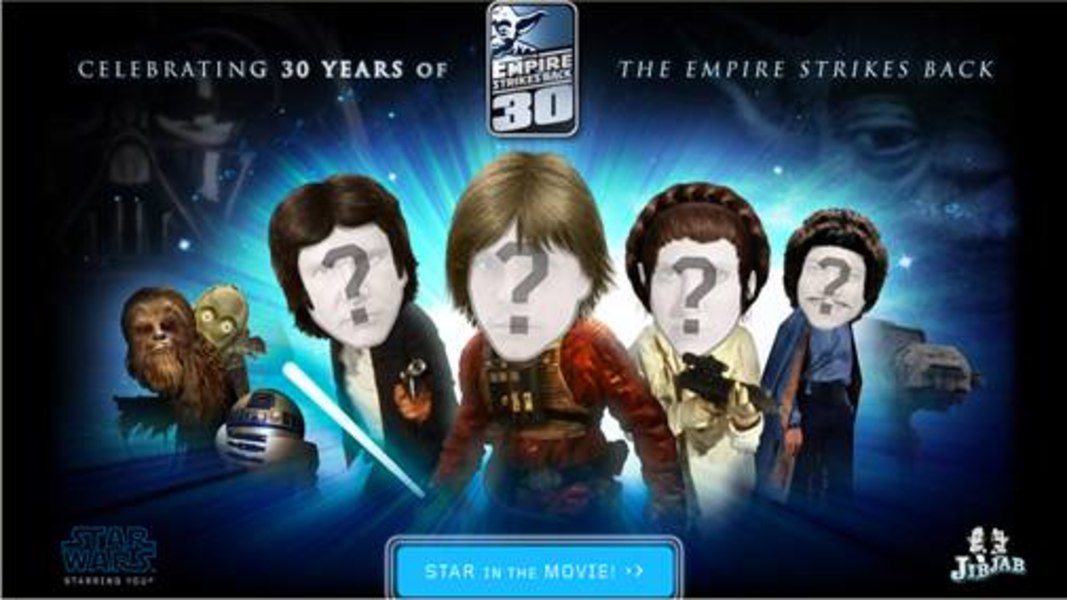