Space Pirates Square Off Against Bounty Hunters and Jedi Knights

Jay Cochran - March 31, 2010
In a rural and remote corner of Felucia, Anakin, Obi-Wan and Ahsoka form an uneasy alliance with four deadly bounty hunters to protect a local village from Hondo Ohnaka and his band of pirates. But Hondo – always the opportunist and never willing to play fair – has plans of his own in “Bounty Hunters,” an all-new episode of STAR WARS: THE CLONE WARS airing at 9:00 p.m. ET/PT Friday, April 2 on Cartoon Network.

Though he may be unprincipled, corrupt, self-serving and deceitful, Hondo represents a return to classic Star Wars archetypes – including rogues and scoundrels such as Han Solo and Lando Calrissian. These intergalactic icons forged their reputations – within that galaxy far, far away as well as among fans – by playing by their own rules and distorting perceptions of right and wrong.

“People want to be seduced. People like a rascal. People like pirates…sort of, as long as they’re not totally pillaging and wreaking havoc,” says Jim Cummings, the voice of Hondo in The Clone Wars. “There’s a certain fascination we have with these bad guys – bikers, pirates, scoundrels, all the Robin Hoods of the world. And Hondo’s so much fun; I really dig him. He’s not a master villain, but he won’t be growing a halo anytime soon, either. The lovable rogue, the lovable rascal. You don’t mind inviting him over for dinner, but you’d better count the silverware after he leaves.”

Though he tends to cause problems for the Jedi Knights and the heroes of the Republic, Hondo is nonetheless a relatively sympathetic baddie – despite his penchant for double-crossing, cheating, back-stabbing and outright wickedness. Besides, that’s all just part of his charm.

“Hondo’s P.T. Barnum. He’s got a little Charles Bronson in him. He’s Harry Mudd, always glad-handing – and the next thing you know, you’ve lost your watch. He’s a conjurer and a maneuverer, and he gets the job done. If he has to a do a little heavy lifting now and then, so be it – but rather than go the way of the bicep, he prefers to develop a little craft. At the end of the day, when everyone counts their stacks, his will be a little bigger than yours – and you won’t even know how it happened. He’s an opportunist, but if there’s a nickel holding up a dime, he’ll move on. He weighs his results against the effort it takes to get them; if one outweighs the other…NEXT!”

Cummings – whose voice-acting credits run the gamut from Winnie the Pooh (and Tigger, too) to Robot Chicken and comic book superheroes – found himself reveling in the Clone Wars production process, which has allowed him to fully articulate, expand and embellish what might otherwise have remained a mere supporting role in the Star Wars galaxy.

“The process in Clone Wars is so great; I just love it. It’s unique, because there aren’t too many productions that put the whole cast in the room. It’s so rare. Sometimes there’s a production assistant, but they’re just reading the lines off the page – like a robot. But when you have other actors in the room and you’re really working it, you can bounce back and forth. It makes the process what it should be and what it is – which is a live, organic thing. If you can come up with something within the story, which contributes to the story, that’s always welcome. This is gumbo where everyone gets to put in an ingredient. Coming from the theater especially, coming from a million plays – well, it’d be tough to do Okalahoma standing on the stage alone. This is simply so much more rewarding.”

As for honing in on Hondo’s signature voice – that cool and confident combination of snake-oil salesman and hardened mercenary – Cummings looked to the icons of his childhood for inspiration.

“There are indistinct accents that are familiar, to an extent, but still sound foreign – like when Roman centurions have British accents in gladiator movies. It lets the audience know that this is an Other, and yet we can still identify. It’s relatable,” he says. “Coming up with Hondo’s voice, I looked to one guy who had always fascinated me: Yul Brynner. As a kid, I’d think, ‘Where the HECK is this guy from?’ But you could buy him as the King of Siam, or as a cowboy in The Magnificent Seven, or as a robot in Westworld. I don’t do a great impression of Yul Brynner – but if you do a bad impression of someone, it becomes a new voice, a new character. So I just poured a lot of sand on my bad Yul Brynner – for texture – and that’s Hondo. But I don’t try to think about it too much; I always say that instincts are the best-stincts.”
Image 1 of 1 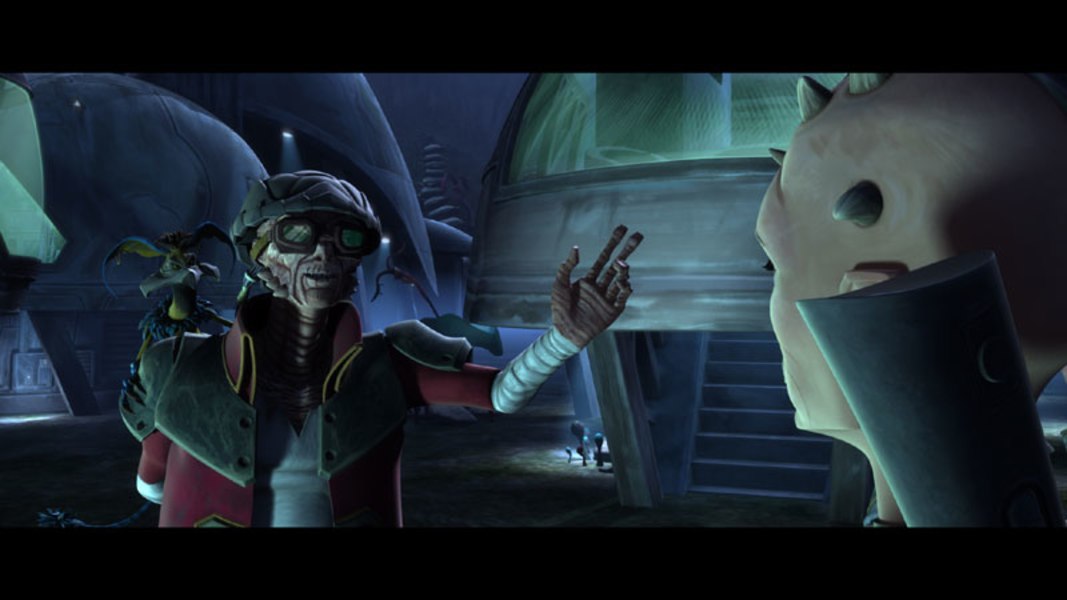