Jay Cochran - January 19, 2010
When a wily pickpocket steals Ahsoka's lightsaber during an otherwise routine mission, the desperate Togruta teen must enlist the help of an elderly Jedi Master to track down the slippery thief. The search takes the unlikely pair deep into the seedy underbelly of Coruscant’s seamy underworld…and pits the young Padawan against a new kind of threat, unlike anything she’s seen on the front lines. It’s a race to reclaim both her weapon and her honor in “Lightsaber Lost,” an all-new episode of STAR WARS: THE CLONE WARS airing at 9:00 p.m. ET/PT Friday, January 22 on Cartoon Network.

For Giancarlo Volpe – the episode’s director – “Lightsaber Lost” provided a welcome opportunity to draw back from the high intensity action of the front lines, exploring the characters against a different tonal backdrop altogether. While still boasting one of the series’ most memorable action sequences, the episode also focuses on an unlikely juxtaposition – and the quiet humor that results from Ahsoka’s new friendship.

“Comedy belongs in Star Wars as much as anything,” says Volpe. “Filmmaking actually plays a lot off of contrast – such as the contrast between a wicked villain and a benevolent hero, or between slow, emotional scenes and really fast-paced action. The more you emphasize one side, the more extreme the other becomes. They work hand in hand. I think if Clone Wars always took itself too seriously, it would no longer feel like the movies.”

The very character dynamics of the episode itself are marked by distinct contrast, deliberately pairing the impulsive Ahsoka with Tera Sinube – a wizened old Jedi Master. Modeled after a seasoned, elderly samurai who improves – and mellows – with age, Sinube teaches patience, temperance and deliberation to the impetuous Padawan.

“He's definitely a caricature of his own philosophy. He keeps telling Ahsoka she's too frantic and moving too fast. She needs to slow down and really listen to her intuition, and trust her feelings. We played that up in everything from the way he moves to the way he talks,” says Volpe. “To me, it's very much like Obi-Wan telling Luke to trust his feelings, and to use the Force during the attack on the Death Star. Ahsoka is so anxious about getting her lightsaber back, her own anxiety interferes with her ability to track it down. When she stops and calms herself, the truth is revealed. That's great stuff! It's just one of those classic spiritual aspects of Star Wars that I can't get enough of.”

Ultimately, these contrasts are the building blocks for the Star Wars universe – the tools that its creators use in crafting that timeless and intangible feeling of the iconic “galaxy far, far away.” Supervising Director Dave Filoni cites the episode as an essential departure from the frenetic intensity of the front lines, and an integral piece of the larger Saga.

“To a certain extent, audiences are coming to expect the combat storylines from the series, but there’s a lot more to Star Wars than the war itself; I think this episode really resonates because it captures a particularly nostalgic aspect. We got to focus on aspects that don’t get as much screen time when we’re in the middle of a battle,” says Filoni. “It’s also interesting to look at the various influences on Ahsoka from a different perspective. She’s being trained by Anakin, who eventually becomes Darth Vader. It’s an interesting dynamic, because we don’t necessarily know what happens to her – except for the fact that she doesn’t appear in Episode III. Because we see her in these high-intensity situations, it’s easy to forget that she’s still a child and that she’s impressionable. She’s definitely still learning – from Anakin, but also from her own experiences, from her mistakes, from those around her. She’s making her own choices, deciding her own values. How that will affect her ultimate destiny remains to be seen. When we screened this episode for the crew, almost everyone ranked it among their favorites for the season; I think it’s because it stirs up some of those questions, and in a way that has a distinct Star Wars feel.”
Image 1 of 1 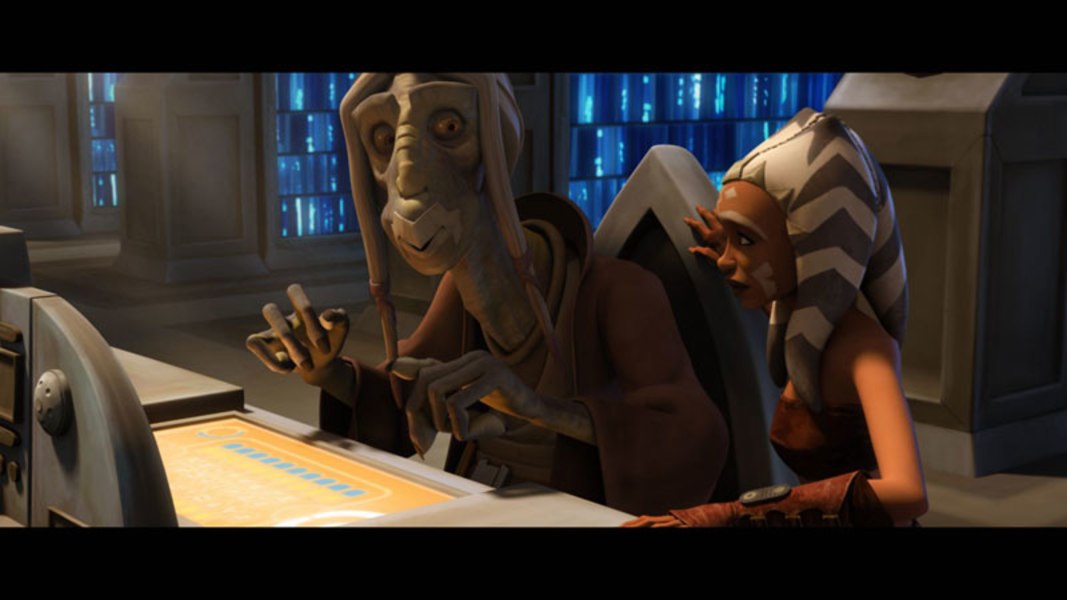