Jay Cochran - December 29, 2009
Kicking off the New Year with a special double-dose of STAR WARS: THE CLONE WARS, General Grievous emerges from the shadows to stir up trouble for the Jedi heroes, ensnaring them in a trap that threatens their mission and their lives. It’s a deadly game – and the scheming Separatist cyborg doesn’t plan on playing by the rules! It’s a full hour of all-new CLONE WARS thrills, beginning with “Grievous Intrigue,” at 9:00 p.m. ET/PT Friday, January 1 on Cartoon Network. And the intergalactic action continues with a clone showdown in “The Deserter,” pitting brother against brother in a battle of ideologies.

Working from a secret message transmitted by a Jedi held prisoner by General Grievous, Obi-Wan and Anakin use the information to set a trap for their bitter enemy. But their plan backfires when Grievous springs a trap of his own. With their mission on the verge of disaster, Obi-Wan must battle Grievous while Anakin struggles to enact their escape.

For Matthew Wood – voice of General Grievous in the series and the live-action Saga, as well as supervising sound editor for THE CLONE WARS – the episode offers a welcome return for the series’ quintessential bad guy, providing an opportunity for the cybernetic antagonist to gain a long-awaited advantage over his Jedi adversaries.

“I see Grievous' hatred of the Jedi stemming from intense jealousy; the Jedi have a skill that has been unattainable by Grievous,” says Wood. “Even though the technical skill of the lightsaber has been taught to him by Count Dooku, Grievous still lacks the Force sensitivity to grasp the true nature of the Jedi. So many things seem just out of reach to Grievous, intensifying his jealousy and frustration.”

To make matters worse for the General’s consistently thwarted ambitions, Grievous is saddled with an ineffectual army of comically inept battle droids – all of whom are also voiced by Wood. The dichotomy allows Wood to inject a bit of aggravated humor into his performance.

“Grievous is put in command of a massive droid army, yet the droids lack the skills to overtake the Jedi. The absurdity of the juxtaposition of those characters enhances my ability to portray them, especially because I record both Grievous and the battle droids continuously,” he says. “The droids are so limited by their mass-produced, low-cost processors and will never see the bigger picture of the war; their comedic navel-gazing will always be their undoing. While the General wants to be more of a leader and game-changer in the war, he has so far only been good at stalling our heroes. Personally, I like all of the moments of Grievous destroying battle droids, the ultimate manifestation of his frustrations. I play the droids and Grievous as a twisted Abbot and Costello routine.”

Behind the scenes, Wood is thrilled to remain such a central part of the Star Wars universe, relishing the chance to explore and expose his character’s motivations, while at the same time marveling at the opportunity to work in a world that had been so integral in his own professional and creative development.

“I was five years old when A New Hope was released. Star Wars stimulated my imagination on both a technical and storytelling level,” he says. “The first time I was even aware of the role that a film director played in making a movie was when I saw an image of George Lucas sitting with Alec Guinness on the set in Tunisia. I remember thinking, ‘I know who Obi-Wan is, but who is that other guy sitting next to him?’ And now, I’m working with him. Even after nearly twenty years with the company, it still feels like a dream to be involved in the creation of this fantasy universe.”
Image 1 of 1 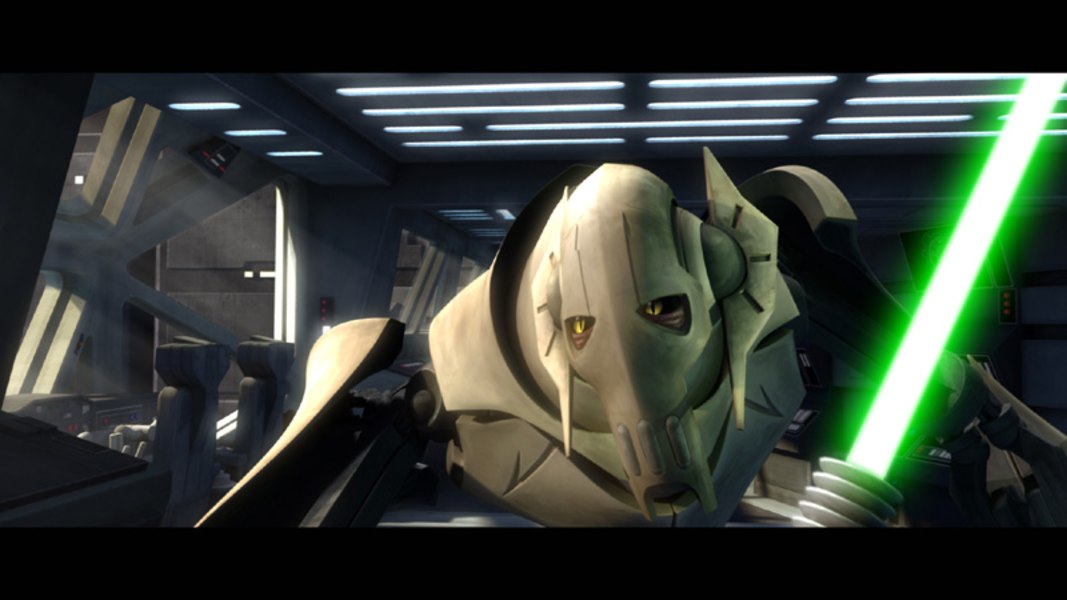