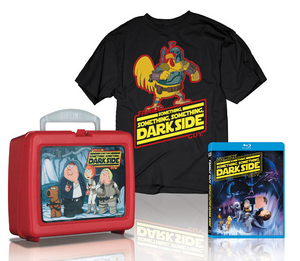 “Family Guy” fans and Star Wars aficionados alike, promise to have a very special holiday with Twentieth Century Fox Home Entertainment’s limited edition “Family Guy: Something, Something, Something, Dark Side” Blu-ray Disc Collector’s Set – only available at Best Buy. The farce is strong for fans with this exclusive set as it includes a new specially created Lucasfilm-approved lunchbox - based on the original 1980’s fan-favorite The Empire Strikes Back box and featuring the Griffin gang – Peter as Han Solo, Lois as Princess Leia, Chris as Luke Skywalker and Brian as Chewbacca. The set also comes with a t-shirt emblazoned with

“Family Guy’s” ever-popular character Ernie the Giant Chicken as Boba Fett and a Blu-ray Disc of the new feature.

“’Family Guy’ and Star Wars are two franchises that continue to have fans with shared enthusiasm that is unrivaled. We wanted to create something special for them in honor of “Family Guy: Something, Something, Something Dark Side,” said Mary Daily, Executive Vice President, Marketing, Twentieth Century Fox Home Entertainment.

The follow up to the Star Wars spoof Blue Harvest, the saga continues in “Family Guy: Something, Something, Something, Dark Side.” Luke, Leia, Han Solo and Chewbacca have evaded the dreaded Imperial Starfleet led by the cunning, conniving and curiously short evil lord Darth Vader (Stewie), setting up a new secret base on the remote ice world of Hoth. With the rebellion in trouble, young Skywalker must take the advice of his late, and rather lascivious, mentor Obi-Wan Kenobi (Herbert) and learn the ways of the “farce” under Jedi Master Yoda (Carl) to save the galaxy once and for all. 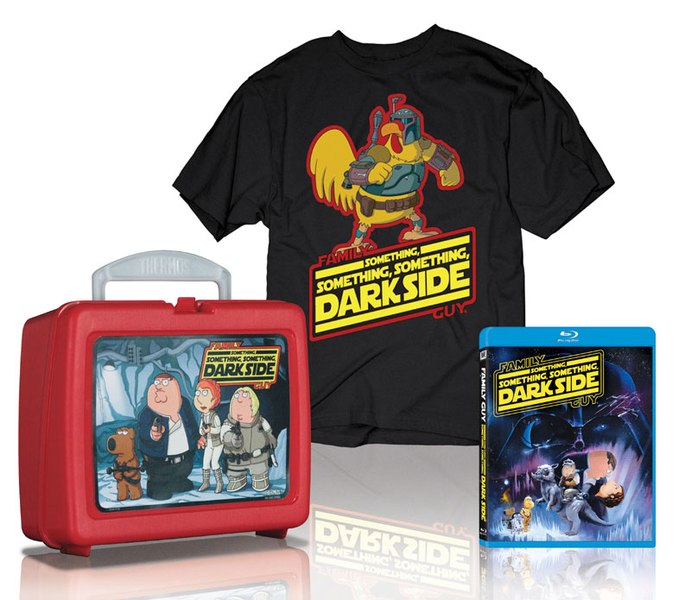