Jay Cochran - March 19, 2009
Here is a new trailer for this Friday's season finale for Star Wars: Clone Wars which will air at 9 p.m. ET/PT on Cartoon Network. Also after you watch the trailer scroll down and check out a few new images from the episode in our Gallery as well.

The heroes of the Republic have repeatedly beaten back the assaults orchestrated by the evil Separatist forces, but an entirely new threat – lethal mercenary Cad Bane – will emerge from the shadows in “Hostage Crisis,” the thrilling conclusion to the first season of STAR WARS: THE CLONE WARS, airing at 9 p.m. ET/PT Friday, March 20 on Cartoon Network.

Count Dooku seeks to spring a Separatist prisoner from Republic captivity, but his profile prevents him from getting close enough to set in motion his malevolent plan.

Enter Cad Bane, the galaxy’s most fearsome bounty hunter, as ruthless as he is deadly. He is quintessentially cold, cruel and calculating – and when the price is right, he can’t be stopped. Backed by Dooku and the Separatists, he’s bringing his unique skill set and impressive arsenal to bear against the very heart of the Republic. Bane brazenly brings the fight to the Senate’s doorstep, with a rogues gallery of galactic scum as his allies.

“This episode gave us the chance to do something totally different, to go in a new direction with the series,” says supervising director Dave Filoni. “We’ve seen the good guys and the bad guys, from the top of the food chain to the cannon fodder on the front lines. Now we get to look at some of the opportunists, at the mercenaries operating without a side. It’s a whole new dynamic we haven’t seen yet, and at the same time it’s very Star Wars.”

Patterned after the laconic gunslingers of spaghetti Westerns, Bane is lethally cool and relishes being a bad guy. He is unflappable in the face of danger, and even welcomes the opportunity to pit his formidable skills against the legendary prowess of the Jedi Knights. Filoni says the inspiration from the red-eyed bounty hunter came directly from George Lucas.

“He had a clear idea for this bad guy who plays by his own set of rules, whose moral code is dictated by his fee,” says Filoni. “And he had sketches and concepts dating back to the original films. If Boba Fett was sort of the Man With No Name of the Star Wars galaxy, then Cad Bane is his counterpoint – his Lee Van Cleef. So that’s how we built the character, with that in mind. It’s a cool parallel to our world, and a cool balance in theirs.”

Making his STAR WARS: THE CLONE WARS debut in Friday’s season finale, Bane has already established a place as a fan-favorite – among the series’ creators and crew.

“The crew loves Cad Bane, and I really think the fans will, too,” says episode director Giancarlo Volpe. “He brings a serious bad-ass sensibility to Star Wars. He’s a lethal and ruthless bounty hunter, and you see that right away in the episode. Unlike Boba Fett, Cad doesn’t take prisoners.”
Image 1 of 4 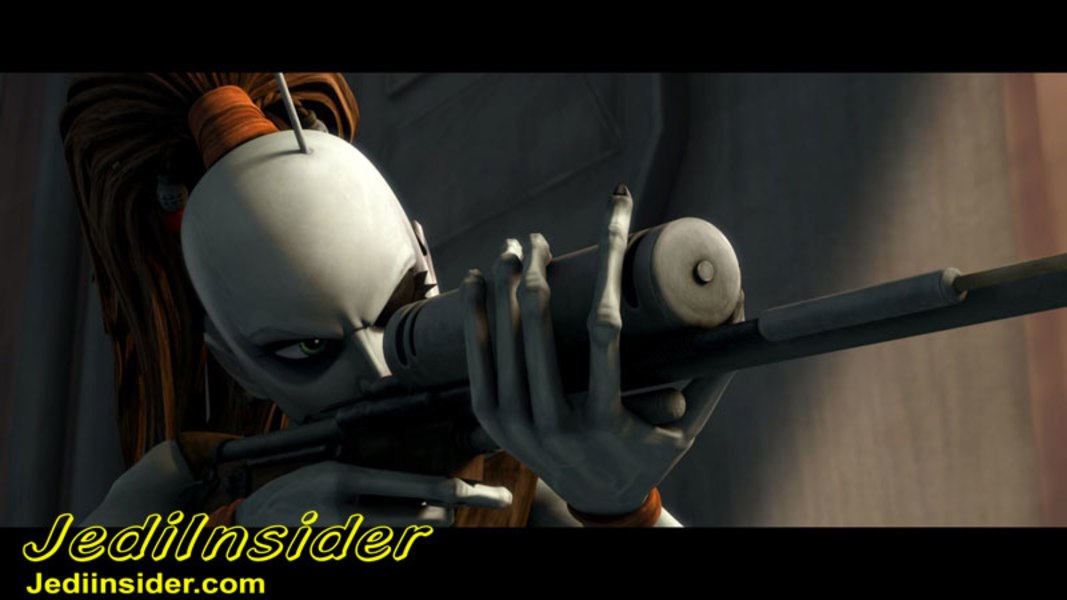 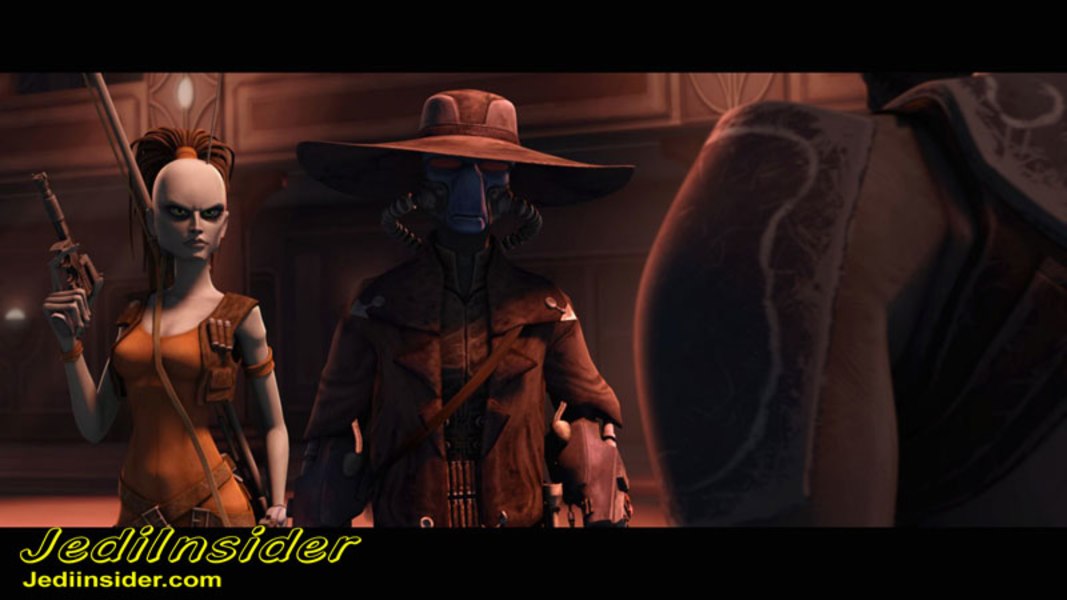 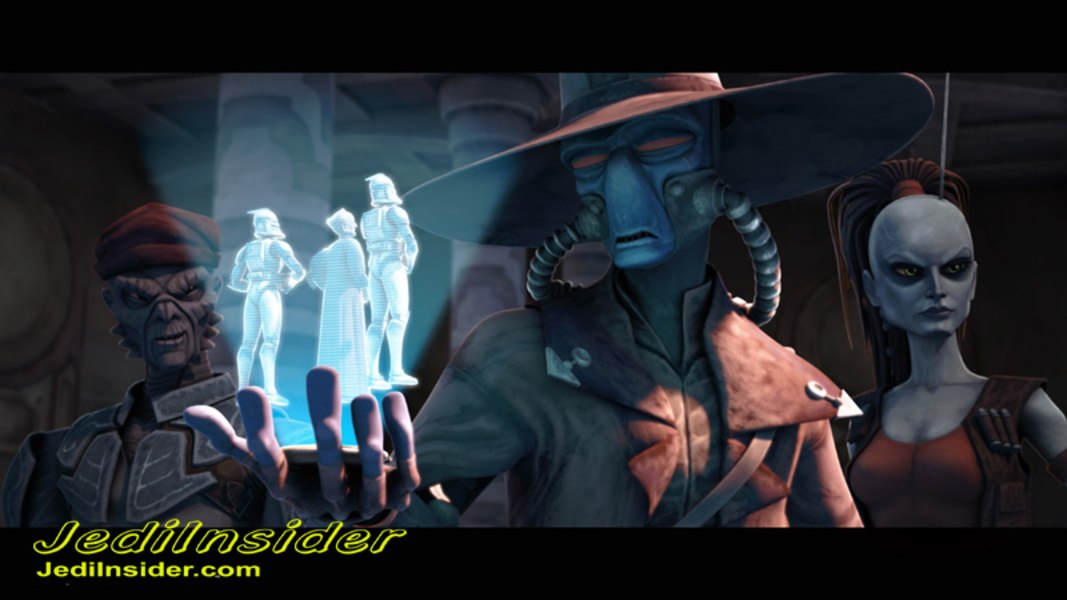 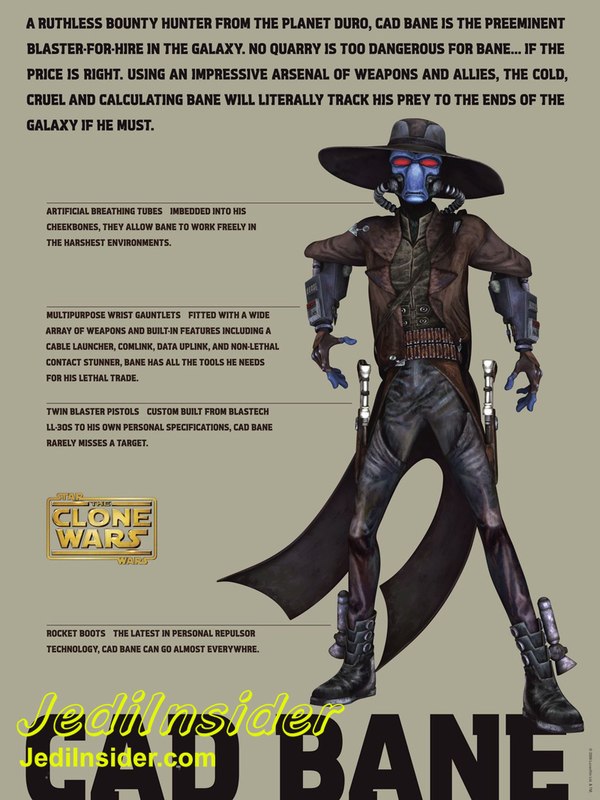