Bespin refugee - May 11, 2014
This week's JediInsider Custom was done by Hemble Creations, he has repainted a 6" scale Black Series Luke Skywalker (X-Wing Gear). Here is the story behind it, and how he describes the making of it:
"Hi All,

While on a routine patrol in the Melholtor System Luke's X-wing begins to navigation and thruster malfuctions, he and R2D2 try to repair the problem but to no avail. Luke decides that he will have to make a force landing on the 3rd planet of the Melholtor System and sends a distress call.

After the force landing in a small and shallow waterway Luke picks up a signal of a incoming landing craft and thinking it to be a Rebel Search and Rescue craft he is soon relizing that a Imperial Scout Shuttle has picked up his distress call and now are on his way to his location.

After ordering R2 to stay with the ship Luke starts to head of and find the Imperial crew but it only takes a few minutes before he realizes that they have found him so Luke pulls out his Light Saber ready to defend himself, R2 and his ship.

Figure - Luke is from Hasbro's 6" Black Series line and was positioned into a pose I liked and then the joints were superglued and then puttied. Instead of painting over the figure I firstly added thin strips of tissue paper by applying watered down PVA glue the tissue to give the outfit a more fabric feel to it, once the tissue paper had dried I painted and weathered the figure using Vallejo and GW paints.

Base - The base was done using left over foam core layered ontop of each other and glue togther using superglue. Once dry I marked out the feet and helmet areas and then cut the foam and removed the foam, I then inserted the figure and helmet using superglue.

The water was done by using plaster of paris to cover the base and just before the plaster dried I used a plastic spoon and lightly flicked it over the plaster to simulate movement in the water. I then used Woodland Scenics Water Effects went over the plaster waves so that it would give more of a ripple affect.

The ground work was done by using dirt and mulch from the garden and the plants and undergrowth are plastic fishtank plants and Army painter shrubs. Once all the plants were added the water was painted using GW paints and once dry I then used Woodland scenics Realistic Water mix with a little flat white to give the water affects a more frothy look.

Click here if you would like to submit your own custom figure(s) to be displayed on JediInsider.com, and be sure to check out our Custom Forum section, where you can discuss and show off your work among other customizers. 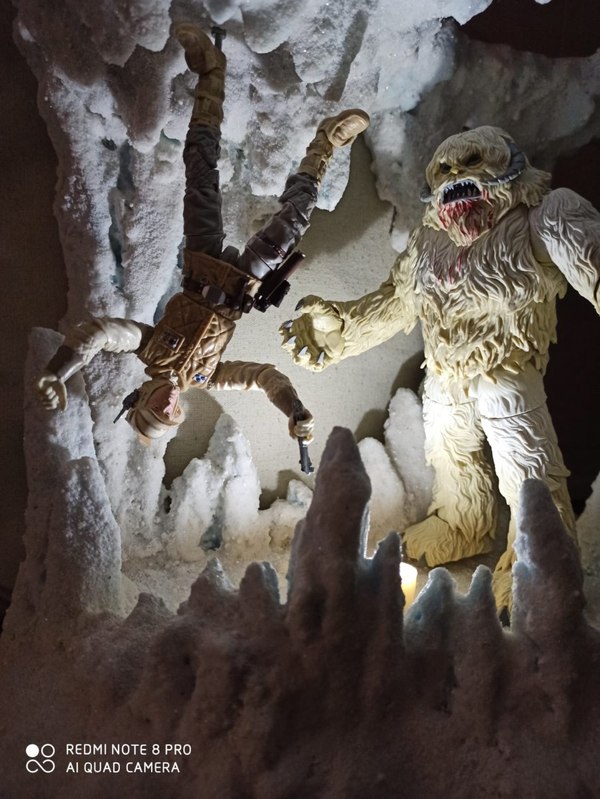 Jedi Insider Star Wars Photo Of The Day: "Sippys" By Shooting The Galaxy

Jedi Insider Star Wars Photo Of The Day: "Bespin" By Shooting The Galaxy